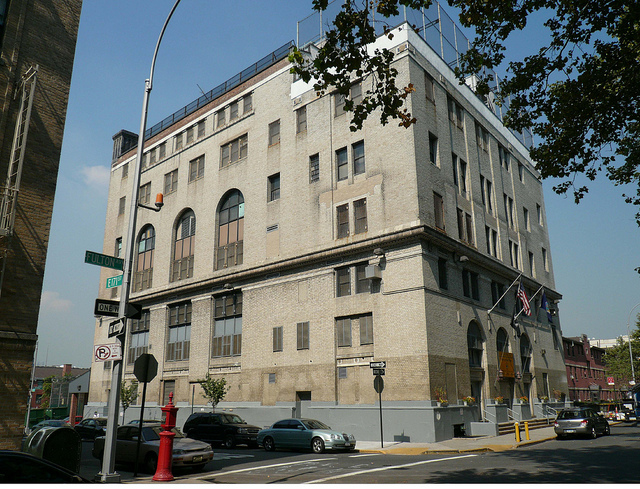 ALBANY, N.Y. — As the state's prison population shrinks and former prisons in the city go empty, some advocates for ex-convicts say they have a vision for what do with unused correctional buildings: repurpose them for re-entry programs.

One group is pushing to transform the Bayview Correctional Facility in Manhattan into a center for job training, educational opportunities and housing for former prisoners. The all-women facility was evacuated during Hurricane Sandy and its inmates shipped upstate.

And, in the Bronx, another group plans to transform the former Fulton Correctional Facility, an imposing, seven-story structure, into what could be the city's largest re-entry center, complete with entrepreneurship opportunities and temporary housing.

Ann Jacobs, the director of the Prisoner Reentry Institute at John Jay College of Criminal Justice, said she knows of no other example in the country of a former prison being reused for re-entry services. "I think this is a bold, inspiring idea that will catch on," she said.

There is a certain logic to these plans. About 60 percent of the state's prison population is from the city's five boroughs, and advocates have long argued that it makes no sense to ship them far upstate where it is almost impossible for them to keep connections with their families and reintegrate into their communities once they get out.

Although advocates were displeased that the Cuomo administration chose to shut correctional facilities in the city — Fulton and Arthur Kills Correctional Facility in 2011, and Bayview this year — they see repurposing the prisons for re-entry programs as a way to provide inmates with services they need while keeping them close to home.

The Osbourne Association, a group long involved with helping ex-convicts to readjust to life after prison, is backing the plan to transform the Fulton prison.

“It was clear to me it was doomed. I said if I was going to close a prison, Fulton just makes sense,” said Osbourne Association Executive Director Liz Gaynes, noting that Fulton was a minimum security prison and that the state had an abundance of those upstate.

Greenhope Services for Women, Inc., an organization that works with prisoners at Bayview, hopes to reuse that prison mainly for housing for former female prisoners.

Anne Elliot, of Greenhope, said the stability of long-term housing could allow former female prisoners to get an education, perhaps even a college degree. "That will really extend the opportunities available to them,” Elliot said.

It is extremely difficult for former prisoners to find housing, and ex-felons are not eligible to live in public housing.

Elliot said she hopes that the Cuomo administration will consider the money the state will save by preventing recidivism by giving former female prisoners a place to live when they look at her proposal to transform Bayview. The property is estimated to be worth around $40 million. She said they have yet to approach the Cuomo administration about their plan to repurpose the prison.

The comment was seen by many as a statement of purpose that Cuomo was going to shut down upstate prisons that can be the lifeblood of small towns. But when the administration announced seven prisons it intended to close in July of 2011, many observers were struck that of the 3,800 beds that would go empty, half of them were in New York City. And more city facilities have been scheduled for closure since then.

Elliot says the closing of Bayview put her organization “between a rock and a hard place,” because it was a women’s work release correctional facility located in Manhattan with direct access to the boroughs where most of New York’s inmate population comes from. Sen. Brad Hoylman of Manhattan has Bayview in his district and says the loss of the facility will hurt the rehabilitation process of female prisoners who were being kept close to home. Hoylman said he wants to see a "community based process" to decide what should be done with Bayview.

“People come out of prison with a strong desire to live a different life but they encounter a lot of barriers,” Jacobs said. “They usually don’t have a strong education, they are poor, housing is hard to find, they don’t have much of a job history. Having a criminal conviction can create even more barriers. They come out thinking, 'I have a scarlett letter.'”

A 2011 report by The Pew Charitable Trusts found that if New York reduced it’s recidivism rates by just 10 percent it would save $42 million a year. The current recidivism rate is slightly under the national average at about 40 percent.

The Bronx could use particular attention because it has higher rates of people incarcerated and on probation than most of the state: There are 4,700 Bronxites on parole and 10,000 on probation supervision, according to 2011 data from the New York State Division of Criminal Justice Services.

The Osbourne Association envisions Fulton as a stopover for ex-inmates who need help returning to the daily routine. They will be provided with a place to sleep, counseling, medical treatment and dental visits all in one place. And Gaynes wants to make sure the community is benefiting as well: Local entrepreneurs will be able to take part in a business incubator program at Fulton as long as they promise to hire former inmates once they are up and running.

Before being operated as a prison for 36 years, the building that housed Fulton Correctional at 1511 Fulton Ave., served as an Episcopal Church in 1906, a Jewish Center and Synagogue in 1924 and a nursing home and drug treatment center in the 1950s.

The Osbourne Association, which was founded in 1933 and provides services to over 8,000 people each year, had run programs with inmates at Fulton while it was a correctional facility. Nevertheless, the organization realizes that transforming Fulton would be a massive undertaking that will take years to execute.

Of the two efforts, the plan to transform Fulton is the furthest along, with Gaynes having reached out to local elected officials to get their support, including Bronx Sen. Gustavo Rivera, who inherited the prison as part of the state’s redistricting process.

Gaynes’ plan made sense to Rivera.  “She had a vision of repurposing Fulton for reentry programs, housing, job training, just this organic one-stop shop,” Rivera said. “So many inmates come back to the Bronx and without programs like the ones Osbourne offer they wouldn’t have the skills they need to get back into society.”

Rivera said he contacted the Cuomo administration and discussions began on how to make Gaynes’ vision a reality.

One of the project’s biggest boosters is Bronx Borough President Ruben Diaz Jr.

“I was excited when I heard about the proposal,” Diaz said. “I thought this is the perfect opportunity.”

Diaz said he knew that the state could have tried to sell the property to a housing developer rather than gift it to Osbourne.

“I didn’t want the state to auction it off or sell it to some developer," Diaz said. "We are turning this building into a symbol of renewal and perseverance just like the Bronx."

Gaynes said she argued the state would save more money by preventing recidivism over the long term rather than through a one-time infusion from selling the property. The organization says it is committed to spending $6 million on refurbishing Fulton, but that the overall cost is unclear.

Some of that money could come from the state. Cuomo set up a $50 million fund for areas where prisons were closed. Osbourne could tap into $6 million of that cash for capital projects. However, the organization will need to fundraise, secure grants and work with the community to develop programming that will be beneficial to the returning inmates and the local economy.

“The reconstruction could take a couple of years,” Gaynes said. “During that time we will work with the community. We’ve begun conversations with community groups, we want to get elected officials involved, businesses and we are hoping we can find an intersection among those groups.”

Gaynes said her hope is that, unlike in other areas where a reentry program would be scorned, the community around Fulton will not be put off because the program is replacing a correctional facility. But with the project just announced it is still unclear if there will be organized resistance to what Osbourne has planned.

“I think there will be an energetic process,” Jacobs said. “I know Osbourne is committed to working with the community and hosting programs. I think those types of things are always challenging to pull off.”

She said money may be the greatest challenge. “For all the talk about reentry over the past 12 years or so, there has not been much money that goes into it,” she said.