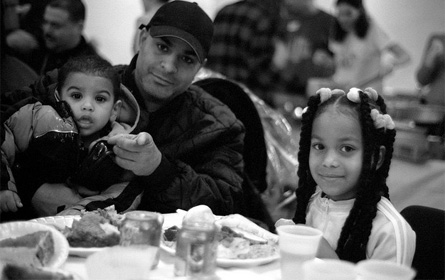 Photo by Jeff Berman
The number of poor families in New York has hardly declined at all since 2006, despite Mayor Michael Bloomberg's antipoverty program.

Five years after Mayor Michael Bloomberg named a blue-ribbon commission to "analyze the causes, scope and consequences of poverty" and created a city Center for Economic Opportunity to turn the commission's "recommendations into policy and practice," it is hard to find any changes in city policy, practice or theory to ameliorate city poverty.

The city's poverty level remains where it was five years ago; the center's 40-plus pilot programs have served only a few thousand New Yorkers; and the mayor himself is on a 10th round of cutting traditional anti-poverty programs: daycare, libraries, senior and youth programs, education, among others.

Despite minimal local impact, the center has just received a federal grant to replicate some of its New York programs in other neighborhoods in the five boroughs and in cities across the country. There is, it seems, a fundamental disconnect between the poverty commission's goal and what it has actually done to change anti-poverty policy and practice in the city.

One reason for the disconnect may simply be that, even though the center is in the mayor's office, it is not so much a public program to fight poverty in New York City as a privately funded, privately run policy shop with a national focus. The center's work on broadening the federal definition of poverty is one example. .

The federal grant --a $5.7 million Social Innovation Fund award from the federal Corporation for National and Community Service -- is another indication of Bloomberg's national focus. The grant will provide money to expand a few of the center’s pilot programs to "combat poverty across a diverse cross-section of America." .

But the structure and administration of the mayor's overall anti-poverty reform plan -- revealed in rare detail in his federal grant application -- best explains the disconnect. It shows how the mayor uses private funding, national nonprofit research/policy organizations and nonprofit service providers to design, implement, administrate, and evaluate “public policy.” This has, in essence, created a private, parallel universe. .

This pattern, which the New York Post recently characterized as a "shadow government" provides additional funding or some programs but also shields mayoral projects from the public scrutiny they would receive if funded entirely by taxpayer dollars. .

The federal review of the grant proposal cites some of the other problems with that parallel universe. Two expert review panels, for example, viewed some parts of the poverty proposal with much skepticism. They liked the private funds raised by the center -- the bulk of it from the Mayor’s Fund to Advance New York City and the mayor’s own charitable foundation -- but questioned several aspects of the proposal: its coherence, its cost-effectiveness, its lack of theory and its weak link to city government itself, among others. Nonetheless, a final review panel approved the application with enthusiasm.

The mayor's anti-poverty effort has three partners. Together they spent $58 million over the four years on earlier stages of the anti-poverty pilot programs. .

The five-year plan included in the federal proposal (the grant is for the first year only) anticipates total funding by the three organizations of $74.3 million, to serve 17,800 people across the nation. The Bloomberg Family Foundation will contribute $25 million over the five years, the Open Society Institute, $2 million. The balance will apparently come from extended federal funding, other private sources, and in-kind contributions by city agencies and nonprofit organizations. .

The first year budget of $12.6 million ($5.7 million from the federal grant and the balance from the Mayor’s Fund) includes $4.57 million to MDRC for selecting sub-grantees, evaluations and fiscal monitoring. One review panel called this share "too significant an investment for year one, even with a gold-plated partner like MDRC." .

The $74.3 million program has five parts and builds upon programs developed by the three partners since 2006. It will replicate the city's pilot programs in New York and seven other cities. The best known of these is Family Rewards, a new version of the controversial three-year "conditional cash transfer" program begun in 2007. .

The original program gave low-income people cash rewards if they did various things, such as making sure their children attended school or keeping doctor appointments. The average family payment was $3,000 per year for the first two years. .

MDRC did a preliminary study in 2010 that gave it a mixed review. Its follow-up study of program participants will continue until 2012, two years after the program’s demise. .

Under the new federally supported plan, the Mayor's Fund and the center have awarded Seedco, a national nonprofit organization which was a partner in the original effort, a three-year $694,000 contract to implement the new Family Rewards program in the Bronx and Memphis, Tenn. Seedco, working with six city community-based organization, including BronxWorks and the Children's Aid Society in the Bronx, will choose 600 families in each city to be part of the program. .

MDRC will do a full scale "randomized control trial" of the program's "streamlined incentives," studying an additional 600 families in each city who do not participate in the program. .

The other components of the proposal are:

The Mayor's Fund/Center proposal went through a two-phase review process. In the first phase, one panel rated the application "Satisfactory," the third highest of four options, and the second assessed it as "Strong," the second highest rating. A second-phase review panel gave it the highest score, "Excellent." .

The first panel found that the program design lacked "cohesiveness and clarity around a theory of change." Overall, the panel did not feel confident that the grand scale of the program, more than $100 million over five years, would lead to "outcomes that were demonstrable or cost-effective." .

The second panel, although generally quite supportive, questioned the role of MDRC. It expressed concern that the MDRC would both be providing technical assistance and then, in effect, evaluating the success of its own program. .

The second-phase review panel, on the other hand, was very enthusiastic about the application. And for them, MDRC was the strength of the proposal. Noting MDRC had partnered with the applicant on past programs, the panel said, "The established partnership with the MDRC brings both the evaluative capacity [and] program-specific experience that would lead to a successful program."

One thing missing in the review panels' work is any mention of the fact that during the several years of the pilot programs, the city poverty rate showed no statistically significant change. According to the center's own research office, using the official federal definition of poverty, which defines a family of three with income less than $22,000 as being below the poverty line, the poverty rate in New York City was 17.9 percent in 2006 and 17.3 percent in 2009. Using the center's broader definition, the poverty rate remained unchanged at 19.9 percent over that period. A third estimate, from the private Fiscal Policy Institute says the poverty rate in 2009 was 21.3 percent, or 1.8 million New Yorkers, with half of them in deep poverty -- meaning their income was less than 50 percent of the poverty line.

Aside from a few pilot programs, they city has had little to no response to the high poverty level in recent years. On the tax side, the mayor's raising of the city sales tax in August 2009, from 4.0 to 4.5 percent -- a historic high for the regressive tax -- only added another burden for low-income households. On the expense side, the Mayor's Management Reports and the Independent Budget Office's March analysis of Bloomberg's preliminary budget show the city helping residents access federal anti-hunger money, but cutting back on well-established anti-poverty programs.

Spending for children's daycare and preventative services for children at risk of neglect or abuse, both programs largely used by families living in poverty, have plunged in the past five years. For example, the number of children receiving contracted preventive services declined by over 13 percent from 2006 the first four months of fiscal 2011.

According to the Independent Budget Office, childcare enrollment dropped 12 percent, from 116,000 in 2006 to 102,000 in 2010. While the mayor recently said he would not eliminate thousands of additional daycare slots, many advocates dispute this. Bloomberg also has proposed increases in fees parents must pay for contracted childcare, starting in fiscal 2012.

Cutbacks in Youth and Public Education

One city youth program, the Summer Youth Employment Program, has shrunk over the past two years. The Independent Budget Office pointed out in March the program served more than 52,000 youth in 2009, but only 35,612 youth (out of more than 140,000 applications received) in the summer of 2010.

The proposed enrollment for summer 2011 is 17,200 â€“ a 67 percent cut in two years. Much of the cut stems from anticipated state and federal cutbacks, but the mayor himself reduced city funding by $3.2 million, or 9 percent, from 2010. The city isseeking private money to pick up some of the slack.

The fiscal and program disconnect between the Mayor's Fund/Center research/demonstration project and the city’s everyday policies is clearest, however, in public education. As the Independent Budget Office notes, for “the second year in a row the Bloomberg administration has presented a budget that would decrease the number of teachers and classes (thereby increasing class size) and cut other school services.

The federal grant to the Mayor’s Fund and the Center for Economic Opportunity raises more questions than answers about city anti-poverty policy. This 10-year (2006-2016) mayoral experiment in national urban anti-poverty policy -- targeting fewer than 18,000 individuals â€“ may be "scattershot" or it may be "extensive and rigorous," but so far it has had little or no effect on poverty in New York.

Designed and controlled mostly by a national nonprofit organization, funded mostly by private philanthropy, implemented by national and local nonprofits, the demonstration will continue essentially independent of city public agencies. In fact, Bloomberg sees these partnerships and programs being institutionalized in each city. He envisions a kind of long shadow government so that "a change in government leadership would not disrupt the dialogue and joint efforts."

The larger question is whether the apparently exclusive focus in the mayor’s office on the privatization of policy reforms ultimately translates into effective public policy.

(Correction: The April Public Finance column incorrectly reported property tax assessment increases for one, two and three-family houses are "phased in over five years, but with limits on total increases." Rather, increases are recorded each year, to a limit of 6 percent each year, and a five-year limit of 20 percent. The article has been corrected.)