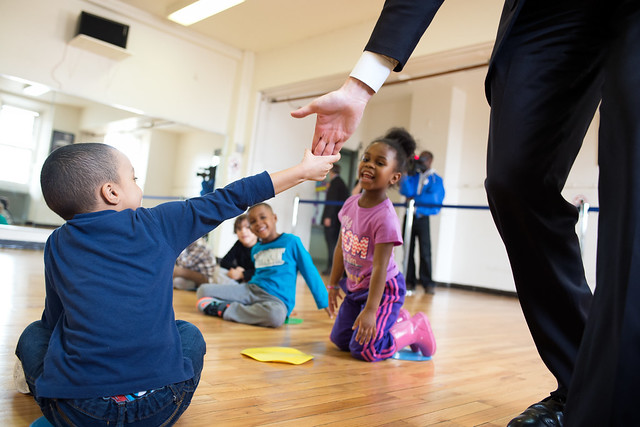 Last week, Mayor Bill de Blasio’s School Diversity Advisory Group (SDAG), on which we served, released its second report calling for all students to have access to enrichment opportunities as a forward-looking replacement for the city’s antiquated system of “gifted and talented” education programs. This provoked a significant volume of responses from a variety of stakeholders who have come to see G&T programs as legitimate and needed. But it is essential that anyone considering what the SDAG is recommending have the full picture -- of both the group’s recommendations and the research they are based upon -- before judging the conclusion.

As SDAG and other critics have noted, the separate and unequal G&T programs are problematic on several levels, in large part because most of them admit students based on an arbitrary cut-off score on one standardized test. In addition, they are disproportionately located in affluent areas of the city and relatedly, serve a disproportionate number of white and Asian students.

This racially and ethnically segregated G&T system reflects the biases that work against the broader understandings of intelligence, ability, and giftedness that sustain our culturally diverse city and our creative and entrepreneurial economy. Research on child development, learning, and culture tell us this is the wrong way to organize schools and label children.

As members of SDAG, New York City public school parents, a researcher (Amy), and a Community Education Council President for District 16 (NeQuan), we argue that New York should lead the national movement to shun so-called gifted education programs in favor of universal enrichment programs that allow all our children to reach their highest potential.

It is important to note that SDAG’s recommendation is holistic -- not simply to throw away G&T and leave everything else as-is -- and grounded in a vast body of evidence about the appropriate uses of standardized tests and programs that separate those labeled “gifted” based on test scores alone.

For instance, the American Educational Research Association, the American Psychological Association, and the National Council on Measurement in Education released a joint statement on the uses of standardized testing in education, proclaiming that, “Decisions that affect individual students' life chances or educational opportunities should not be made on the basis of test scores alone.”

This joint statement issued by three of the most prominent research associations in the field of education sums up the research evidence on standardized tests and their appropriate uses. It echoes the frustration of millions of parents in New York City and elsewhere who know that their children’s intelligence and ability, their gifts and their promises, cannot be measured by one test taken at the age of four.

The inaccuracy of one standardized test to measure individual “giftedness“ is reflected in the stark racial disparities in enrollment in New York City’s G&T programs, which are less than 25 percent black and Latinx in a school system that is 75 percent black and Latinx. These demographics are testimony to not only the racial disparities in income, parental education levels, and access to educational resources. They also reflect the cultural biases inherent in standardized tests that only accept one right answer to questions that could be open to different interpretations when examined through different cultural lenses.

We know, for instance, that the research on how people learn concludes that intelligence is shaped by culture and experience, and that the best test-takers have had life experiences most culturally aligned with the test-makers. A cultural lens through which tests are written and perceived suggests that rather than measure a pure or objective form of “intelligence,” they measure a culturally-shaped understanding of who has knowledge that is aligned with those who wrote the exams.

A 2018 report by the National Academies of Science, Engineering and Medicine concluded that the cultural contexts in which students grow up affect their ability to answer test questions.  When these tests have dire consequences for students’ access to educational programs, they can also have a deep and negative psychological impact on students’ sense of themselves.

Even researchers and educators who once advocated for separate G&T programs for those students with good test scores have changed their minds, calling on more parents to “rethink” gifted education and consider whether these narrowly defined programs even make sense. In research that The Public Good Project has conducted in New York City on racially diverse schools, we have studied schools that have eliminated their G&T programs, and they are thrilled.

As one teacher noted, echoing all of her colleagues: since the school eliminated the G&T program, there is much more diversity at the classroom level and the parents who choose the school now really value that diversity over a label. She said that when the school had the G&T program, the students were more segregated and isolated. Now, she said, “I have a few students who I think would probably test into talented and gifted but their families don’t even bother, and I think it’s because they know that’s it’s great instruction and it’s a nurturing environment…and it’s a truly diverse school and I know that’s rare in the city.”

But why is it so rare in a city like New York, when these research findings are but one reason why a growing number of educators and parents are rejecting the “gifted” labels for programs and students? Through experiences as parents in New York City public schools we know that G&T programs within a racially and ethnically diverse district like District 3 in Manhattan lead to unacceptable levels of racial and ethnic segregation between and within schools. They also lead to skewed understandings of which schools are “good” even when schools that enroll students with lower test scores have stronger curricula and better teachers.

In the predominantly black and Latinx District 16 in Brooklyn, parents fought to bring G&T programs into their schools. Nevertheless, when a new program was added, it was underfunded and low quality in part because the teachers were not well prepared. Thus, the addition of this G&T program led to more divisiveness within the district as only a small number of students gained the “gifted and talented” label.

This divisiveness occurred even when the program used broader criteria and admitted students for third grade instead of kindergarten, making it less problematic than the majority of G&T programs in the city. While the D16 parents thought they were achieving more equity by gaining a G&T program, they soon realized that adding G&T created a bigger set of equity issues, making many of the district’s constituents eager to pilot the new, SDAG-recommended Enrichment for All program.

For the sake of our children, our city and our racially and culturally diverse nation, we hope that District 16 can provide the model we need for an enrichment program that will lead the way to a more humane system that identifies the multiple gifts and talents of 1.1 million students. It’s time to let go of our 20th century model of educating a small number of students with poorly-defined academic "gifts" and adopt a 21st century model of appreciating the many different gifts within students and the family and community cultures that foster them.

***
Amy Stuart Wells is a Professor of Sociology and Education and the Director of Reimagining Education at Teachers College, Columbia University. NeQuan C. McLean is the President of the District 16 Community Education Council in Brooklyn. They are both members of the Mayor’s School Diversity Advisory Group.