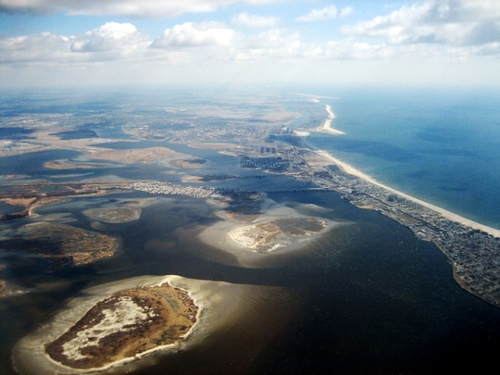 NEW YORK — A plan to construct a new chain of natural gas pipelines from the Atlantic Ocean off the Rockaways through Jamaica Bay to the city is fueling anxiety from residents and some lawmakers because of its complexity and its potential impact on the surrounding community and coastal habitat.

The pipeline project is being championed by the mayor’s office, which says it is critical for meeting the demands of the energy-hungry metropolis, and National Grid, whose customers in Brooklyn and Queens will largely benefit from the increased supply that the project will bring.

Much of the project takes place in the 26,000-acre Gateway National Recreation Area. A new pipeline will extend from an existing gas line two-and-a-half miles off the Rockaway coast and run underneath Jacob Riis Park toward Jamaica Bay. Two pipelines will then run underneath the Bay, connecting to a proposed gas metering station to be housed in a historically significant hangar at Floyd Bennett Field. A separate pipeline will run from the meter station to an existing gas main on Flatbush Avenue in Brooklyn.

In terms of public review, the project has been split in two. Construction of the the coastal pipeline and meter station is being managed by Oklahoma-based Williams Companies. This section of the project is under federal jurisdiction and is subject to a full environmental review and public comment period.

National Grid is managing construction of the pipelines underneath Jamaica Bay, and along Flatbush Avenue. This section of the project is under the city’s jurisdiction. An assessment of potential environmental impacts associated with the project determined that there was no need for a full review. The determination also eliminated the requirement for a public comment period.

Construction on the first of three phases of the project is expected to begin later this year, with a project completion date of 2014.

Some residents have asked why there has not been more public input on key decisions, such as the siting of the 60,000-square-foot gas metering facility at Floyd Bennett Field.

“The public doesn’t have an understanding of what’s involved,” said Karen Orlando, a local resident and former member of the Coalition Against the Rockaway Pipeline. “It’s very hard for regular people to understand the process â€¦ how all the pieces fit together.”

The project requires approval and oversight by various city, state and federal agencies. The National Park Service needed Congressional authorization to permit construction of the meter station at Floyd Bennett Field. Legislation approving construction of the pipeline and related installations within Gateway passed the House earlier this year, and the U.S. Senate in September. 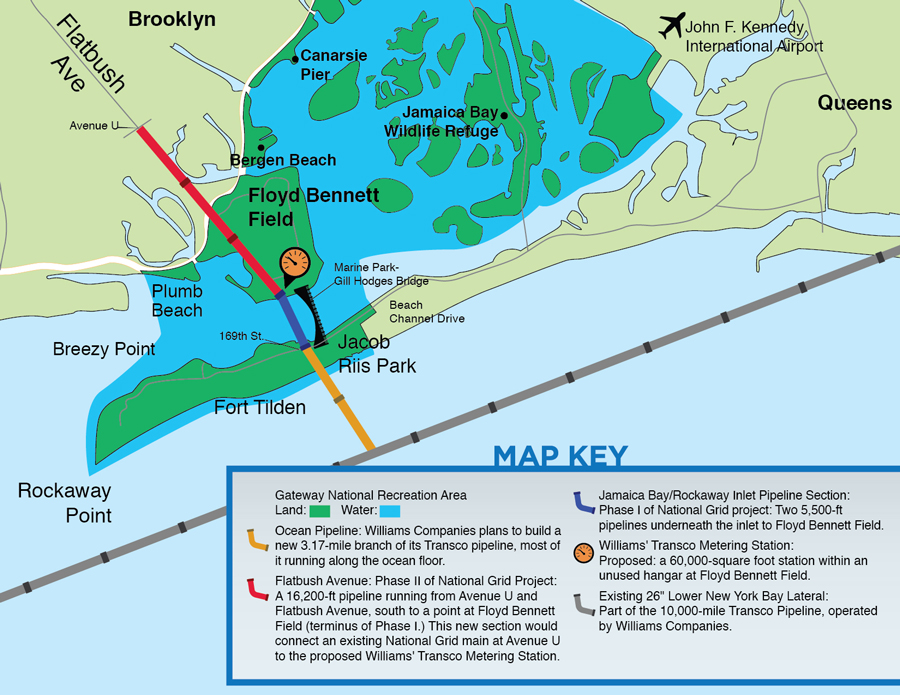 National Grid requested Williams Companies, a major energy infrastructure company, to build the extension of its Transco pipeline off the Atlantic Coast to “meet the expected demand for natural gas in New York City and reinforce its existing system.”

Project documents filed with the Federal Energy Regulatory Commission note that 68 percent of residential households in Brooklyn and Queens used natural gas for space heating in 2008, an increase of over 130,000 households since 2000.

Adding to the demand for natural gas, the city passed regulations that call for replacing the pollution-generating heavy heating oils used in buildings with substantially cleaner fuels by 2030. Policymakers expect that natural gas will be among the most attractive options because of its low cost and decreased emissions.

Young noted that “over the next five years, demand for natural gas in National Grid’s NYC service area is forecasted to increase 15 percent, representing an additional 25,000 residential, commercial, industrial and multifamily customers.”

Deputy Mayor Cas Holloway said in an interview with Gotham Gazette last month that projects like the Rockaway pipelines, and an interstate pipeline that is being built between New Jersey and Manhattan, will ultimately “save lives” because they will help reduce the reliance on dirty-burning heavy oils that contribute disproportionately to air pollution.

He said the projects “are being done with minimal environmental impacts, and they ultimately are going to have a huge public health benefit.”

But others are not so convinced that the project won’t have much impact.

State Sen. Joseph Addabbo of the 15th senate district said there are “a number of environmental issues. I’m very concerned at this point. My people are scared.”

City Councilman Eric Ulrich, who is challenging Addabbo for his Senate seat, said that National Grid “has a lot of convincing to do,” adding that he didn’t "see how having National Grid tunneling under Jamaica Bay is going to do us any good.”

Local environmentalists argue that the project could devastate a critical habitat off the coast of the Rockaways, where striped bass, blue fish, lobsters, spider crabs and other marine life can regularly be found.

And the city says the Jamaica Bay area is an “integral part of the larger, regional ecosystem” and that it hosts over 325 species of birds and 50 species of butterflies. It is also a favorite stop for migratory waterfowl. The 18,000-acre wetland estuary is described as the “jewel in the crown” of the national and city park systems.

“There is a big environmental footprint out here and the regulatory agencies need to take a hard look at it,” said Dan Mundy, vice-president of Jamaica Bay EcoWatchers.

Williams Companies’ proposed coastal pipeline running underneath Jacob Riis Park toward Jamaica Bay will connect with an interstate gas pipeline operated by the company — the 10,000-mile Transco Natural Gas Pipeline, which runs from South Texas to New York City. According to Williams spokesman Chris Stockton, the Transco Pipeline currently supplies half of the natural gas consumed in New York City.

Stockton explained that Transco delivers gas from a variety of locations, including Canada, Shale areas in Pennsylvania, Arkansas, and overseas.

Construction of the 2.79-mile long, 26-inch off-shore pipeline section will require the use of high pressure water jets to dig a trench three feet below the ocean floor. According to documents released last month by Williams, the trench could impact an area 60-feet wide.

Mundy said the location of the trench was moved so that it would avoid striking a nearby artificial reef. But he questioned whether the disrupted sediment and sand from the jet blasting will impact the “thousands of fish” that now live on the reef. He said, “That reef is an economic boom to this area â€¦ the life that is supported by this thing is amazing.”

Mundy’s group is also concerned about the point at which the pipeline heads deeper below the surface, about a hundred feet offshore, in order to run under Jacob Riis Park.

According to Williams, drilling will begin at this point and the company will dig a sub-sea containment pit in order “to contain the clay-based drilling fluid and borehole cuttings.”

Williams notes in its proposal that “inadvertent” but “visible” leaks of drilling fluid could occur offshore, but that the fluid consists mainly of fresh water and bentonite, a “non-hazardous” clay mineral.

Dan Mundy questions whether leaks of the drilling fluid could also pose a threat to marine life, and how this will be addressed.

Williams' project proposal explains that “drilling activities would not be suspended unless the volume of inadvertent drilling fluid returns creates a threat to public health and safety.”

Stockton pointed out that the company expected impacts from the drilling to be temporary.

He added, “we are working with the state Department of Environmental Conservation and the Army Corps of Engineers to determine if mitigation will be necessary. It’s not just us going out there and deciding where to put this in a vacuum. The regulatory bodies are going to be looking at our plan, helping us to avoid these impacts to the fullest extent. (It’s) all part of the process.”

Williams also plans to construct a one-acre gas metering station in an unused historic hangar at Floyd Bennett Field. Stockton explained that the station would be “bigger than your typical facility because of heaters and regulators.”

The proposed meter station has attracted attention from groups like CARP because they say there were no public discussions regarding the possible use of the hangar, and because the hangar is public property and is managed by the National Park Service.

CARP described the recent passage of federal legislation by the Senate permitting pipeline infrastructure within Floyd Bennett Field as an “outrage.” The group said in a statement to Gotham Gazette that the former airport and park is home to heavily used recreation facilities and “one of New York State’s oldest and largest community gardens.”

They added that the legislation “alters a 1972 law that has long protected the federal park from any uses other than recreation or conservation.”

Stockton noted that finding a viable location for a meter station in a densely populated urban area has been difficult, and that the company has attempted to respond to community concerns.

Williams released a new series of draft project documents in September, and submits a final application to FERC this fall. FERC held an environmental impact public scoping session on the project in June. The public will be able to submit comments regarding a draft Environmental Impact Statement to be released by FERC sometime next year.

Since National Grid does not fall under FERC jurisdiction, the utility’s half of the Rockaway project was reviewed by the city.

The Mayor’s Office of Environmental Coordination determined that there were “no potentially significant effects on the quality of the environment” and issued a “Negative Declaration” for the National Grid project on December 2nd, 2011. A “Negative Declaration” eliminates the requirement for a more comprehensive and public environmental impact review. The city issued its decision after a review of an environmental assessment statement, which was prepared for National Grid by AKRF, a consulting firm.

Referring to the construction of the two pipelines in the Bay’s Rockaway Inlet, the EAS found that due to the depths of the drilling being proposed “there would be no significant adverse impacts to aquatic habitat or aquatic organisms, including transient marine turtles or northern diamondback terrapins. The pipelines would be installed well below the design dredge depth and the existing depth of the sea bed.” Rockaway Inlet is approximately two miles from the inner portions of the Bay, including its Wildlife Refuge.

As the review process for the Rockaway project moves forward, more of the public is weighing in. Orlando and other residents note that because the project occurs mainly on public land, identifying all the stakeholders has been difficult.

“Who gets input on the legislation? Who gets input on Floyd Bennett Field? Yes, the public can participate in the FERC process but as the process moves along, (there is) an enormous amount of paperwork,” Orlando said.

In terms of how residents first understood the possible risks of a new high pressure gas pipeline, Community Board 14 District Manager Jonathan Gaska says, “There was a level of trust that if it’s going to get state and federal approval — that it was going to be safe. That was a feeling of a lot of people. Even if the city screwed up, you still have the state. And if they screwed up, you still have the feds â€¦. If this had run through neighborhoods there would have been a lot more scrutiny.”