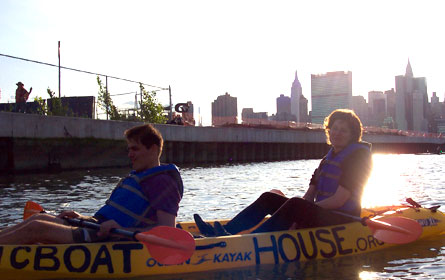 These were rough waters.

A group of 15 New Yorkers, including this reporter, set out on the East River Friday evening for a taste of the city’s sea salt. Two to a kayak, they trolled our marine superhighway, from the shores of Long Island City to the meandering, if slightly noxious, Newtown Creek, weaving between the city’s water taxis and bobbing in their wakes.

An activity once reserved for long weekends in the Catskills is now embarked upon here in the five boroughs â€“- life jackets included -â€“ thanks to groups of aqua-friendly volunteers.

“I’m sorry I didn’t start coming out sooner,” said Ted Gruber, the de facto captain of one such group: the Long Island City Community Boathouse, which runs free kayaking programs every weekend. Gruber, a Greenpoint resident, has been paddling throughout the city’s tributaries and rivers for three years.

“Twenty years ago,” he added while pedaling his blue, foot-powered kayak in Newtown Creek, “it was unthinkable.”

Communities Drowned Out
As planners and developers eye the water's edge, are grassroots and community advocates losing their say?

A lot of New Yorkers and many of you who responded to Gotham Gazette and Huffington Post’s inquiry on waterfront access say they also get their waterfront fix via vessel -- kayaking in Long Island City's Hallets Cove or paddle-boating under the Brooklyn Bridge.

Still, no one is ready to call the East River the new Grand Canal.

The Bloomberg administration’s pursuit of development along the city’s shorelines has brought a renewed focus to the waterfront. From preserving the working waterfront of Sunset Park to the construction of waterside parks in western Queens, points of access to the city’s 578 miles of water’s edge are popping up across the five boroughs. Though it may still be a long way from bringing the waterfront to every New Yorker, advocates say the city is no longer swimming upstream.

To tell us about your own waterfront activities or complaints, check out this map here.

Dipping a Toe In

Megan Browne, who lives in Dumbo at the mouth of the Brooklyn Bridge, takes her 5-year-old twins down to the water almost every day.

Browne, a 43-year-old California native who spent 16 years living abroad in Europe, said living by the waterfront is ideal -- even if New York’s waterfront recreational opportunities pale in comparison to other locations.

"In most European cities, I think they take much better advantage of the waterfront than New York does," said Browne. "It's always been a mystery to us."

But just 10 years ago, according to city officials and advocates, it was far worse. Up until the late 1980s, according to Department of Environmental Protection Deputy Commissioner for Wastewater Treatment Vincent Sapienza, more than 200 million gallons of sewage were discharged into the city's waterways every day -- a major impediment to waterfront recreation and development.

With the addition of new sewage treatment plants, Sapienza said the city is now capturing almost all of the city's wastewater during dry weather (during storms, it’s another story). The progress has allowed the state to designate almost all of the city’s waterways, including the East River, as boat and recreation friendly. The lower New York Bay, which includes the beaches of Staten Island and Coney Island, as well as parts of the Hudson River, from the Bronx to Westchester County, are deemed swimmable by the State Department of Environmental Conservation.

And as the water gets cleaner, more people are likely to jump in -- or at least paddle through, say advocates. President of the Metropolitan Waterfront Alliance Roland Lewis points out that a decade ago there were only two paddling organizations in the metropolitan area. Now there are 22, one of them being Gruber’s Long Island City-based kayakers.

As the East River lapped against the side of their yellow boats and salty water dripped from the tops of their paddles, the kayakers floated near Roosevelt Island, many wet from the waist down. Leslie McBeth, a Greenpoint resident that was joining for the first time, noted that the city’s newfound waterfront focus is even more evident from the water level. A shoreline once covered only with warehouses facing inland now has piers and large condominiums looking out on the water.

“It was kind of fun to see the city from a different perspective,” said McBeth. “There is so much water in New Yorkâ€¦ now people are facing it.”

The city, advocates say, is doing its part to encourage that. Last spring, the parks department launched the city’s first water trail â€“- a pathway made especially for kayaks, canoes and other marine recreation â€“ connecting more than 160 miles of tributaries, creeks, rivers and bays.

Also within the past year, the City Council passed legislation requiring the city draft a waterfront plan every decade (the first is due out in December 2010); the city Planning Department revised its waterfront zoning rules, which it says will encourage more waterfront development and access; and the Bloomberg administration announced the expansion of ferry and water taxi terminals.

Much of this attention may be due to massive luxury residential development along the water. But whatever the impetus, advocates are cheering.

"I give them a very solid thumbs up on turning the corner," said Lewis. But, he added, "there is a long, long way to go."

Finding Your Way to the Edge

Gruber pedaled his way along Newtown Creek â€“- one of the city’s most polluted waterways â€“- as a putrid stench wafted overhead and beer cans floated by.

Lucky for this group, the rain had held off for a couple days. It could have been a much smellier story.

Thanks to the city’s combined sewer system, more than a tenth of an inch of rain can send millions of gallons of raw sewage spilling into our waterways. To avoid this, Sapienza said, the city is implementing a wide range of green (and clean) technologies, like porous pavement and green roofs that would trap the city’s stormwater or divert it from the system entirely. Two retention basins are already in use, holding millions of gallons of stormwater until it can gradually be released into the treatment system. Two more, one in Queens the other in Brooklyn, are scheduled to be in use next year.

The Department of Environmental Protection also sends boats out weekly during the warmer, recreation-friendly months to test contaminants in the water. (The boats go out monthly during the winter.) But unlike the city’s beaches, which have the health department sampling and notifying swimmers of water quality conditions , the city’s rivers and tributaries have no public notification system, and the health department does not sample them.

These conditions, says Lewis, prevent New Yorkers from utilizing the city’s waterways to their full potential.

“The limiting factor for a lot of recreation and enjoyment of the waterfront is the CSO [combined sewer overflow] issue,” said Lewis. “In this summer of rain it’s been particularly awful.”

Additionally, Lewis said, the less affluent areas of the five boroughs have a waterfront access drought. As an example, he noted that from Riverdale to the Bronx River, there is no launching point for the public to get onto the water.

Advocates want that to change. The more people use the waterway, said Lewis, the more the city will be required to accommodate them.

Back on the East River, the kayakers’ volunteer leader for the evening, Monica Schroeder, radioed to local marine traffic that the group would be paddling across the marine channel. A tugboat called back: “I’m eating kayakers tonight for dinner.”

Undeterred, the kayakers paddled on, claiming the East River for themselves.