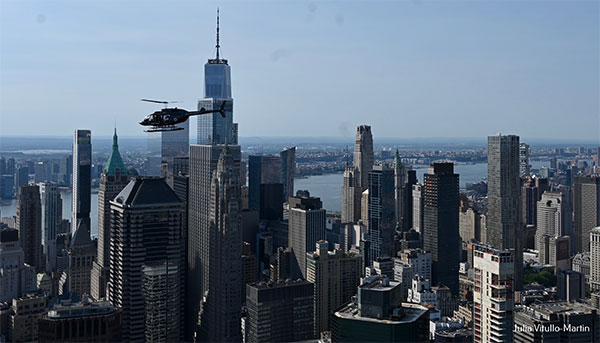 Like many of my neighbors on the Upper West Side I profoundly dislike and resent the tour helicopters that seem to unceasingly harass us on beautiful days, lining up equidistantly over the Hudson as if they were jets ready to land at JFK. Only they don’t land. They tremble and hover and circle stridently.

Still, I recognize that there are those who love them because the tour helis fly constantly and, apparently, full.

I decided to see for myself.

I booked directly with FlyNYON, which seems to have a semi-permanent 60% off & more sale. This means that basically you pay $350 per person, give or take a few dollars, for a 30-minute doors-off flight. You have to make your way to Kearny, New Jersey, which sits beneath the dazzling Pulaski Skyway. FlyNYON’s headquarters, housed in a handsomely converted warehouse, is landscaped and welcoming. Check-in is friendly and courteous, the video informative, and the waiting room pleasant. Likable employees outfit you with a harness that could hold a pony in place, and direct you to a van for a short ride to the helipad.

They really do mean doors off. No door whatsoever I learned, clutching my friend as we took off and trying to remember my high school physics class on centrifugal force. Something about vertical lift and equal and opposite reaction. We flew above industrial New Jersey, Manhattan looking like some fantastic futuristic kingdom in the distance. The pilot banked over the Hudson, tilting my side down almost perpendicular to the river. Awful sensation. No one else on the flight—all Gen Y—was worried in the least.

We cut over to Central Park via the 70s, which was common in pre-pandemic days, less so now. We circled slowly and noisily above Belvedere Lake and the Great Lawn for 8-10 minutes, reversing directions twice so that everyone could get their preferred photo, then turned East towards the river. “God, New York is beautiful,” said a young Serb, who had brought along his national flag, carrying the royal coat of arms that has replaced the Red Star. “Maybe the most beautiful place we’ve been,” murmured his friend, as we passed the towers of East Midtown. As we flew over the Brooklyn Bridge, the Statue of Liberty could be seen, growing larger and ever more thrilling as we approached. The Serb had hoped to photograph Lady Liberty beyond his proudly held Serbian flag, which wasn’t allowed.

I was the only one on the way home interested in photographing Port Newark-Elizabeth, which, with its immense container operation, had replaced Brooklyn, now a tiny remnant of its World War II glory.

For purposes of balance I also took a tour with Helicopter Flight Services, flying from the Downtown Heliport, a somewhat forlorn-looking facility that once booked 60,000 flights yearly. To fill out the flight’s 30 minutes we headed to the Verrazzano Bridge, skirting the Statue of Liberty, then flying over a pretty empty New York Bay. We returned, and flew up the Hudson, never crossing land as was agreed in 2016 when heli companies based at the Downtown Heliport contracted to reduce the number of flights by 50%, not fly over Governors Island, and turn around before the George Washington Bridge.

Our Heli Flight pilot never hovered. He was well aware of the landmarks, which he identified accurately, including the newly-opened Little Island, which he simply praised and moved on.

What I Learned in NJ: Complaints Matter
The most important lesson for those troubled about New York’s helicopter invasion is: Complaints make a difference, so keep up the protests. I asked our FlyNYON pilot why we did not pass the Empire State Building, as promised in the brochure. “The boss made a deal with the Eastern Region Helicopter Council to stay away from the Empire and the Chrysler,” he said. “Also the World Trade Center. Too many complaints.” This was confirmed by Jeffery Smith, ERHC’s vice president for operations and governmental affairs.

The redirection of routes away from Midtown and Chelsea is good news for those who had been under the old flight paths that had come close to clipping celebrated towers, but bad news for those suffering under the new flight paths—especially Central Park, which really does seem like Apocalypse Now on weekend days, as well as New York Harbor, the Brooklyn waterfront, and Governors Island. All of this is likely to get worse in the coming months.

Know Your Bad Guys
As we waited I spotted Bell helicopter N216MH parked on the tarmac beneath the Pulaski Skyway. That helicopter has often been castigated on social media as an especially bad (even “criminal”) FlyNYON tour heli. It is indeed a tour helicopter, but not for FlyNYON. Its customers were dropped off in a colorful van emblazoned “MiamiHelicopter.com” along with a non-working phone number. Our pilot said the real operator was newyorkhelicoptertours.com.

Many of the helicopters flying low and aggressively over New York are without callsigns or any identifiable registration. Some are Wings Air, flying out of Westchester; some are news helis, especially Channels 7, 8, and 11; and some are random private owners from neighboring states deciding to joyride around Manhattan. A Robinson 44 with a blocked registration from deep in New Jersey regularly circles and hovers at low altitudes late at night. No one can identify him and the FAA doesn’t care.

The point is that the FAA lets anyone—absolutely anyone—fly over New York, which has had more than its share of terrorist bombings over the years. To the FAA the skies are just a highway—skyway is the FAA term—that should be open to all, just as highways are open to all. In an attempt to understand and control the air traffic, Mayor Giuliani had mandated that all helicopters be marked with identification that could be clearly seen, much like MTA buses and NYPD patrol cars. Then-district court judge Sonia Sotomayor blocked him, enjoining the city from imposing any regulations.

What has helped us is not the federal government at all but private sector flight apps like FlightRadar and FlightAware that allow citizens to identify most of the offending helicopters. Some helicopters, however, such as the R44 cited above, turn off transponders and block all identifying data. This should not be allowed, but is, under the FAA’s free-for-all transpo policies. This is a matter of which the ERHC and industry groups could be productive, encouraging their members to identify themselves—and behave properly.

Save Our Parks!
To the FAA, our magnificent New York City parks are runways—open space with few or no buildings that are easily crossed at low altitudes by planes and helicopters. The FAA actually names its designated skyways after parks, the most notorious being “the Central Park route.” Jeff Smith points out that “the Central Park route letter of agreement with the LaGuardia tower is that we fly at 1,500 feet. Period.” That’s much too low, of course, for those below trying to enjoy a peaceful outing. The huge commuting Sikorskys that thunder through the park are especially destructive and, more often than not, fly well below 1,500 feet. Mayor Giuliani’s attempt to ban Sikorskys was also blocked by Judge Sotomayor.

Former New York City Parks Commissioner Adrian Benepe, now President and CEO of the Brooklyn Botanic Garden, says, “With its route from the Hamptons the FAA is managing to kill some six parks across Brooklyn, starting with Floyd Bennett, then Marine Park, Greenwood Cemetery, Prospect Park, us, and Brooklyn Bridge Park.” Prospect Park is actually in the middle of what the FAA calls “the park route.” Brooklyn Community Board 6's district manager told Gothamist in 2014, “The air traffic over Prospect Park is in the approach to runway 3-1 at LaGuardia Airport and by the time they get to us the planes are around 1,000-3,000 feet overhead, which is quite low and loud. Prospect Park is an emergency landing zone, which is partly why they use the trajectory which brings them over our neighborhood.” This is still true. Says Benepe: “The places we go to get away from noise are exactly the places the FAA sends helicopters and planes over to make noise.”

Even as we spoke, Benepe’s voice was muted by the helicopters circling above the Botanic Garden, which planned to hold “An Evening of Remembrance and Reflection” that night. Benepe was worried that the audience would have trouble hearing the performance of Breathe, a work for an ensemble of 20 brass and percussion musicians. Multiple news helis plus one NYPD helicopter had been circling over nearby Barclays Center, which was hosting a protest on the anniversary of George Floyd’s death.

Why do we need news helis? he asks. Good question. In the old days news helicopters were useful for traffic, alerting drivers to accidents and blockages. But no more. Now we use phones and apps. But multiple news helis still fly to cover crashes—especially if they’re serious—and protests. And why? Helicopters cost some $200-400 and up per hour to operate and are likely to produce only a few minutes of footage to air. Fuel alone costs a Robinson R44 $113/hour, a Bell205A $380/hour, and a Sikorsky SK92 $755/hour. Why not set up a pool reporting system? This should be on the next mayor’s agenda: negotiate with the news stations for pool reporting.

The Tragedy of the Commons
Many New Yorkers would like the heliports closed. But that’s unlikely to happen, partly because of existing contracts but also because New York is a world city that needs to allow presidents, foreign dignitaries, and generic CEOs to fly in and out easily. We can rail about privileged big shots, but they’re crucial to New York’s economy and image (think Succession). “If the Pope can’t land you’re not a world city,” political consultant Jay Kriegel had said during an earlier push to close the Downtown Heliport.

But we need a return to a 1960s-type discussion of public goods, to resurrect an old Paul Samuelson term. Public goods are available to all and include such things as air, lighthouses, national defense, and public parks. The problem, Samuelson noted, can come with “free riders,” those who exploit, even damage, the public good without paying their fair share or paying anything at all—as in FlyNYON’s flights over Central Park, degrading the park experience for its legitimate users without paying a dime for its upkeep.

Or take the Tragedy of the Commons, in which an individual’s exploitation of a public good results in its depletion, imposing substantial damage on others. Examples include the original overgrazing of common lands in England, as well as over-fishing, over-hunting, or damage to broader goods like climate.

Noise can be corrected in at least two ways. First, helicopters should fly higher, which means the next mayor should be negotiating with ERHC and the FAA to rework FAA standards by which helis fly excessively low over our rivers and somewhat higher—but still too low—over land. Rob Wiesenthal, CEO of Blade Urban Air Mobility, says that his operators avoid flying over New York’s cityscape whenever possible. “And we are 100% supportive of a prohibition of flying over Central Park,” he adds.

A return to the old prohibition of flying across Central Park would be a productive initial step.

Second, noise can be corrected technologically—and will be in the next few years as Electric Vertical Aircraft, which are quiet and emission-free, come on line. Wiesenthal notes that heliports aren’t being built around the country these days because of noise. That will change as the industry changes.

In the meantime, let’s get the tour helicopters that are destroying our commons out of our skies.

Read more by this author.