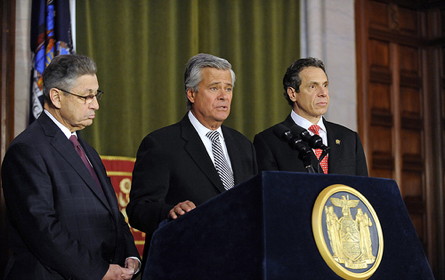 At the top of Gov. Andrew Cuomo’s legislative to-do list this session is a bill designed to reduce the arrests and stigma associated with the city’s stop-and-frisk policies, which would reduce the penalty for carrying a small amount of marijuana.

But with three days left in the legislative session it appears the measure -- and a number of others that reflect issues important to city residents -- will not be addressed.

Unresolved issues include campaign finance reform, a highlight of Cuomo's State of the State address; various rent issues; an increase in the minimum wage; and an agreement on preventing the full public disclosure of teacher evaluations.

Having suffered major criticism for rushing bills through their required aging process with messages of necessity, the governor has told legislators there will be no repeat -- so most of the big deals seems likely to be finished.

Therefore, if Cuomo stays true to his word, any compromise legislation would have had to be introduced by late last night. That hardly seems likely, given that legislators are in a scramble to get back to their districts to start campaigning, as all seats are up for grabs this November.

The Legislature and the Cuomo administration did come to terms on the governor's proposal for a "justice center" that would investigate the abuse of vulnerable populations like the developmentally disabled and elderly.

The Senate Majority passed Cuomo’s proposal almost as quickly as he issued it while the Assembly negotiated for more oversight. The new agreement would create an oversight board and require an annual report on the center’s activity.  Other deals include a bill that would define cyber bullying, make looking at child pornography illegal and create a state thoroughbred racing board.

Tenant advocates had hoped that the expiration of the J-51 tax abatement would set up a scenario where Senate Republicans and real estate interests would be willing to negotiate concessions on pro tenant legislation with the Assembly Democrats in exchange for a renewal of the program. So far a deal seems unlikely.

The Senate passed a straight extender of the J-51 program on the 14th with only one opposing Democratic vote. Tenants groups had advised housing-minded Democrats to vote against the bill. Meanwhile, the administration of Mayor Michael Bloomberg introduced legislation on the 11th that would extend J-51 but with a few tweaks.

A recent report showed that the program has been applied to condominiums and cooperatives; the administration’s bill would limit that and would be retroactive to the program’s expiration at the end of last year. However, the bill is still sitting in the rules committee.

Tenants advocates also want this bill to be voted down because they feel the program was not tweaked enough to focus on its original purpose, which was to fix up low income housing stock. The Assembly introduced its own J-51 legislation over the weekend that would drastically refine the program.

Cuomo highlighted campaign finance reform as a focus of this legislative session earlier in the year, but has since eased back. Many capital observers thought a deal on the politically charged issue would be almost impossible this session while heading into election season. However, Assembly Speaker Sheldon Silver introduced a voluntary campaign finance reform bill earlier this year. Senate Democrats introduced the “same as” legislation, but Cuomo quickly swatted the idea down.

“I normally don’t put out a bill when we can actually get an agreement and pass something,” he said.

For the last three years, Democrats have pushed for microstamping, which allows for "fingerprinting" of bullets to make them easier to link back to the gun that fired them. A number of law enforcement groups support the technology because they say it will make solving gun crimes worlds easier.

The issue is contentious because some studies have found the technology is not reliable. Opponents also argue the price of installing the technology on handguns is prohibitive.

The National Rifle Association and other pro-gun groups have lobbied hard against the legislation. Remmington Arms has threatened to move out of the state if the bill requiring becomes law.

It seemed like an issue that might have some potential heading into an election year, but at the moment a deal on increasing the state’s minimum wage will likely have to wait to an often rumored special session that could take place after the elections.

The Assembly Majority continues to push hard on the issue while Senate Republicans have opposed it.

Senate Majority Leader Dean Skelos has called the proposed increase “regressive,” saying it will hurt jobs. When pressed by reporters last month, Skelos said: “I’m just telling you, we will not pass the Speaker’s bill.” Teacher Evaluations  Unless the Legislature acts this week, teacher evaluations will become public to everyone.

Cuomo favors a plan that would make all the information public except for the teachers' names. However, parents would be able to access the evaluations and names of the teachers of their children's class.

Legislators are opposed to the full release of the evaluations and don't think Cuomo's plan goes far enough to limit access to the information.

By late last night, it was unclear where negotiations stood.

If there is no further negotiation, the Legislature will have to choose between Cuomo's plan and full disclosure of the reports.