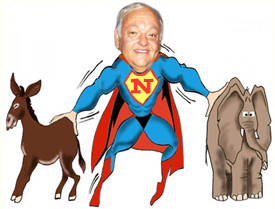 In more than 80 percent of the nation’s largest cities, mayors are elected through nonpartisan elections — elections in which the candidates do not run on the Democratic or Republican or any other established party line, but as individuals. The cities where there are non-partisan elections include Los Angeles, Chicago, Houston, Detroit, Denver, and San Francisco. New York City is the exception.

That is why the new Charter Revision Commission, which Mayor Bloomberg asked me to chair, will be considering this important matter, with the intention of putting it on the ballot for the voters to decide, along with several other issues. (See Blue Box for some of the other issues).

I have been a member of two previous Charter Commissions, and was interested in the work of the last commission, chaired by Robert McGuire, and felt that it was important to build on what they had done. Because of the pressures of time, they had left several important matters on the table, including not whether but when to offer the voters a chance to choose nonpartisan elections on a ballot referendum.

The opportunity for citizens to choose freely and fairly those who represent them is at the core of democracy. Steps toward promoting democracy include encouraging greater participation of voters and a wider range of candidates, increasing the electorate’s knowledge of candidates and issues, and providing resources for those who seek public office. Nonpartisan elections may better complement and support these goals than the current partisan system.

As the Charter Revision Commission considers nonpartisan elections, there are issues both concerning the “why” and the “how.”

Writing on these pages in January, Doug Muzzio cited the learned Yogi Berra: “Before you build a better mousetrap, it helps to know if there are mice out there.” Indeed, there are plenty of mice out there:

â€˘ Voting in local elections is declining. The number of non-enrolled voters is growing rapidly, particularly among youth and recent immigrants.
â€˘ The ballot petition procedures candidates must follow are famously burdensome and knocking opponents off the ballot absurdly common
â€˘ Party bosses still seek to stifle competition and exact patronage
â€˘ Perhaps most significantly, many candidates win their party primary with fewer than a third of the votes, with general elections serving as confirmations rather than contests. What should be a fierce competition is instead a fait accompli.

It is not surprising, given the sum of these variables, that incumbent re-election rates approach 100 percent, as party bosses continue to wield power.

The system is indeed broken. The city’s independent voters, ever-growing in number, are effectively disenfranchised, since the party primary decides all but a few elections. As the noted political scientist V.O. Key wrote about the segregated south, a one party system is the functional equivalent of a no party system.

How would nonpartisan elections work?

Over the next few months, as the Commission studies nonpartisan elections and their potential impact on New York City, our attention will focus on several key areas.

As the commission explores the design of nonpartisan elections, a number of variables will be considered. These include:

As we examine the experience of other cities and consider the lessons they hold for New York, it is important to note several features unique to New York that can serve to enhance the effects of nonpartisan elections. New York is the only city in the nation with term limits, a generous campaign finance program, and a widely distributed Voter Guide. Contributing to civic debate and voter information in New York are the number of competing daily newspapers, weekly papers, cable news stations, ethnic and general radio stations, and powerful unions and other organized groups.

Voter turnout: Some have asserted that nonpartisan elections lead to reduced voter turnout. The research here is scanty, and often fails to compare turnouts in large cities. A further contradiction in opponents’ arguments concerns the assertion that in the absence of party labels voters will not have a cue as to a candidate’s views. Yet in the Democratic primary, where most elections are decided, voters differentiate among candidates without any party label to assist them. They do this by using information gleaned from the Voter Guide, the community newspapers, and the abundance of campaign literature that the campaign finance program funds. In New York City, at least, this argument lacks salience and is demeaning to voters.

Of course, I am aware of the requirement that our proposal will require “preclearance” from the Department of Justice to ensure compliance with the Voting Rights Act. This is a process with which I am familiar, as we went through the same one when the districting plan that the Commission I chaired was submitted and approved following the 1990 census. It is important to remember here that the Voting Rights Act protects the rights of members of the electorate, not candidates or political parties!

At bottom, the issue is whether we continue to allow a small group of party officials to determine both who gets on the ballot and who can vote in the elections that matter or do we expand opportunity and access. This is not a matter of abstract “good government” principle, but rather a response to the increasing numbers of voters who feel left out of the process as it operates today.

In developing its recommendations concerning nonpartisan elections, the commission will review the work of four previous Charter Revision Commissions which have addressed the topic, carry out its own data collection work, and conduct an extensive program of community engagement. Currently, the commission is in the midst of an initial series of public outreach activities, hearings in each of the boroughs and policy forums on selected subjects. (For a schedule of these activities, please see the commission’s web site.)

If as Clemenceau said, war is too important to leave to the generals, then democracy is too precious to leave to the party bosses. The recommendations put forward by the Commission will be on the basis of consulting widely, listening closely, thinking creatively, and proposing carefully. And, then, it will be for the voters to decide. Democracy is for all.