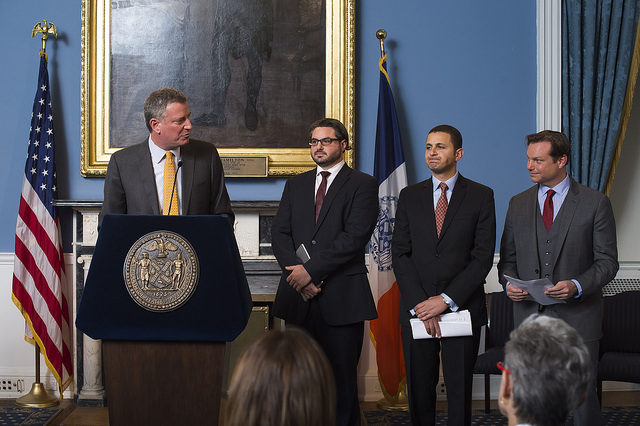 Flanked by his newest staffers at City Hall, de Blasio announced he was naming the six additions as the latest to join his “effective, progressive and diverse” administration. The new mayor emphasized the need to work with both federal and state authorities to come through with his campaign promises on a number of issues, including education, housing and transportation.

“Everyone knows in this room,” de Blasio said,” so much of what we’re trying to achieve involves Albany.”

Hours after de Blasio recommitted to his campaign’s plan to push for universal pre-kindergarten paid for by a tax hike on the city’s wealthiest, Soliman repeated the plan as one of his own top priorities.

Soliman also promised to look into the issue of home rule, which allows municipalities some self-governance of policy in areas typically handled by the state.

“Whether it’s the impact of the state budget on city services or legislation affecting vital programs, the state’s imprint is felt across the city,” Soliman said, adding that the relationship between the city and state should be strong but also allow New York City to make its decisions on issues such as rent laws and speed cameras.

While Soliman tackles Albany, de Blasio picked former Congressional staffer Max Sevilla as his chief of federal legislative affairs. De Blasio joked that the only thing tougher than dealing with Albany is dealing with D.C., which he said was caught in an “extremely complicated” situation.

Taking a page from his predecessor, de Blasio also said that he would continue Bloomberg’s work on Superstorm Sandy recovery and gun control with Sevilla playing a key role on the issues.

De Blasio also appointed longtime ally Peter Ragone as a senior adviser. Ragone, like the mayor, previously worked at the Department of Housing and Urban Development under then-Secretary Andrew Cuomo; he most recently served as press secretary to San Francisco Mayor Gavin Newsom.

De Blasio towered over Mindy Tarlow, who he named as director of operations and will oversee the mayor’s day-to-day performance of the city’s various agencies. Tarlow comes to the administration after heading up the Center for Employment Opportunities.

The administration’s Community Affairs Unit will be headed up by Marco Carrión. A former staffer under Gov. David Paterson and aide to state Sen. Gustavo Rivera, Carrión also served as political director for the Central Labor Council.