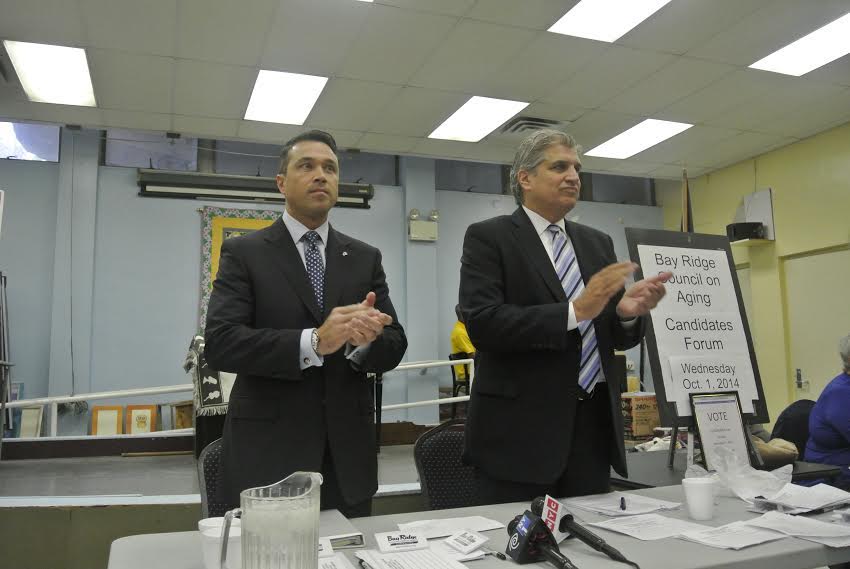 Polls show a neck-and-neck race. Democrats see a flippable House seat held by a Republican who threatened to physically harm a reporter and is facing a 20-count indictment. Their candidate, though, has a limited base in a Republican-heavy district and recently shot himself in the foot by showing startlingly limited command of foreign policy issues.

Grimm's recent indictment on charges such as tax evasion related to a restaurant he once owned seemed to blow open a door already seen as cracked. Recchia, however, has not stormed through it.

Unable to take full advantage of Grimm's weaknesses, Recchia has left room to question if he is the best candidate to be challenging the incumbent and if it was wise for the Democrats to clear the field for him whereby he did not have a primary to better prepare for the general campaign.

While Recchia has a significant fundraising advantage and has been hitting the airwaves with ads attacking Grimm, he has come across as less than articulate on the issues and was conspicuously absent from a previous debate at which Grimm appeared. Grimm used the opportunity to bash Recchia's lack of experience with foreign affairs and lump him together with President Obama and Mayor de Blasio as part of what he called a dangerous progressive movement.

New York Democrats have been quick to defend Recchia and his record while lashing out at Grimm.

"(Recchia) didn't get indicted did he?" said Michael Arvanites, president of the North Shore Democratic Club (of Staten Island). "The most important thing for a Congressman is to not embarrass us, and not threaten anyone physically. He has to focus on getting people back on their feet and not on a trial. If Recchia has to brush up on foreign policy, so be it." He also stressed that Recchia has been particularly effective with one-on-one meetings with voters.

The stress on grassroots has been a cornerstone of Recchia's platform, with frequent mentions of his family and roots in the district. His supporters echo the message. "He's a very down-to-earth guy who says it the way it is and people can relate to him immediately," said City Council Member Vincent Gentile, a Democrat representing southwest Brooklyn, including Bay Ridge, which falls within the 11th Congressional District.

But criticism of the everyman politician has been just as fierce - and not just from Republicans.

"(Dominic Recchia) has become, in all his endeavours, a go-along to get-along politician," said Sal Albanese, a former city council member from Bay Ridge who ran for mayor last year. "That's exactly what we don't need in Washington. He's ill-equipped for the job as he's demonstrated time and again. The only reason he's competitive is because he's raised a lot of money from influence peddlers and he's facing someone who has been indicted."

Calling Recchia a "poster boy of pay-to-play," Albanese said the race would have been an easy win for Democrats had there been a different candidate, especially one from Staten Island such as State Senator Diane Savino, State Assembly Member Michael Cusick, or State Assembly Member Matthew Titone - names floated by multiple sources.

Albanese isn't the only one who has critiqued Recchia's dealing in favors. "If you look at Recchia's record on the Council, he was clearly a wheeler-dealer, playing for his allies and shortchanging others with discretionary funds," said Ted Hamm, chair of the journalism department at St. Joseph's College in Brooklyn.

Emphasizing that Recchia's record needs more scrutiny, Hamm agreed that another candidate would have been better, even suggesting the best man for the job would have been Albanese - who told Gotham Gazette that he was far too tired from his mayoral campaign to turn around and run another race and that he wanted to be Mayor, not a member of Congress.

Neither Albanese nor Hamm advocated anyone vote for Grimm, though.

Hamm did discuss Grimm's path to victory. "I think Grimm's got his base and he's able to play the persecution card that he's being singled out and attacked. He has a reputation for delivering for his district. Given the odds he's facing, he's putting up a much tougher fight," he said.

During a recent appearance on WNYC's The Brian Lehrer Show, Chair of the Democratic Congressional Campaign Committee (DCCC), Rep. Steve Israel said that the indictment might not really affect Grimm, noting, "You know the news of an indicted Congressman, generally people think about that and say 'Well, why is that even news?' When you go to Congress, don't you automatically get indicted. So that didn't really change opinion among voters."

The messaging tack the campaigns take in the coming weeks could be the deciding factor. "Both need to do the same thing, either focus on Grimm's track record or on the vision that Recchia would bring home for the district," said Hamm.

A local Democratic operative who refused to be named said that Recchia's ability to raise money was central to his nomination and that other possible candidates would not have received the same consideration from the Democratic Congressional Campaign Committee. "Recchia's going to deliver the funds for the people he represents," the operative said.

The latest Sienna College poll, released September 16, shows a near dead heat, with Grimm leading 44-40. "Grimm is viewed unfavorably by nearly half of voters, down significantly from November 1, 2012, when he had a 52-34 percent favorability rating," said Steven Greenberg, Siena College pollster. "Recchia is viewed more favorably than unfavorably but he remains unknown to almost half of voters. While more than half of voters say they've seen Grimm commercials or been contacted by his campaign, only a little more than one-third of voters say they've been contacted by the Recchia campaign or have seen his commercials."

On WNYC, Rep. Israel said the he "Always believed it would be a toss-up. When the pundits took this race from safe Republican after the 20-count indictment and trying to throw a reporter off a balcony and said it was a safe Democratic race, I disagreed. This by it's very nature is a toss-up district."

The Siena College poll revealed that both candidates have some home field advantage. Grimm leads in Staten Island while Recchia is more popular on the Brooklyn side of the district.

"Voters are still getting to know Recchia while they have a definitive position on Grimm," said Jonathan Yedin, a political consultant with The Advance Group. "Recchia's just not as known on Staten Island," he added. Yedin was campaign manager for Michael McMahon, who held the seat between 2009 and 2011. McMahon lost to Grimm in 2010.

But that begs the question, why wasn't a Democratic candidate from Staten Island chosen?

"Any one of the other potential candidates could have run, but they didn't. There are pros and cons about everybody, but I think Recchia is in a good place," said Yedin.

Other Democrats weren't interested in discussing possible alternative to Recchia. "There is no one more qualified to serve the people of Brooklyn and Staten Island in Congress than Domenic Recchia," said Justin Brannan, president of the Bay Ridge Democrats. "Dom is an experienced public servant who has spent the last 25 years fighting for the people of this district, from saving the jobs of thousands of teachers from layoffs in 2011 to preventing the closing of dozens of firehouses throughout New York City, including Brooklyn and Staten Island."

Tom Shcherbenko, president of the Staten Island Democratic Association said, "Two years ago when people recommended Domenic, at first I was skeptical. But when I spoke to him I realized he's a smart guy and he can do this. He's so strong from his experience on the City Council. This guy's a fighter." He said Grimm's campaign was not expanding beyond the base which he has already solidified in the last few years. "Grimm needs to find a way to appeal to moderate voters and those who are undecided if he wants to beat Recchia," Shcherbenko said.

Israel said that the more voters in NY-11 learn about the two candidates, "the more they're turning to Domenic Recchia, who was a New York City councilman, just a relentless, tenacious fighter for the middle class. I think that race is going to be litigated...down to Election Day, but we're very optimistic about that based on trends. We've got the momentum in that race now, clearly." 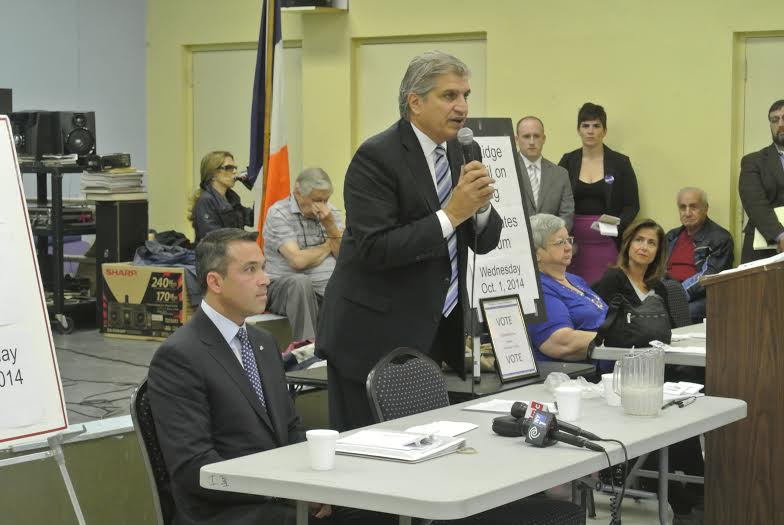 The debate came the week after Recchia was conspicuously absent from another Bay Ridge debate at which Grimm appeared and passionately defended his record and attacked his opponent. Recchia's failure to appear at the debate came on the heels of his committing a series of gaffes on the campaign trail that may have swung some momentum back toward the incumbent and caused the Recchia campaign to regroup privately.

Recchia had shown an apparent inexperience with foreign policy issues on the campaign trail and, citing a scheduling conflict, missed the initial debate where he could have set the record straight. Grimm said his opponent's knowledge of foreign issues was "laughable" and criticized his hesitation to openly debate the issues.

When the two candidates did appear side-by-side, however, Recchia was prepared for the joust in front of a packed ballroom crowd of vocal constituents.

A confident Recchia leaned heavily toward talking up his tenure in the City Council and had his own arrows to sling at Grimm for his votes on sequestration and the government shutdown last year. "I'm running for Congress, ladies and gentleman, because this Congress today is the most ineffective Congress in the history of the United States of America, and it's time that we do something about it," said Recchia. "And my opponent is part of the problem, not part of the solution."

On the offensive, Grimm attacked his opponent as a "toll-raiser" who also raised taxes while on the City Council and critiqued Recchia's positions on immigration and Obamacare. As he has often done, Grimm coupled his remarks with jabs against President Obama, Mayor de Blasio and the progressive agenda. "I think it's a very stark contrast," said Grimm. "Either an ultra-liberal progressive or a like-minded, what I believe I'm like-minded with you, conservative, that believes in a traditional values."

Both candidates made sure to address issues faced by senior citizens, who made up a large portion of the audience, including Social Security and Medicare. Grimm was especially vocal against the Affordable Care Act. "I think Obamacare is one of the biggest problems seniors are facing right now...Our district, the 11th Congressional District is hit 7th out of 435 of the most cuts to medicare. $715 billion dollars was cut from Medicare by Obamacare, something my opponent supports."

Surprisingly, foreign policy was only briefly touched upon, perhaps reflective of the concerns of the audience. 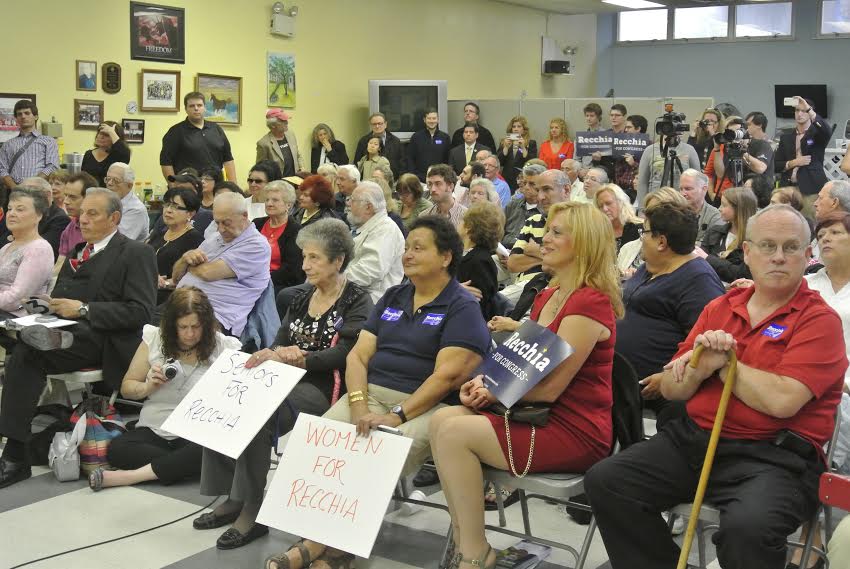 As was inevitable, Recchia questioned Grimm's ability to perform as a member of Congress in the face of the federal indictment against him. Grimm sidestepped the question, as he often has, saying he deserves his day in court and shifting to listing his accomplishments instead. He slammed Recchia for betraying middle class New Yorkers by voting to raise taxes and tolls.

Voters in the district, which encompasses Staten Island and parts of Brooklyn, are facing a stark choice. With just four weeks until Election Day, the race appears ripe for one candidate to take command.