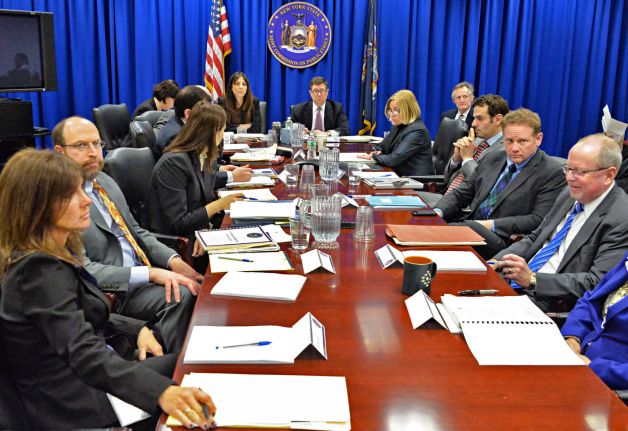 Over the past three years, a string of indictments of New York State legislators has been front page news, as has Gov. Andrew Cuomo's scuttled Moreland Commission to Investigate Public Corruption. All the while, New York's actual ethics monitoring organization has barely been mentioned, and the agency itself has made just a peep.

Albany watchdogs say that some of that silence may come from the commission's ingrained secrecy, but others insist it is due to the fact that JCOPE, the Joint Commission on Public Ethics, was originally delivered as a flawed entity - and purposefully so, designed not to do its stated job.

A skeleton crew of staffers was unsure whether they would keep their jobs when the new commission was announced - legislative and gubernatorial appointees had a slew of possible conflicts of interest from close relationships to legislators to having recently worked for the people who were appointing them. The commissioners' names and credentials were announced by a late evening press release ensuring their unveiling got minimal coverage that day. And so on.

Three years later, JCOPE appears to be making strides toward becoming a consistent regulatory body, but watchdogs remain concerned that the law creating it, flawed to begin with, continues to constrain.

Insiders say that the search for commissioners was an ugly one, with talented recruits turning down requests to serve for fear of a position that would surely be rife with scrutiny but bear little reward. JCOPE does boast commissioners with impressive resumes, though.

Since its creation JCOPE has seen staff turnover and controversy over the independence of its investigations. U.S. Attorney Preet Bharara subpoenaed JCOPE records - reportedly looking for a list of all the complaints the agency had received; Bharara has repeatedly made clear he has no faith in Albany to police itself.

Despite consisting of 14 commissioners it only takes three votes to block a JCOPE investigation. The commission can institute civil penalties, but it has to refer its findings to the Legislative Ethics Commission, which is made up of appointees by State Assembly and Senate leaders. JCOPE's investigations and their results are private and the body itself regularly goes into executive session during sensitive debate.

"They got off on the wrong foot," said Blair Horner of the New York Public Interest Research Group. "Their secrecy combined with a legislative veto sends the wrong message about accountability and prevents them from being effective." Horner also noted that a number of the governor's appointees previously served in his administration.

JCOPE's rules were negotiated by the Legislature and governor to ensure "fairness" and prevent political witch hunts, but good government advocates say the rules significantly handicap the agency from investigating and disciplining violations of the state's ethics laws.

However, some Albany watchdogs insist that JCOPE has begun to have an impact on the culture in Albany thanks to rules that require statewide electeds, legislators, and government staffers to submit financial disclosure forms that are designed to serve as a check on conflicts of interest. Legislators have fought tooth and nail against increased disclosures that would require those who serve as attorneys to disclose their clients.

The financial disclosures handled by JCOPE have shed the first real light on the outside income of Assembly Speaker Sheldon Silver, who is a trial lawyer for a firm and also runs his own private practice. Silver has disclosed making more than $650,000 doing private sector legal work in his latest disclosure. There has been concern for years that Silver's clients could have sensitive issues pending before the Legislature, but he is not required to reveal those clients and refuses to do so.

JCOPE also conducted its first-ever investigation of a sitting legislator in state history when it looked into the Vito Lopez sexual harassment scandal. JCOPE referred its findings to the Legislative Ethics Commission, which eventually fined Lopez $330,000.

"I think the Vito Lopez report was very encouraging," said Rachael Fauss of good government organization Citizens Union. "They could have looked at the case more narrowly, but they did find violations of the public officers law."

Fauss said Citizens Union supports changing JCOPE's voting process to make it more transparent and "less political." The organization issued recommendations last year that include allowing a supermajority, or a vote of 9 of the 14 members, to trigger an investigation. Barring that change Citizens Union recommends having JCOPE disclose when three members of one party vote to block an investigation supported by the majority of the commission. Either of those changes would require legislative action, which seems unlikely given that it would reduce legislators' ability to control the commission.

Fauss also wants to see lobbying data and financial disclosure information presented in a standardized format on JCOPE's website so that it will be easier to analyze and spot trends. There is some indication that the commission is early in the process of revamping its lobbying database to make it more user-friendly.

David Grandeau, former head of the state's now-defunct State Lobbying Commission, made a snoring noise when asked about the commission's record. Fittingly, Grandeu now represents lobbyists who have business in front of the commission and insists that JCOPE is made up of "lackeys" who aren't qualified and motivated to pursue major instances of corruption.

He also points to the case of David Ellenhorn, a counsel at the Attorney General's office, who JCOPE found took a free ride on a chartered jet from an opposing attorney. Ellenhorn had refundable airfare paid for by the State but did not request permission to take the jet trip or a refund for the unused ticket. JCOPE settled the case with Ellenhorn rather than institute a penalty. Grandeau characterizes the case as a disturbing "slap on the wrist" for what he sees as a clear lapse of ethical judgement. Grandeau was directly involved in the case, though, filing the complaint against Ellenhorn.

"It comes down to four simple words," said Grandeau."It's the people, stupid." Grandeau insists that despite the push for increased financial disclosure, journalists, watchdogs and commission members fail to use the information that is readily available. "Everyone talks ethics reforms and more disclosure but once we get more disclosure they don't do anything with them."

Horner said he believes JCOPE commissioners sign up in good faith but become quickly frustrated by a set of rules that leaves them hamstrung.

A source close to the commission pointed out that despite departures much of the original commission is still intact, even while members work full-time jobs, have families, and perform their duties only receiving meager per diem reimbursements from the State.

Aside from the Vito Lopez case, JCOPE's findings have solely been against low-level state officials and employees. One case found that Metropolitan Transportation Authority workers gave confidential information to a potential vendor. In another, a CUNY professor was fined $65,000 for steering the State to buy research software from a company he covertly owned.

It is unclear past the Lopez case what kind of impact JCOPE has had in regard to the Legislature. Has it acted as a deterrent of any kind?

While the commission has faced criticism for not adding more scalps to its trophy case supporters point out that JCOPE has had to do the work of actually putting guidelines in place for disclosure and exemptions.

However, there is concern among watchdogs that JCOPE is restrained by regulations and interference from both the executive chamber and the Legislature. "Why is it the commission went for 6 months without an Executive Director?" asked Horner of NYPIRG.

Turnover at the Executive Director position in JCOPE helps explain the concerns of Horner and others.

Ellen Biben was named executive director of JCOPE in February 2012. She left her position as Cuomo's inspector general to take the job. She then resigned in May of 2013 as a slew of legislators were indicted. Biben was replaced six months later by Letizia Tagliafierro who worked for Cuomo during his time as attorney general and later when he became governor as director of intergovernmental affairs.

Note: this article has been corrected to reflect that JCOPE has indeed posted the results of its Vito Lopez inquiry on its website and to note that Letizia Tagliafierro is still the ED. It has also been updated to reflect David Gandeau's involvement in the Ellenhorn matter and to more carefully phrase the subpoenaing of JCOPE records by Bharar's office.