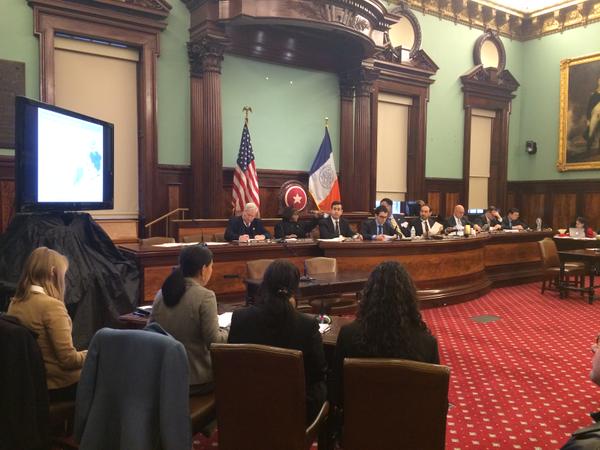 NEW YORK—It has been nearly two months since the Department of Small Business Services and the Mayor's Office of Veterans' Affairs released their long-awaited report on veteran owned-businesses. The report included a variety of plans to support veteran business owners, but recommended against City contract procurement goals for those businesses, a decision that angered many in the tight-knit veterans community.

On Wednesday, veterans were able to publicly voice their concerns about the report at a joint hearing of the City Council's Veterans and Small Business Committees.

First, Department of Small Business Services (SBS) Commissioner Maria Torres-Springer and her policy team, and Catherine LaPorte, chief of staff for Mayor's Office of Veterans' Affairs (MOVA) Commissioner Loree Sutton testified regarding the report. (Sutton was unable to attend the hearing because she fell earlier in the day and was injured).

Kelly Dougherty, executive director of SBS, and LaPorte of MOVA stayed to listen to veterans and advocates address the Council.

"The issuance of this report allowed us to discuss this issue at great depth and to get a better understanding of the struggles a lot of veterans face when they come out of active duty and want to open their own business," Council Member Eric Ulrich, chair of the Veterans Committee said following the hearing. "I wish more folks from the administration would have decided to stay."

Several veterans brought into question the numbers SBS used to make its recommendation against a veteran-owned business contract procurement goal. The SBS-MOVA report, titled "A Roadmap for Supporting Veteran Owned Businesses," estimates 6,200 veterans able to contract with the City, out of a total city veteran population of about 235,000.

"At this point, we believe we can have a larger and more immediate impact within the veteran community by assisting veterans through a wide array of outreach, training, and networking opportunities," Torres-Springer said during her testimony.

But the Veterans Advisory Board (VAB), which operates as a policy liaison between the New York City veterans community and MOVA, argued those numbers don't add up. During his testimony, VAB Chair Vince McGowan asked why the U.S. Census 2007 Survey of Business Owners data was not utilized in the report. The data, provided in McGown's written testimony, showed New York City had 39,236 veteran-owned businesses, excluding Staten Island due to insufficient data. This was in sharp contrast to the estimated 15,400 veteran-owned businesses listed in the SBS report.

The 2007 report is clearly old data, but may very well provide cause for looking at why in just eight years the number of veteran-owned businesses has seemingly decreased so dramatically.

"We encourage the City Council to scrutinize the methodology of [its new] report and consider its findings in this context," McGowen said during his testimony.

Not quite M/WBE
In the report SBS recommends veteran-owned businesses take advantage of the Minority and/or Woman-owned Business Enterprise (M/WBE) or the Emerging Business Enterprise (EBE) programs which already have procurement goals (though according to a report issued by Comptroller Scott Stringer they are often not met). SBS estimates 50 percent of the veteran-owned businesses in the City could take advantage of these programs.

But retired Army Captain Scott Davidson testified that trying to fit veterans into a program not specifically designed for them is counterproductive.

"We lose sight of the fact that a veteran status is the only status that is earned," Davidson said, adding that not having procurement goals is "almost insulting to veterans."

Davidson, who is a white male, said he has been unsuccessful in trying to do business with the City because he is unable to qualify for M/WBE or EBE status. His business, Vets MS, is currently doing contract procurement at the federal level because it has had veteran-owned business procurement goals since the late 1990s.

Using publicly available data, Davidson found there were only 4,024 M/WBE businesses certified to do business with the City, and only 20 enrolled in the EBE program, which is—by SBS's own admission—difficult to qualify for. Davidson argued Wednesday that the pool of 15,400 veteran business owners in the city far exceeds the number of M/WBE businesses currently contracting with the City.

"You are not going to attract any veteran businesses to the City of New York because there is no incentive to contract here," Davidson said.

More than a roadmap
The report's seven recommendations are welcomed by advocates because, as was repeatedly said in the hearing, the issuance of the report is a step in the right direction of more City support for veterans. But as Council Member Paul Vallone pointed out, each of the recommendations ends with similar language: more outreach, better working relationship, more solutions, better partner.

Torres-Springer countered, saying, "We are not waiting." She pointed to several ways in which the City is making immediate changes based on the recommendations in the report.

"To effectively create a goals program, we need to know more about the universe of businesses that want to sell goods and services to the City, which we will be in the position to do through the aforementioned changes to the PIP system," Torres-Springer said.

It should be noted that the onus will be on veterans to self-identify, which often poses a problem for veterans, particularly post-9/11 veterans who have trouble doing so. Torres-Springer said additional training for SBS staff at their business help centers begins next month, which could help eliminate some of the issues around self-identification.

In addition to improvements in PIP, Torres-Springer said the City will launch a new course titled, "10 Steps to Starting a Business for Veterans" in February and is currently recruiting for the Veteran Entrepreneurship Program, which also begins in February.

Outreach will be the key to success for these programs, especially reaching veterans who may not be eager to self-identify.

"Veterans will not come to you, you need to go to them," Avi Leshes, Director of Neighborhood Business Services with the Brooklyn Chamber of Commerce, said during his testimony Wednesday. "You can talk about all these great resources for veterans but if they don't know about it, it is pointless."

If there was one thing veterans can hold onto, it's that it appears procurement goals for veteran-owned businesses are not off the table.

"We have been, are today, and will continue to be open to any strategy or programs that allow us to more effectively serve veteran business owners," said Torres-Springer.

For Council Member Robert Cornegy, chair of the Committee on Small Business, that glimmer of hope that procurement goals for veterans could happen in New York City will work for now.

"I'm satisfied that the door has not been closed on doing set-asides," Cornegy said following the hearing. "Because [the City] chose to go this route now, it doesn't mean in the future they won't do set-asides."

UPDATE: Avi Leshes wrote to Gotham Gazette to add, "SBS has a suite of terrific services that the veteran community desperately needs. The Brooklyn Chamber of Commerce fully supports and applauds SBS in making outreach to the veteran community a priority, because without their efforts, veterans wouldn't know about these valuable resources."

Note: this article has been corrected to reflect that a represenative from SBS did in fact stay for the duration of the hearing. An earlier version of the article incorrectly stated that no one from SBS had remained after its representatives testified. We regret the error.