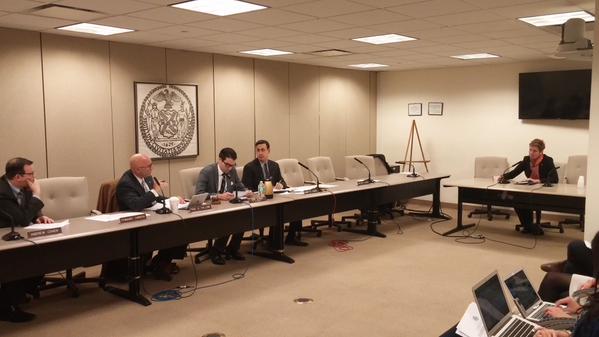 NEW YORK - With support from the de Blasio administration, and veteran advocates, it appears a third round of reform is headed to the Veteran Advisory Board (VAB).

The VAB, established in 1987, is charged with advising the Mayor's Office of Veterans' Affairs (MOVA) on all matters concerning veterans. After years of VAB inactivity, advocates pushed for reform via City Council legislation and in 2002 and 2006 changes were made to better organize the board.

But as the new City Council and mayoral administration took office in 2014, advocates once again began to press the Council on making the board more professional and transparent. An oversight hearing in October, 2014 gave the Council's Veterans Committee a road map for reform.

Through discussions with the de Blasio administration, the VAB, and advocates, Council Members Eric Ulrich, chair of the Veterans Committee, and Mathieu Eugene drafted legislation that will up the total of VAB members from nine to 11, ensure VAB members get City email addresses, and increase the required number of annual meetings from four to five.

To promote transparency, which advocates have long voiced concern about, the legislation will ensure public notice of VAB meetings are on the MOVA website and the meetings are recorded and put online.

"We really engaged the stakeholders throughout the process and we didn't have the hearing until after we had the chance to get the very valuable input from the members of the VAB and the advocates all along," Ulrich said during the council hearing for the bills on Tuesday.

"The provisions of each of these bills will actually contribute greatly to the future of the Veterans Advisory Board," Sutton said Tuesday. "As we bring in not only a larger and more inclusive membership that reflect current needs, as testified last fall, I think we will also be able to benefit greatly to this increased public access."

The bills had little pushback but there were a few issues that committee members will review before the bills could be ready for a vote.

There are currently no requirements for the VAB to make policy recommendations in their annual report. That report, which is posted online, contains meeting minutes and this past year began to list attendance. Council Member Ulrich asked for input on requiring some type of policy recommendation, be it administrative, legislative, or other.

Commissioner Sutton said she would welcome recommendations, but did not weigh in on requiring them. Current VAB Chair Vince McGowen said "it couldn't hurt," but added, "be careful what you wish for."

Jason Hansman, director of external program relations for Iraq and Afghanistan Veterans of America (IAVA) believes it is something the VAB should be doing. "If the role of the VAB is to advise the city, then absolutely, they should be on the hook for some recommendations," Hansman said Tuesday.

He also suggested students be considered for VAB appointments. Of the nine VAB positions, five are currently expired, although some members have continued to serve. Over a year into their own terms, neither Mayor de Blasio or Speaker Melissa Mark-Viverito have filled the VAB positions.

"Having these seats effectively sit empty gives the appearance that this board is not important to the City of New York," Hansman said.

For the data reporting bill, several advocates suggested defining the term "veteran" better. The VA has a particular definition they use to dispense benefits. But that often excludes veterans that served but were less than honorably discharged. It is referred to as "having bad paper."

"We are not here to pre-screen for the VA, so let's track all veterans," Coco Culhane, director of the Veteran Advocacy Project at the Urban Justice Center said Tuesday. She added that city services is often where veterans with bad paper go when they are turned away from the federal VA.

With the bills being warmly received and only minor tweaks to be made, the legislation is expected to be voted on during the next Veterans Committee hearing on February 25. If voted out of the committee, as expected, the full Council would vote on it at the first March Stated Meeting, which has not currently been scheduled.