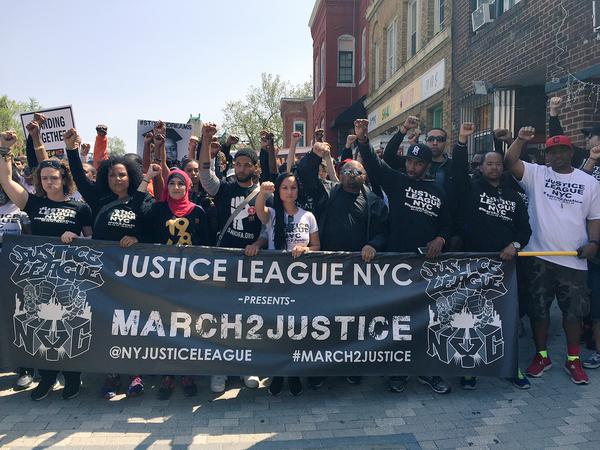 A 250-mile march started in Staten Island over a week ago culminates today in Washington, DC with a rally to protest police killings of unarmed civilians and push for criminal justice reform. The march, sponsored by Justice League NYC, has garnered national attention as participants have walked across major highways, through rural towns where porches are adorned with confederate flags, and in cities like Baltimore where tensions between police and citizens are high due to the death of Freddie Gray, whose spinal cord was nearly severed while in police custody, as well as other recent losses of life.

Activists and legislators say the momentum from the march will carry over to the legislative session in Albany, where a number of criminal justice reforms await action. Legislators return to Albany today after over two weeks away from the capital; the session is due to run for about two months until mid-June.

Justice League has led protests and actions across the city in the wake of the July death of Staten Island man Eric Garner at the hands of the NYPD. A grand jury failed to seek charges against the policer officer, Daniel Pantaleo, who put Garner in a chokehold, setting off even greater protests. Garner was black; Pantaleo is white.

Legislators will return to Albany with national headlines focusing on the killings of Walter Scott in South Carolina, Eric Harris in Oklahoma, Tamir Rice in Cleveland, and a case even closer to home. Protesters recently took to Albany streets to protest the death of Donald "Dontay" Ivy. A mentally ill man, Ivy died after being tasered by Albany police. Albany District Attorney David Soares is currently investigating the incident.

"The videos we've seen tell you these are not isolated incidents, this is a systemic problem. Many of us are not going to be quiet about this and we have the momentum," said state Senator Gustavo Rivera, a Democrat of the Bronx, who is the current Senate sponsor of a bill that would give the New York Attorney General jurisdiction to investigate and prosecute police misconduct.

Supporters of the bill say it will help prevent district attorneys from basing their decisions on whether to charge officers involved in shootings on their relationships with the local police force and how their actions will be perceived by unions and voters. A number of district attorneys oppose the measure because they say it undermines them and disregards their understanding of the impacted community.

In mid-March, Rivera officially requested the Republican-controlled Investigations and Governmental Operations Committee consider the legislation in a move to bring the bill to the Senate floor.

Rivera's bill isn't a new one. In fact it was carried for years in the Senate by the current Attorney General, Eric Schneiderman. Keith Wright, a Manhattan Democrat, has carried the Assembly version of the bill since 1999. The bill was given a print number on March 27 of this year and could come to a vote shortly.

Both Wright and Rivera support Schneiderman's call for Gov. Andrew Cuomo to issue an executive order giving the attorney general oversight over cases where unarmed civilians are killed by police. "The employ of an unbiased arbiter is desperately needed in this instance. I urge Governor Cuomo to use his executive authority to bring a sense of hope to communities of color in New York State," Wright said in a statement supporting Schneiderman's request.

However, Cuomo and Schneiderman are known to be bitter rivals and it is unlikely Cuomo will grant such a request. Supporters of the bill also acknowledge it is unlikely it will make it through the Legislature without changes.

Democrats are also pushing legislation proposed by Senate Minority Leader Andrea Stewart-Cousins that would create an "Office of Special Investigation" inside the AG's office to look into police killings of unarmed civilians. Stewart-Cousins asked the Finance Committee to consider the bill on March 10.

"Local district attorneys work with local law enforcement and I think it makes sense, in most cases and certainly these types of cases, that there is concern that there can be a conflict and even a perception of a conflict of interest," said Stewart-Cousins in December of last year while unveiling the bill in Albany.

Cuomo has also proposed a bill that would create a monitor who could recommend the appointment of someone like a retired judge as a special prosecutor in cases where a grand jury isn't called or it fails to convict.

"We aren't really about any of these special prosecutor bills right now," said Sarsour. She said her group's initial focus will be on "Raise the Age," an initiative that would stop New York from prosecuting 16- and 17-year-olds as adults. New York and North Carolina are currently the only states that do so. Cuomo made Raise the Age a major part of his budget but the policy was tossed out of budget negotiations, though some funding to implement it remained. Even some Democrats objected to the way Cuomo's plan would be implemented - they feared it would actually increase the jail sentences for some teens.

"It always seems that the bills that impact the black and Latino communities are the first to get thrown out," said Sarsour. "We are going to change that."

The special prosecutor bills are far from the only proposed criminal justice reforms. Cuomo has proposed legislation would make the grand jury process in cases involving police killings of unarmed civilians more transparent, create a commission on police-community relations, recruit more people of color into the police force, and allow him to appoint a special prosecutor in the killings of unarmed civilians by police.

While Cuomo has come under fire for not achieving many of his proposed criminal justice reforms in his budget he does appear to have added a sweetener to the budget to entice legislative action. The budget includes a $60 million appropriation for bulletproof vests and glass but it can only be accessed if the Legislature subsequently passes a number of reforms Cuomo has advocated, including his special prosecutor bill.