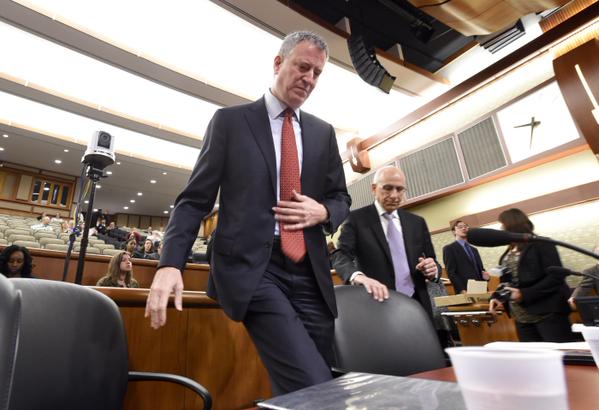 At the end of June this year the law that grants New York's mayor control over city schools will expire. The expiration was designed so that all interested parties can take part in a discussion of what works and what doesn't, and adjust the law as needed. Parents, teachers, advocates, and legislators all have ideas about how to make the system better. But this year there is major concern that there might not be room for a nuanced discussion.

Some education advocates have been locked in a battle with Gov. Andrew Cuomo over his education reform plans, especially around teacher evaluations. They say that in a typical year there might be major campaigns on mayoral control but instead the bandwidth on education issues has been largely monopolized. Renewal of mayoral control will likely come at the end of session, which is scheduled for mid-June, as part of a larger deal and it's unclear how much public debate will take place.

On top of that, the Legislature is still reeling from the indictment of former Assembly Speaker Sheldon Silver and now in limbo given the federal investigation into Senate Majority Leader Dean Skelos. Senate Republicans are scrapping to keep control of their slim majority in the face of investigations and illness and they have expressed a great hesitance to renew mayoral control under Bill de Blasio, New York's progressive mayor who worked to push the chamber into Democratic control in the recent election cycle. Republicans are now playing defense to some extent and according to sources may be looking to simply wait out the session. Making de Blasio sweat and wait is an enjoyable byproduct for some.

"Should there be safeguards, should there be caveats on mayoral control, and then how long?" Gov. Andrew Cuomo asked, framing the key questions at hand as he addressed attendees at an Association for a Better New York breakfast last Friday. "The mayor asked for permanent mayoral control," he said of de Blasio, "The Assembly's position is 6 or 7 years, mine is 3 years, the senate is basically zero. This has to be basically rationalized. There is a big gap between zero and permanent."

As much as the renewal of mayoral control looks like a battle between city-based Democrats who back de Blasio and Long Island and rural Republicans who oppose him, it is city legislators whose constituents live within the system and who want to have a nuanced discussion about reforming it. But this year those Democrats have mostly been quiet. "They may not want to say much because they just want to get it done and make the mayor happy," said one advocate who requested anonymity of those city Democrats.

When de Blasio came to Albany in February to testify before the Legislature he sold mayoral control as essential to city schools' chance at success, despite the fact he had once voraciously opposed Mayor Bloomberg's use of the same system. "Before mayoral control, the city's school system was balkanized," de Blasio said. "School boards exerted great authority with little accountability and we saw far too many instances of mismanagement, waste, and corruption."

One Democratic legislator noted that if Bloomberg had been the one delivering that statement he would have been met by derision and vitriol but Democratic legislators bit their tongues. Many, especially in the city's poorest neighborhoods, see the city school system as in need of major improvement. De Blasio says the same, but professes faith in his vision to get there and argues that with mayoral control it's clear that he is accountable for the school system's performance.

A number of Democrats in both houses have three major reforms they'd like to see accompany an extension of mayoral control.

The first is greater accountability in the awarding of contracts by the Department of Education. Sen. Liz Krueger, a Manhattan Democrat, said she believes the city comptroller should be able to review those contracts. Sen. Diane Savino, a member of the Independent Democratic Conference from Staten Island, echoed that concern, saying that under previous mayors there had been wasteful and no-bid contracts. Krueger brought up City Time, the city's 911 revamp, and other projects where contractors botched projects and cost the city millions. "There has to be more accountability," said Krueger.

Concerns were recently raised when the Department of Education wanted to award a contract to expand internet access in city schools to a company that was tied to a kickback scandal.

"I've said repeatedly that mayoral control should be renewed but amended," Savino told Gotham Gazette. Savino said she wants to see changes to the Panel for Educational Policy (PEP) that votes on policy changes. Currently, the mayor appoints 8 of the 13 PEP members. "It is functionally a staff meeting for the mayor with no diversity of opinion," said Savino. "We need to look at adding borough presidents, board members, something. I don't know what the exact answer is, but we need to look at it."

Parental involvement has been a hot topic surrounding mayoral control since it was established in 2002. A number of legislators are concerned that the city's Citywide and Community Education Councils (CECs) do not allow for enough parental participation in policy decisions. "They don't seem to be producing the parental activity they were intended to. I'm not sure why it's not happening, but we need to look into it and see if it is something in the law that needs changing."

Senate Republicans and Gov. Cuomo will likely tie renewal of mayoral control to raising the cap on charter schools. Cuomo has insisted that the charter sector would basically be "out of business" once it hits the cap in the city, which it is nearing. In outlining his 2015 agenda, Cuomo argued for raising the cap by 100 schools and eliminating any location-based ceiling within it, as New York City now has.

Republican's have also indicated they may hold a series of hearings to examine mayoral control but nothing has been formally scheduled.

Democratic Sen. Simcha Felder, who caucuses with Republicans, told the New York Post that the charter cap is directly tied to mayoral control. "Part of the discussion is that there should be no cap on children getting a better education. There should be no cap on children," said Felder. John Flanagan, the Senate's Education Committee chair who earlier this year indicated that mayoral control needs serious reconsideration, did not return calls for comment.

Public Advocate Letitia James held a series of "Our School, Our Voices" public forums on mayoral control across the five boroughs earlier this year. The focus of the events largely became increasing community say in the policy decisions. James' office is expected to release a report with recommendations on mayoral control sometime in May.

"Mayoral control must be amended to expand parental and community involvement," James said in a statement to Gotham Gazette. "Earlier this year, my office held a number of community forums throughout New York City to discuss the future of public schools and it became clear that New Yorkers will no longer allow their voices to be drowned out of our schools system."

Despite the myriad of opinions on control the stakeholders don't appear to be rushing toward a resolution or even a basic discussion.

When asked if serious conversations about renewal had begun yet, Savino replied: "No. There is always plenty of time in Albany."

The Last Time
In 2009 mayoral control expired as Democrats and Republicans battled for control of the state Senate. The policy lapsed from the end of June until August 6. Though Mayor Michael Bloomberg had warned of great chaos if the law was not renewed, his allies on the Board of Education kept his policies in place and the law was eventually renewed, with tweaks like giving the Independent Budget Office more oversight over spending.

This year may not feature the same chaos as around the time of the '09 Senate coup, but with scandal in both houses and the precarious position of the Senate Republicans, things are similar.

Republicans are loathe to move on major issues as they are preoccupied with maintaining their majority. They have little incentive to deliver on mayoral control or renewal of rent regulations as only two of their members hail from the city and they appear to be holding onto a grudge against de Blasio. In 2009 Senate Republicans were the cinch votes for renewal of mayoral control of schools as Bloomberg had pumped millions into their campaign coffers.

When Senate Democrats finally won control of the chamber, then Democratic Leader John Sampson pushed for greater checks and balances on the mayor's power. At the time the Assembly had passed a bill that only slightly changed mayoral control - Sampson wanted to limit the mayor's ability to fire members of the Panel for Educational Policy and increase parental participation. It was the Senate Republicans who supported the Assembly's bill that offered fewer reductions to the mayor's influence.

Another major change from 2009 - at least thus far - is the absence of campaigns and grassroots movements to influence the policy. Parents' groups like Class Size Matters marched and rallied for more involvement; Bloomberg's allies created Mayoral Accountability for School Success and lobbied Albany heavily. This year those groups are missing in action. Union-allied education groups are tied up battling Cuomo, fighting on teacher evaluations, testing, and Common Core. Some advocates say they are considering action to influence the mayoral control conversation, but so far nothing has materialized.

Some legislators say that de Blasio may have learned from Bloomberg's and his own mistakes. Being critical of the Legislature backfired for both of them. In July 2009, frustrated with the impasse in Albany, Bloomberg took to the radio to criticize the legislative process. "If you remember Neville Chamberlain, no matter how many times you said yes, that's the starting point for the next round," Bloomberg said referring to the former British leader's negotiating trivails. "There's always more, more, more. I think that just the time for that is over."

Legislators cried bloody murder and accused Bloomberg of comparing them to Hitler. Negotiations stalled. De Blasio has already felt the sting of insulting opponents in the Legislature. Some legislators assume he is simply waiting quietly hoping not to ruffle any more feathers so that mayoral control is renewed in a simple trade for lifting the charter cap, which appears an inevitability in itself.

With only 22 days left of legislative session, the time for debate appears to be severely limited. In 2009 the New York Times quoted former Republican Senator Frank Padavan giving his assessment of the debate and the future of mayoral control: "There is no doubt in my mind that those of us who are here will be having a similar discussion then," Padavan said looking toward 2015. "We will look at the last six years and ask: Did our changes help?"