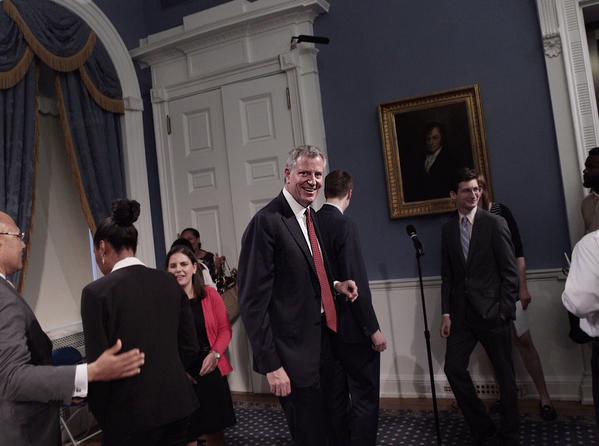 Mayor Bill de Blasio will outline his Fiscal Year 2016 Executive Budget on Thursday afternoon at City Hall. The mayor will also release his administration's first iteration of the city's 10-year capital plan. While there may still be a few surprises, we already know quite a bit about the changes the mayor has made from his preliminary budget to his executive budget.

The budget presentation will build off the mayor's $77 billion Preliminary Budget, which he unveiled in February. That spending plan was then vetted by the City Council throughout March hearings, leading to a formal response from the Council on April 14 and ongoing negotiations, heading toward a final agreement between the mayor and the Council by the end of June. City Council Executive Budget Hearings are set to begin May 18 and finish June 9. The city's fiscal year begins on July 1.

It appears the mayor is accounting for most of the items listed above and other council asks in some fashion or another, though on several fronts the details have not yet been released. Many are eagerly waiting to see where the mayor has come down on the expansion of the NYPD force.

But in the days leading up to Thursday's executive budget presentation, the de Blasio administration has previewed several elements of the new spending plan as reported by a variety of news outlets. Some of these relate to City Council asks, some do not - a rundown of what we know so far:

This week, the mayor and First Lady Chirlane McCray, who chairs the Mayor's Fund to Advance New York City, "announced the creation of the Center for Youth Employment, which will coordinate and expand efforts to connect New York City's young people to opportunities for career exposure, summer jobs, quality skills-building programs, supportive mentors, and thoughtful guidance towards college and a career." The Center is a public-private initiative "conceived and launched by the Mayor's Fund to Advance New York City in collaboration with City agencies and private partners, [and] will be integrated into the existing Mayor's Office of Workforce Development."

The mayor also outlined what he'd like to see from Albany in terms of housing and tenant-protection policy, as reported by the Times, and, as reported by POLITICO, the mayor will be heading to Washington, DC next week to both lobby federal lawmakers for more infrastructure and transportation funding, as well as to unveil the "Progressive Agenda" he and others have been formulating to affect the national conversation around inequality and opportunity.