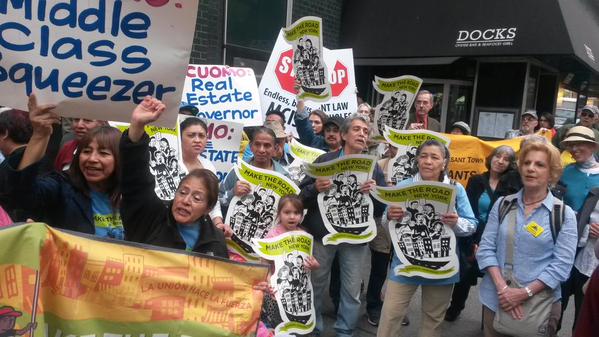 Tenant advocates, angered by Gov. Andrew Cuomo's recent comments that they see as favoring landlords and the real estate industry, protested outside his Manhattan office on Wednesday afternoon.

The action, which featured members of Metropolitan Council on Housing, Tenants and Neighbors, and Make the Road New York, is the first in what will be an onslaught targeting Cuomo and bringing up his close ties to the real estate industry, especially the fact that his biggest donor is Glenwood Management, the group tied to the federal complaints against former Assembly Speaker Sheldon Silver and Senate Majority Leader Dean Skelos.

As legislative session continues in Albany and key housing-related legislation is set to expire, advocates want to see an end to the 421-A tax break for developers and strengthening of rent regulations.

Cuomo told The Association for a Better New York on April 24 that dysfunction in Albany could lead to a straight extension of the rent laws and the controversial 421-A program that has also been at issue in the Silver and Skelos investigations. Tenant activists have taken Cuomo's comments and the possibility of his prediction coming true as an assault on their goals.

"The governor's comments were unacceptable," Javier Valdes, co-executive director of Make The Road New York, told Gotham Gazette. "It shows a real disconnect about the crisis that is going on for tenants in New York and the suburbs."

Jonathan Westin of New York Communities for Change said that his organization hopes to pressure Skelos, a Republican, and Cuomo, a Democrat, on rent laws so that there isn't simply a straight extension. "The governor supports the status quo and make no mistake about it, the status quo is a victory for real estate interests. The status quo means thousands more affordable apartments lost," Westin told Gotham Gazette.

Thomas Waters, housing policy analyst for The Community Service Society of New York, told Gotham Gazette he simply doesn't believe dysfunction is going to get in the way of negotiating the issue. "We saw how quickly the Assembly moved on from Silver's indictment," he said.

The protesters circulated a letter to Cuomo on Monday that read in part, "We write to express our outrage over your recent comments that displayed, at best, indifference to New Yorkers who are struggling to pay their rent in rent-regulated apartments. Low- and moderate-income tenants who live in more than 1 million rent-regulated apartments are at a breaking point because of the failure of leadership in Albany."

Tenant advocates are increasingly unnerved by Cuomo's comments about the rent laws, 421-A, and Skelos. On Wednesday Cuomo said he would negotiate with Skelos because he couldn't pick who runs the Senate and that 421-A must be extended. He also was asked to explain his relationship with Glenwood Management. "They are a donor of mine. They are a donor of many elected officials across the state, and that's basically the interaction," Cuomo said. "I've had nothing to do [with them], except they've been political supporters of mine."

Valdes said his group plans to convey to Cuomo that recent scandals have changed the playing field because they've exposed how things work in the backroom.

"The governor made comments in Syracuse that 421-A has to be renewed and yet it is in the complaint against Senator Skelos where he is getting kickbacks from the real estate industry," said Valdes. "There is a major disconnect here. The governor is supporting the status quo and the status quo just won't cut it anymore. We won't stand for tax breaks that favor millionaire developers while our members are driven out of their apartments.

The complaint against Skelos alleges that Glenwood, Cuomo's largest campaign donor, provided Skelos' son with $20,000 for doing no work after Skelos pressured Glenwood reps to provide his son with business.

It appears one of Glenwood's higher-ups is now serving as a witness and informant for federal investigators. Cuomo defended Glenwood during an appearance in Syracuse on Wednesday, saying he would not return donations from the company and its main players because there was no proof of "wrongdoing."

"The difference this year is that it is all out in the open," said Westin. "We see how the billionaire developers influence policy with campaign donations and illegal bribes and we aren't going to let it stand."

"Carl can't just go in there with Cuomo and Skelos to negotiate," said Michael McKee, treasurer of Tenants PAC. "He has to take hostages. If they want to get anything they want, Carl has to get stronger rent laws. It's up to him."

Last Friday, legislators, union heads, and Mayor Bill de Blasio came together for a strategy meeting on rent law lobbying. According to numerous sources, the meeting convened by 1199 SEIU was designed to involve more unions in the effort and convince union heads that the issue is critical to their members.

On Tuesday, de Blasio issued a statement supporting stronger rent laws and advocating a number of specific policy points like reducing how much landlords can raise rent for repairs, ending high-rent vacancy decontrol, and eliminating landlord's ability to raise the rent of rent controlled apartments by 20 percent after it is vacated. He did, however, also argue for the extension of 421-A, as long as it is tied to more clear mandates for the affordable housing that is supposed to come with the tax benefits. "No more tax breaks without building affordable housing in return," de Blasio said in a statement to the New York Times.

"The biggest thing that has changed this time around is that we have the mayor on our side for the first time," said Waters, who said de Blasio is backing the choice measures out of the slate of policy reforms his organization supports. Getting over the hurdles of a Republican-controlled Senate and a real-estate friendly governor will not be easy, of course. Plus, many Democrats at all levels of government receive large donations from real estate interests.

Landlord groups like the Rent Stabilization Association insist that a number of the measures in the rent laws that de Blasio and tenant advocates want eliminated are critical in allowing landlords to afford the costly maintenance of apartments. The RSA is currently running a television spot that laments the plight of landlords and Albany's inability to come up with a solution to help landlords maintain the housing stock.

Valdes and Make the Road will be in Albany every Tuesday for the rest of session, they've said. Session is scheduled to go until mid-June, and advocates plan a large rally during the first week that month. Other rallies are expected across the city and in Albany, with major one in Manhattan's Foley Square on Thursday, May 14.

Valdes said that his group sees an "affordability crisis" building across the city and the suburbs. "People used to think of this as a Manhattan problem but I can tell you it is an outerborough problem now."