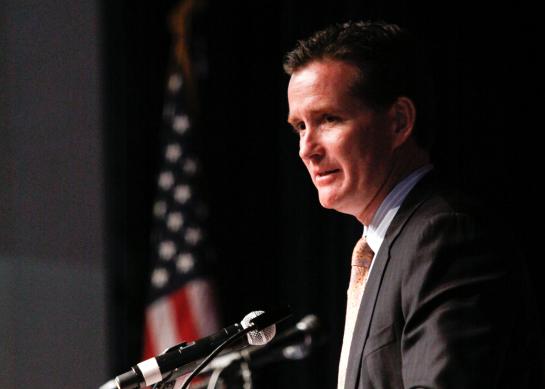 John Flanagan, Republican state Senator, is now Temporary President and Majority Leader in Albany's upper chamber. He replaces Dean Skelos in leadership following the fellow Long Island senator's arrest on federal corruption charges. With a nod to upstate legislators, Flanagan retains Tom Libous as deputy leader, despite Libous himself being under federal indictment.
In his new, higher-profile, more powerful leadership role, Flanagan will be at the table with Governor Andrew Cuomo and Assembly Speaker Carl Heastie, both Democrats, as all major policy decisions are negotiated. With increased power comes increased scrutiny - just after being elected to lead the Senate, Flanagan was asked repeatedly by reporters on Monday if he is under federal investigation. He indicated he is not. As both Skelos and former Assembly Speaker Sheldon Silver were brought down by federal indictments related to financial matters, whether extortion, kickbacks, or other charges, the political finance network of John Flanagan is now more relevant than ever. While Flanagan last week quit his other job as a lawyer leading up to his Senate ascent, he has been in the Legislature for more than twenty years and has a long campaign finance record, both in terms of donations to his campaign accounts, and expenditures made by those accounts.
Here is a look at Flanagan's fundraising velocity across his career in the New York Senate, which he joined in 2003 after many years in the Assembly: 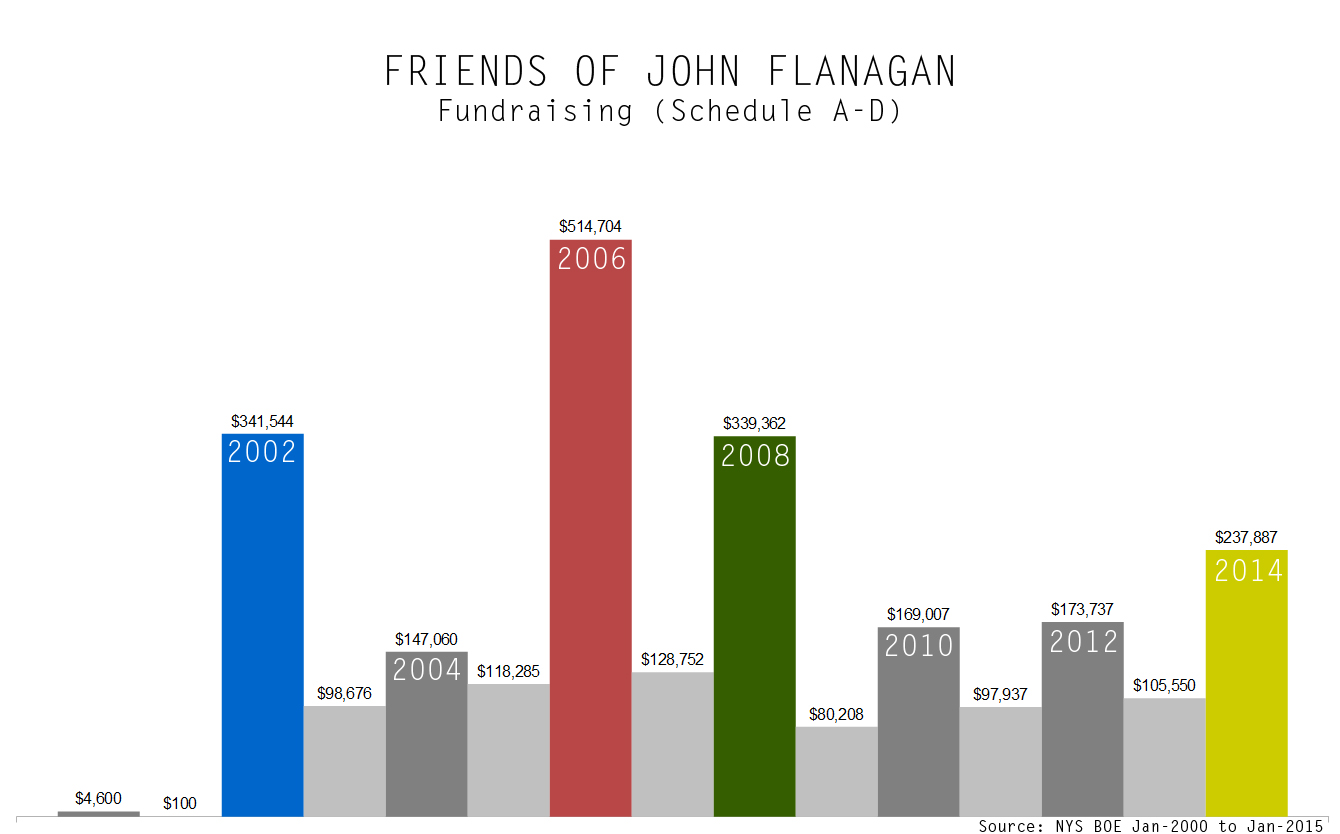 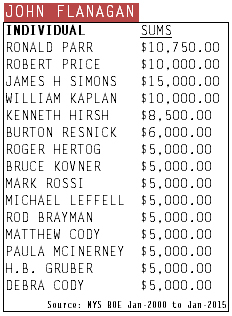 This list is almost entirely liquor- and beverage-related with a tiny touch of real estate and Up From The Ashes, Inc, which is associated with Rod Brayman (who is in beverages).
Between the use of multiple entities, and all the variations in how names are entered, identifying these relationships can be tricky. When special care is taken to review the diversely named enterprises of Leonard Litwin and Glenwood Management, $31,500 in accumulated contributions from these sources to Flanagan emerges. This means that while traditional methods implicate BOTTLEBARGAINS NORWOOD LIQUORS INC. as Flanagan's largest corporate donor, this honor apparently goes to Glenwood, instead. By comparison, Dean Skelos received over $110,000 from Litwin, while John DeFrancisco (across two committees) received $36,100.
Sen. Flanagan's top Institutional donors (2002-2014): 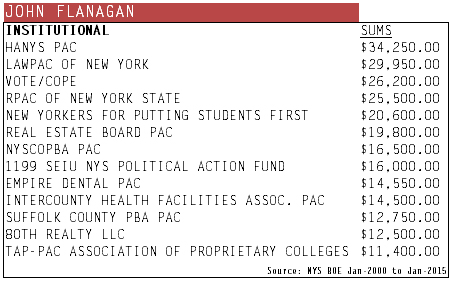 Flanagan's chairmanship of the Education committee, at the very least, is apparent in the institutional donor list above. Otherwise, the major spenders in his world are the same as the rest of leadership, past and present. As senate leader, Flanagan will no longer chair the education committee, he has yet to name a successor.
Looking at Flanagan's campaign account expenditures show interesting data of how the senator has spend that money (again, 2002-2014): 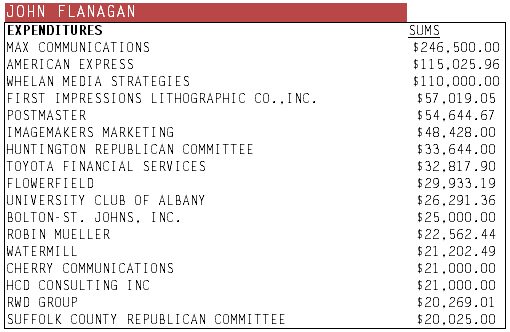 Like his Assembly counterpart, Democratic Speaker Carl Heastie, Flanagan appears quite comfortable putting massive expenditure on his American Express. At $115,025.96, that is where 4.49% of every dollar Flanagan raised actually went.
Using information (unevenly supplied) in the memo column, it appears that most of this credit card money is spent on food and liquor, followed by gas and hotels. The rest of that lump sum is spent on late fees and interest payments to American Express.
Standing out from this list are Flanagan's campaign payments to Toyota Financial Services - presumably an auto loan - in the total amount of $32,817.90, so far. It would appear he is financing an automobile with campaign account funds.
A common feature of leadership and putative leadership in each legislative chamber in Albany is being a net creditor to your party-conference organizations. While some tithes to parties are handled as expenditures, larger sums are often handled via Schedule H (transfers out). Here are nearly a dozen committees to which Flanagan transfered money (2002-2014):