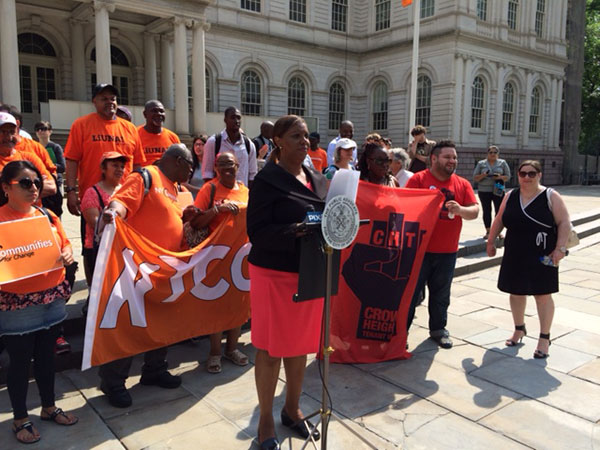 With rent laws set to expire on Monday city electeds including Public Advocate Letitia James, Assembly Housing Chair Keith Wright, and state Senator Adriano Espaillat are focused on providing tenants with legal help should landlords take advantage of a chaotic situation, while simultaneously pushing for Assembly Speaker Carl Heastie to hold out for the best deal for tenants as he negotiates with Gov. Andrew Cuomo and Senate Majority Leader John Flanagan.

"If the rent laws expire on Monday...we want tenants to know that they will have legal protections and recourses to stay in their apartments," said James at a press conference on Friday at City Hall where she announced her office would make housing lawyers available to tenants while calling on Albany leaders to "do their job."

"We know that there are too many landlords who are looking for any excuse to push out, to evict rent-regulated tenants and make a quick buck," James added. Espaillat and Wright are expected to hold events for tenants over the weekend. (Both men are also competing to replace Rep. Charles Rangel in Congress.)

Tenant advocates appreciate the help but many of them doubt anything horrible will happen to tenants should a deal not be reached by Monday. In fact many advocates celebrated on Thursday when Assembly Democrats rejected an offer from the Cuomo administration that they felt did not significantly address vacancy decontrol, the process by which landlords are allowed to increase rent until apartments are no longer rent regulated. Advocates stress that a strong bill that prevents more apartments from being removed from the affordable housing rolls trumps an on-time deal.

According to a number of sources the Cuomo administration floated a proposal that would have increased the decontrol threshold from $2,500 to $2,700 per month; increased fines for landlords who harass tenants; prevented landlords with outstanding fines from applying for rent increases based on improvements made to apartments; and made the governor's Tenant Protection Unit part of existing statute. The plan would extend the controversial 421-a tax credit for one year.

The Cuomo administration is also trying to link the rent law extension to the governor's prized education tax credit. Sources say the Assembly Majority flatly rejected Cuomo's plan after conferencing the matter. Many members left the capital on Thursday, but Assembly Democrats, at least, are due back on Sunday.

The horse trading is expected to play out all weekend. Senate Republicans are working on a compromise to renew 421-a that combines elements of Mayor Bill de Blasio's proposal and with the old bill.

Sen. Adriano Espaillat said he plans to issue a guide for tenants should the legislature fail to extend the rent laws on Monday but he favors a strong deal over any basic extension. "I'm not going to vote for a basic extension of any kind," said Espaillat. Asked about the floated deal he responded: "A two hundred dollar increase? That's a good meal at a city restaurant. That's how weak it is!" He urged tenants to check their leases so that they know when they actually expire.

On Friday afternoon, Espaillat joined James, Wright, Council Member Jumaane Williams, several of the borough presidents, and others for a brainstorming session about what to do in the case of expired regulations.

Mayor Bill de Blasio participated in a Friday phone conference will AARP members on the importance of renewing the rent laws. The mayor has been pressuring Albany to act, while Cuomo has continued to insist that time has run out for detailed debate over bills.

De Blasio acknowledged that with the lateness of the hour it is unclear whether Albany will renew the rent laws let alone strengthen them, but he also laid out his priorities for enhancing the laws. "We've got to end vacancy decontrol," the mayor said. "That is the way we've lost so many affordable apartments – landlords being able to take them out of rent regulation when they reach a certain rent level. We've got to end that practice. We've got to end the vacancy bonus. That's the way that landlords get a huge uptick in rent whenever an apartment turns over that's rent regulated...And we've got to stop the giveaways to landlords. When they do capital improvements, sure they have a right to make sure that those capital improvements are paid for in the rent, but that's all they should get," said de Blasio.

The mayor called on Albany to act and warned of chaos if the regulations are not renewed.

Many advocates are preparing for a fight over rent laws that could not only go past the Monday deadline but past the scheduled end of session on Wednesday. Senate Republicans have historically pushed negotiations on rent renewal until the last minute to strengthen their hand.

Sen. Espaillat said the Assembly Majority needs to resist any urge to agree to a simple extender to avoid going past the deadline. "We need to continue to push and ask the Assembly and the Governor to make this their priority," said Espaillat, who pointed to Cuomo's recent op-ed in the Daily News where he wrote the city stands to lose 100,000 units of affordable housing if nothing is done. Cuomo has threatened to call the legislature in for special session after Wednesday if no deal on rent regulations is reached.

Rent regulations "has to be the priority," Espaillat said. "It needs to get done first. If Senate Republicans want their [property] tax cap then they need to do this first. A one year extender won't work. If there is no political will to do it this year, there certainly won't be any next year during a political year when everyone is busy running for reelection."