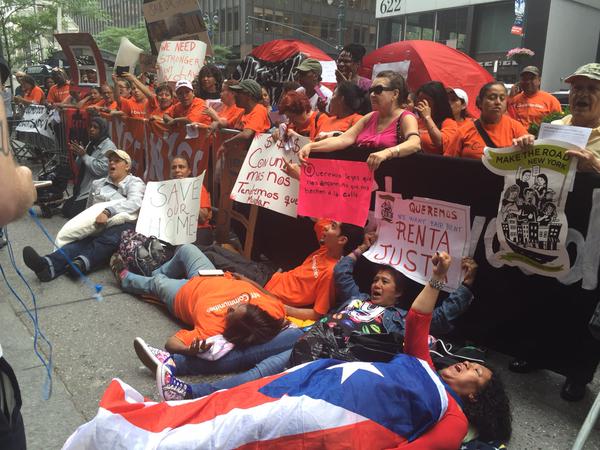 Tenants celebrated when Gov. Andrew Cuomo's Tenant Protection Unit (TPU) appointed a monitor to oversee 51 apartment buildings owned by the notorious Castellan Real Estate Partners, but for the past two years those same tenants say the conditions in their buildings have deteriorated while the TPU has failed to take action.

The monitor was named as part of a larger settlement, reached in January 2014, and tasked with tracking the New York City landlord. The Cuomo administration hailed the agreement as "groundbreaking" and proof that the TPU was to be taken seriously. Cuomo boasts that the TPU, created in 2011, has returned 40,000 units to the rent-regulated rolls.

Maria Aguirre, a resident of an eight-unit Castellan building in the Bronx, says she and other tenants have lived a nightmare. Aguirre says tenants have had to go months without heat in the winter and without gas to cook with for a year; that they've faced harassment from building supers while holding public meetings; contended with unchecked rat and mold infestations and, in some cases, lead poisoning.

Tenants have refrained from criticizing the TPU over the eighteen months, but now they say they've had enough. "We believe after working with the TPU for two years we can grade them in terms of their role as a protector of tenants," Aguirre told Gotham Gazette. "From my perspective the governor and the TPU used us to promote themselves, yet we as tenants haven't seen any real changes. We were used for publicity purposes."

Tenants plan to hold a press conference Wednesday at which children of tenants will present the TPU with a report card. It is expected the grade will be an 'F.'

In announcing the settlement with Castellan, the Cuomo administration promised "a major settlement agreement that will help make communities more just and affordable by ending the reported harassment and intimidation of mainly Spanish-speaking immigrant tenants in nearly 1,800 apartments within 49 buildings in Harlem, Washington Heights, Brooklyn and the South Bronx."

The Cuomo administration did not return a request for comment for this story.

For some, the situation with Castellan isn't exactly surprising, the group has a reputation for being extremely effective at booting tenants from their apartments and jacking up the rent. Their cases against tenants dominate housing courts across the city. Juan Gonzalez of the Daily News has detailed tenant complaints extensively in a series of articles.

Castellan has celebrated its ability to achieve "value enhancement" in the rent-controlled buildings, allowing them to increase rents. When Castellan first purchased 50 buildings across the city with more than 1,700 rent-stabilized apartments many tenants reported a major uptick in harassment. They were called into meetings and interrogated by Castellan staff, who demanded proof of citizenship and income. Tenants who could not provide proof were told they would be evicted in 30 days. Later, tenants say they found unexplained fees added to their rent bills and many tenants were pressured to sign letters agreeing to vacate their apartments.

Things were supposed to change when the TPU got involved. Aguirre and other tenants organized and, after a very public protest in 2012, were contacted by the TPU. The TPU investigated for seven months, issuing its first subpoenas. It eventually settled with Castellan, announcing the deal in January 2014. The group agreed to reimburse Spanish-speaking residents it had improperly evicted and to submit to a monitor for a term of up to three years to to ensure that Castellan was not harassing tenants, provided equal treatment to Spanish-speaking renters, and that employees received improved training, including in not harassing tenants.

Instead, many tenants say the monitor, Peter Heuzey, acts more as an agent for Castellan, repeating the company line rather than independently verifying claims. They say he ignores their calls and only acts when faced with the spectre of public criticism. When tenants complained that a super had tried to prevent them from meeting and then crashed their gathering, screaming and making threats, the monitor reportedly told tenants his behavior was not "representative" of Castellan as a whole - despite that fact that the monitor had been appointed because of Castellan's history of harassment. Tenants claim the monitor's office looks to them to provide information on service interruptions and maintenance lapses, rather than investigate independently.

Aguirre says that the monitor ignored her calls last November when she tried to complain that the heat in her building had been out for days. When she finally reached Heuzey's office, he lectured her for not calling more persistently and then informed her the building would be without heat for weeks because the boiler was missing a part. Heuzey was hired by Castellan but approved by the TPU. Tenants are concerned his loyalties lie with Castellan because it pays him. Heuzey is a partner at O'Connor Davies LLP, a public accounting firm.

Aguirre says she argued that such a period without heat was unacceptable but the monitor insisted nothing else could be done. Tenants then entered a protracted battle to have Castellan provide heaters. "[The monitor's] response to the request for heaters was that it would be extremely difficult for Castellan to provide heaters for an eight-unit building," said Aguirre.

Castellan did eventually provide heaters but tenants were forced to use them over a period of two months which drove up their electricity bills and in some case made their financial situation untenable. Castellan, in turn, took a number of tenants to court for not paying their rent.

Sandra Cruz Morales, a resident of one property at 1469 5th Ave. in Harlem, was involved in the initial organizing that drew the attention of the TPU. "It has been very difficult for me," said the mother of one. "Three years years ago they wanted to aggressively displace us but we fought and organized, and were able to remain."

She says that things have just gotten worse in other areas since the TPU began to monitor the situation. She has been without gas for her stove for three months, while other Castellan tenants have faced the problem for over a year, she says. "It is very difficult to live without gas," said Morales through a translator. "For example, I get out of work at six, I have to run to get my daughter out of school. She's very hungry when she gets out, so I have to cook using a burner and that is very difficult and it costs a lot to buy food out."

Morales said that while Castellan has provided burners for tenants to cook on, the hot plates have spiked her electricity costs and she has yet to be reimbursed. She knows some tenants who waited a year for reimbursement. Castellan has taken some of those tenants to court for failure to pay their rent.

According to Morales the monitor has insisted that the problem is on Con Edison's shoulders, but she wants him to do an independent investigation as she was without gas for eight months before the monitor took over.

"I complained about it to the monitor and asked, 'When will it be taken care?' His office says, 'We Don't know who is responsible,'" said Morales. "He doesn't know anything so he can't help us."

Serrapica said that service interruptions came about because Con Edison has been on high alert following gas explosions in East Harlem and the East Village and that "someone called 311 and reported the smell of gas." He says the lines in some buildings have to be replaced and then inspected by multiple agencies. Most tenants impacted by the lack of service have received rent credits this month, he said, but tenants of two buildings where work recently began have yet to be reimbursed.

Tenants say other parts of the agreement between the TPU and Castellan go unenforced. For example, communications between Castellan and tenants are supposed to be provided in English and Spanish, but tenants complain they continue to receive notices exclusively in English.

Serrapica said the TPU has been helpful in helping him understand "grey areas" of the law. He encourages tenants to use Castellan's 24-hour help line if they have a problem but to feel free to contact the TPU if they feel it necessary.

Tenants say that they have contacted the TPU multiple times, over the phone and in writing, but have been ignored. "Since the monitor doesn't listen we've been forced to turn to the TPU, but they've ignored us," said Aguirre. "We've shared our grievances with them. We have no other recourse but go public. The TPU should intervene. They should be protecting us."

Morales said she isn't looking for a free ride, or even a pro-tenant monitor. "We were the ones who fought to get an independent monitor in place," said Morales. "All we want is someone who is impartial, I don't expect him to get my rent for free, I just want someone who will follow up, independently verify Castellan's claims, and not treat us like we are making up stories."