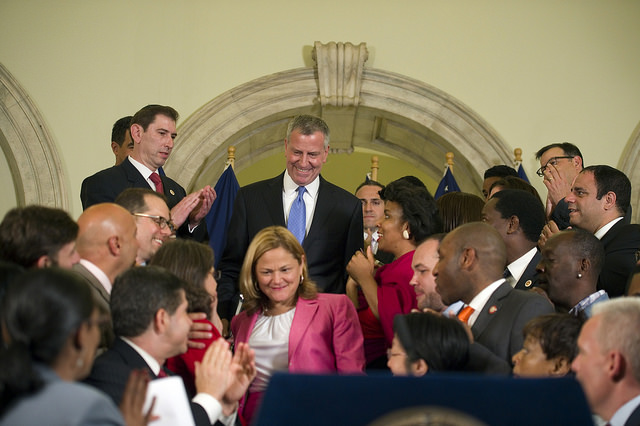 Wednesday, July 1, marked the beginning of the new fiscal year under a $78.6 billion budget agreed upon by Mayor Bill de Blasio and the City Council.

When he unveiled his preliminary budget outline in February, de Blasio hailed the plan as “scrupulously fiscally responsible.” The 2016 budget continues a trend of increased spending: from 2010 to 2014, the budget increased at an average of around 4 percent per year. The first budget of the de Blasio administration increased spending by 6.3 percent. Now, the second de Blasio budget has grown 5.2 percent from 2015.

“[Fiscal 2015] was his first year and he was able to implement a lot of his new initiatives,” explained Rachel Bardin of Citizens Budget Commission, a nonpartisan and nonprofit civic organization. The increased spending went toward funding programs like universal pre-K, issuing municipal IDs, and homelessness prevention. Spending also increased as the mayor settled contracts with labor unions - de Blasio inherited a situation where all of the city’s municipal unions were working under expired contracts.

This year, the budget has grown again, raising several eyebrows. Part of this growth is due to an increase in personnel, including the hiring of an additional 1,297 police officers. An increased city headcount is expensive not only due to annual salaries, but also because of health care and pension costs. While de Blasio has expanded spending, he has also grown the savings funds the city keeps, able to do both because of the flush times the city is enjoying.

The trend of growth in spending has prompted a cautious attitude in some, including city Comptroller Scott Stringer, who called on the de Blasio administration to find steeper agency savings and allocate more money toward budgetary reserves. Bardin, of CBC, warns of the implications of the uptick in spending if there is an economic downturn— the likelihood of which is “inevitable,” according to a CBC statement. De Blasio and his budget team agree. The mayor struck a very serious tone during his May executive budget presentation, warning that the economy will certainly not continue to grow as it has been.

“We have additional spending built into the budget and our revenues in the downturn wouldn’t be able to support that,” Bardin told Gotham Gazette. With insufficient funds to support the increased spending, a situation could occur in which the city must consider raising taxes, laying off employees, and ending or reducing programs.

But Doug Turetsky, Chief of Staff for the Independent Budget Office, pushed back against the idea of an inevitable economic downturn and cited the unprecedented $1 billion the administration just put into the city’s general reserve fund. During the previous administration, the fund typically contained $300 million, Capital New York reported.

“Neither we nor the administration has forecasted a downturn,” Turetsky said. “We both forecast slower job growth than we’ve seen in the last couple of years but we still see a growing economy. It’s a risk because there hasn’t been this long of an expansion in forever. But there’s always risks in any forecast.”

At a CBC event in May, New York City Budget Director Dean Fuleihan said that the city has set aside funds in three different reserves. “We have been extremely cautious and realistic in our projections,” he said. “Even though we are in a growing economy, we will continue to come back and do more and more on savings.”

Meanwhile, the City Council has been trying to further increase transparency by calling for more units of appropriation within the budget, that is more line items with specifics of which programs are being funded. Council Member Julissa Ferreras, who chairs the Council’s finance committee and helps lead budget negotiations with the mayor’s administration, has had several public exchanges with Fuleihan where she has insisted on greater transparency via units of appropriation. In announcing the final budget, Ferreras trumpeted increased specificity, but said there is more work to be done.

While Bardin feels that the spending plan is largely transparent, she added, “There are certain items that are difficult to track within the budget.”

In an effort at greater transparency, we break down the budget below. First, it is important to note that the “city budget” most refer to and that we have discussed thus far is the expense budget, for operational, programmatic, and personnel expenses, which for fiscal 2016 is $78.6 billion. This includes money to be spent by the City Council and by City Council members in their districts. There is also the city’s capital budget, money dedicated for construction and infrastructure spending. In this big bucket there is also spending by the Council and individual members.

Expense Budget— $78.6B
The expense budget funds city government services. All city agencies, the City Council, and the borough presidents get their operational funding from the expense budget, as do the Comptroller and the Public Advocate; including funding for salaries and pensions of city employees and other operational costs of government offices such as rent, utilities, and office supplies. 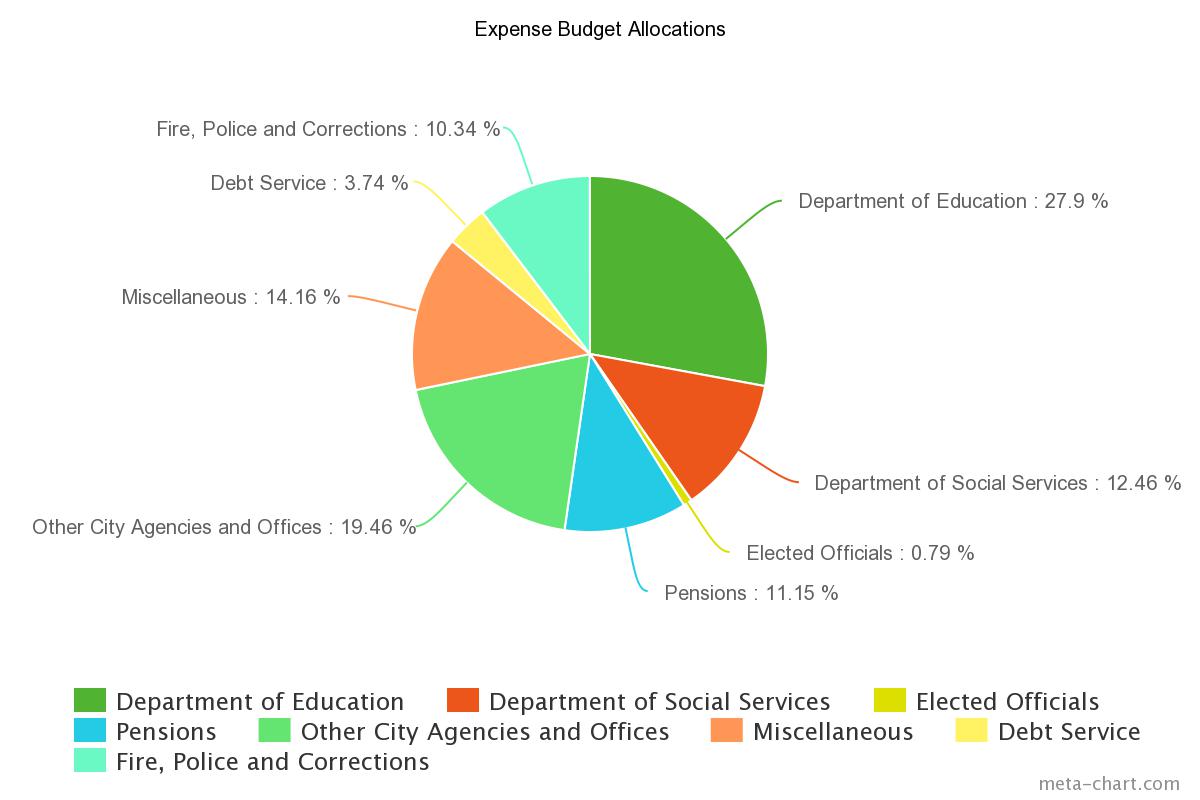 Schedule C- $52.6 million
City Council discretionary funds make up a relatively small portion of the expense budget, but are traditionally among the most scrutinized pieces of the budget, and released in a document called “Schedule C.” Council members are allocated discretionary funds to give to nonprofit organizations that benefit their district and constituents.

In May 2014, reforms were made in an attempt to make the distribution of these funds more equal and transparent— the allocation was previously controlled at the whims of the Speaker, who could use the discretionary funds to reward allies and punish enemies. Reforms ushered in under new Speaker Melissa Mark-Viverito and other members brought a uniform system, with each Council member now receiving a base of $400,000, and an additional $25,000, $50,000, $75,000, or $100,000 based on the poverty level of their district. Council members receiving the maximum amount of $500,000 include Maria del Carmen Arroyo, Fernando Cabrera, Vanessa Gibson, and Ritchie Torres— all from the Bronx— as well as Mark-Viverito, who represents East Harlem and part of the Bronx.

As Speaker, Mark-Viverito also has access to an additional $16 million, for allocating what is known as the ‘Speaker’s List,’ money to go to organizations and initiatives at the Speaker’s discretion and at the request of Council members.

This year, the Speaker’s List heavily funds projects in Brooklyn, including allocating $340,000 to the Brooklyn Chamber of Commerce; $255,000 to Brooklyn Legal Services Corporation; and $250,000 to El Puente Williamsburg, a community human rights organization. Eric Adams, the Brooklyn Borough President, was also the only borough president who received additional funding— $100,000— from the Council for employee compensation. Adams’ office also received $100,000 last year for “personal services enhancement,” along with that of Manhattan Borough President Gale Brewer. Though some have said Brooklyn has long been underfunded despite being the most populous borough, others point to political favors or special needs as the borough booms.

Two organizations that see the most funding by the Council are Catholic Charities Community Services, which is set to receive $666,000 ($130,000 from the Speaker herself, using both funds allocated to her as a council member and the Speaker’s List) and the Hispanic Federation ($166,000 funded by the Speaker).

Last year, 24 Council Members chose to implement the 2014-2015 cycle of participatory budgeting, a process in which district constituents are allowed to propose projects and vote on how a portion of the capital funds their council member has control over should be used ($1-2 million per district).

Additionally, the five borough presidents are given the power by the City Charter to allot portions (this year 5 percent) of the city’s capital budget to fund construction projects or improvements to infrastructure. Those portions are then allocated to city agencies or nonprofit organizations. In late June, Manhattan Borough President Gale Brewer announced her office would allocate $30 million in capital grants to projects including playground and athletic field restorations at public parks and tech improvements at CUNY and SUNY campuses.

Queens Borough President Melinda Katz announced that she would allocate $200,000 of her capital funds to purchase and install real-time bus countdown clocks at the borough’s busiest bus stops.

“Capital grants give us the opportunity to both fix nagging problems and invest in our neighborhoods’ future,” Brewer said in a statement sent to press. “Whether we’re fixing the roof at a branch library, renovating a playground, or building out a new computer lab at a local school, these capital grants are going to strengthen our communities and improve people’s lives.”