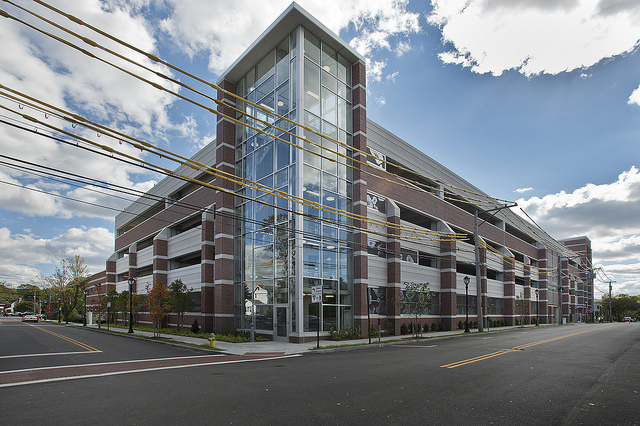 At an Urban Land Institute conference last week, two panels of transportation experts – one from the public sector, the other from the private sector – discussed the issues plaguing tri-state transportation systems and the potential of public-private partnerships to address them.

With transportation infrastructure, a public-private partnership, or P3 agreement, is used most often in a design-build contract - design-build is a method of project-delivery in which a private contractor wins a bid to design and construct a project. Ongoing regional public-private infrastructure projects include the construction of a new Port Authority Bus Terminal and an MTA project to build a Long Island Rail Road station beneath Grand Central Terminal (known as East Side Access).

Organized by the Urban Land Institute’s New York, New Jersey and Westchester/Fairfield chapters, the forum was hosted at Shearman & Sterling’s East Midtown headquarters, drawing a crowd of around one hundred.

During the panel of current and former public officials, moderated by CityLab New York bureau chief Eric Jaffe, the speakers disagreed on the role of public-private partnerships in terms of their potential for improving transportation infrastructure.

“The bigger you get, when you have many more stakeholders, many more local zoning laws, then it becomes more difficult,” Steve Santoro, New Jersey Transit's assistant executive director of capital planning, said of expansive P3 projects.

All agreed, however, that area transportation infrastructure is in a state of crisis.

“The term 'transportation Armageddon' has been used,” Jaffe said, referring to Senator Chuck Schumer's remarks about the potential results of the damaged Hudson River tunnels. If the existing New York-to-New Jersey tunnels close - a plausible scenario given their age, deterioration and the fact that they have reached current capacity - it would be disastrous for commuters and the regional economy.

In remarks after the panel, Drew Galloway, Amtrak’s Northeast Corridor chief of planning and performance expressed openness to working with a private sector contractor on the Gateway Project, a proposed high-speed rail corridor planned to help solve a potential crisis with the tunnels, which are used by NJTransit and Amtrak and bring many commuters into New York City.

“We absolutely intend to consider [public-private partnerships] and will welcome the proposals as it goes forward,” Galloway told Politico New York.

After the conference’s 15-minute networking break, the private sector panel convened to discuss the best P3 business practices globally, as well as the potential hazards and benefits of P3s.

“You have competition among entities of the private sector to come up with the best and most cost-effective design,” Karen Hedlund, national P3 advisor for Parsons Brinckerhoff, said at the panel, which was moderated by Urban Land Institute's senior vice president, Rachel MacCleery.

For underfunded tri-state transportation agencies, design-build can be an attractive method of cutting project costs. As Mike Parker, of Ernst & Young Infrastructure Advisors, LLC, pointed out, the Port Authority of New York and New Jersey estimated that it saved ten percent by using a P3 for the Goethals Bridge reconstruction versus a public plan.

In the case of Amtrak’s Northeast Corridor, Hedlund explained, its dire need for infrastructure repair may repel potential private partners.

“Would they be willing to accept the cost of bringing the Northeast Corridor up to a state-of-good-repair?” Hedlund asked. “It's a much more complicated question than sometimes some politicians would like you to believe.”

Certainly, the MTA needs faster project delivery - a recent report by the Citizens Budget Commission (CBC), a nonpartisan watchdog group, estimated that MTA repair and upgrade projects will be finished by 2067 at their current rate. The Second Avenue Subway extension is notoriously behind schedule and beyond budget.

But though public-private partnerships are recommended for MTA repair projects, the CBC report warns that a “P3 can leave public agencies at risk when private parties fail to perform adequately,” as they did in the early 2000s with a London Underground repair project.

“The London experience showed that there’s some problems with P3s that dealt with a lot of maintaining existing assets and bringing existing infrastructure up to a state-of-good-repair,” Jamison Dague, the report’s author, told Gotham Gazette. “And that’s not to say that you can’t have a P3 that does those things successfully, but that was one challenge that they saw there.”

Meanwhile, design-build contracts for New York infrastructure, Dague added, have proven successful in the past. The newly approved (and controversial) MTA five-year capital plan was reduced by billions of dollars after the agency accounted for increased use of design-build and other cost-saving strategies.

From a policy standpoint, measures can be taken to prevent private sector malfeasance when engaging companies in major infrastructure projects. In his remarks, Galloway emphasized the need for transportation officials to independently estimate a project’s cost before private sector involvement.

“Otherwise, they will price their own investment in such a way to cover that risk,” Galloway said. “And you very quickly lose some of the advantages that you would otherwise see in a public-private partnership.”

Transportation officials and others have suggested oversight mechanisms as a means of preventing similar problems before. Independent evaluation of projects before private-sector involvement was recommended by New York State Comptroller Thomas DiNapoli in a 2013 report, which also calls for the creation of an oversight entity for public-partnership agreements and other changes to the state's P3 policies.

Jaffe mentioned the ongoing concern: “The fear is always that in the long run, the public will end up paying more than they said they would pay up front.”