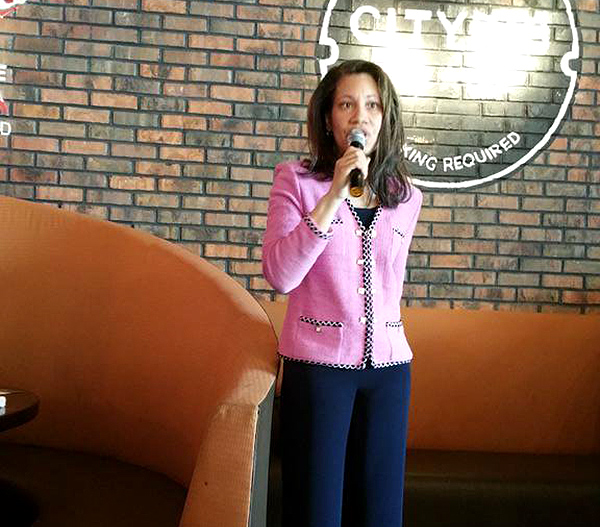 "It's an exciting time to be joining the City Planning Commission," City Council Member Brad Lander said Tuesday to Hope Knight, a mayoral nominee to the commission at the nexus of controversial housing-related policy being pursued by the de Blasio administration.

"It's a tough time to be joining," Knight said during her appearance in front of Lander's committee, which is tasked with vetting potential appointees to several commissions. Knight, who is all but sure to be approved Wednesday by the Rules, Elections, and Privileges Committee, then the full City Council, will fill a vacant seat on the 13-member City Planning Commission, which plays a key role in city land use decisions.

The commission is about to hold a major public hearing on de Blasio's zoning plans, then make recommendations for changes before the plans go to the City Council for hearings and, likely, further tweaks before a vote. The plans, which are aimed at spurring more affordable housing development and improving neighborhoods, have received major pushback from local community boards, advocacy groups, and borough presidents. They have also received some support from labor unions, advocacy groups, and others.

Acknowledging the intense circumstances, Knight said of land use planning, "the issue is so important to this city, it's critical to the future. There is this affordability crisis that we've got here. Our local land-use tools are available to us to help address this. And so, I hope that I am able to bring [my] community planning and economic development background and perspective to this position and this process, and be able to consider these issues in a very thoughtful way."

Knight is currently the CEO and President of the Greater Jamaica Development Corporation, a position she will retain while creating the necessary "firewall" so that she does not deal with issues before the city, she said Tuesday. Knight explained that she has received guidance from the city Conflicts of Interest Board and will follow it. Previously, Knight was Chief Operating Officer of the Upper Manhattan Empowerment Zone for about 12 years after several positions in finance.

In her pre-hearing questionnaire, Knight wrote to the City Council that the City Planning Commission "must be sensitive to the needs of communities and establish many channels of communication."

Knight also wrote that "The strategy of zoning changes to allow residential buildings with additional density, provided that affordable housing is included, is one of the few land use tools that the City has access to in order to greater leverage the development of more affordable housing units."

While the City Planning Commission does much more than zoning amendments, that is the focus of the work right now.

With Knight there to observe, the City Planning Commission will hold a much-anticipated public hearing Wednesday on two proposals by Mayor Bill de Blasio that are essential pieces of his affordable housing plan. Both proposals are changes to the city's land use rules by way of zoning language and have been the source of a great deal of recent debate.

Many community boards and all five borough boards have voted against de Blasio's Mandatory Inclusionary Zoning and Zoning for Quality and Affordability proposals. These votes are only advisory, though, and the future of the plans, known as MIH and ZQA, will come down to a City Council vote in early-to-mid 2016. Reasons for opposition and desired tweaks to the plans vary by borough and neighborhood, but some include thresholds for affordability, changes in parking requirements, and increased density or allowable building heights.

Between the advice of the community and borough boards and the City Council getting its shot at tweaking the plans, the City Planning Commission will issue its recommended changes. These recommendations will be based, in part, on Wednesday's hearing, which is expected to be long and contentious.

On Tuesday, Knight appeared to grasp what she is signing up for, discussing her long career in community planning and advocacy, as well as her outlook on land use decision-making. Lander and his fellow committee members were impressed by Knight's candidacy and appear ready to vote her through to the full Council for approval.

Knight will join six other mayoral appointees on the City Planning Commission, as well as one appointee from each borough president, and one appointee by the public advocate. The commission is under the leadership of Chair Carl Weisbrod, who is also the commissioner of the city's Department of City Planning and serves at the discretion of the mayor. Other commission members serve alternating five-year terms. Knight will fill the seat vacated by Bomee Jung, who took a position within the de Blasio administration earlier this year, and will serve the rest of Jung's term, until June 30, 2018. She can be reappointed after that.

According to the City Council, the City Charter says that members of the City Planning Commission "are to be chosen for their independence, integrity, and civic commitment."

On Tuesday, Council members including Lander, Dan Garodnick, and Margaret Chin, praised Knight for her dedication to community planning and neighborhood advocacy. Council members also wanted to make sure that Knight would hear community feedback around land use policy. Council Member Steven Matteo asked Knight how much weight she puts on community concerns. "I would put tremendous weight on what the community has to say," Knight responded of her approach if she is indeed approved, adding that she has been "at the table" representing communities in land use negotiatons in the past.

Repeatedly citing the city's "affordability crisis," Knight also explained that she understands fear of gentrification and that the city must be cognizant of an "aging population."

Knight was not questioned about her independence from de Blasio, who nominated her to the commission after his appointments office identified her as a strong candidate.

"[I]n order to create more affordable units," Knight said, "we have to look at various land-use tools to implement the possibility of creating units. So, I think that MIH, ZQA, they're all components of the mayor's...housing plan and will have to be more greatly considered to support the growth of new housing."

During a Tuesday appearance on WNYC's The Brian Lehrer Show, de Blasio's planning chief, Weisbrod, said of Wednesday's City Planning Commission hearing and the zoning plans, "We expect to hear a lot of comments on all sides of this issue." The controversy around MIH and ZQA, he said, "Won't get fully resolved until the City Council decides this early next year."