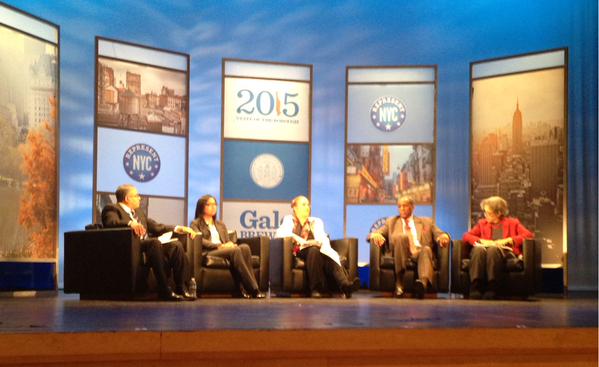 MANHATTAN - Gale Brewer spent little time behind a lectern at her first official "state of the borough" event on Sunday. Instead, the afternoon kicked off with a Broadway musical number and ended with a wide-ranging conversation about the complex problems facing Manhattanites.

"Our event is a different 'state of,' because we're listening to what New Yorkers have to say," Borough President Brewer said to a crowd of about 675 at Columbia University's Lerner Hall on Sunday.

To be more inclusive, Brewer shared the stage with four "thought leaders" for a discussion on Manhattan issues. The event was livestreamed on the Manhattan Neighborhood Network, questions were taken from Twitter, and elected officials shared their visions for the borough's future in six-second Vine videos.

"Manhattan is looking up, because of the 'gale-force' winds known as Gale Brewer," she said.

Well-known for her accessibility, Brewer often gives out her personal cell phone number, email, and home address to constituents. On Sunday, she made sure everyone knew how active she and her staff have been.

"Over the last year, we've waded deep into the prose," she said, in reference to the famous quote from the late former Governor Mario Cuomo.

In 2014, the borough president's office helped more than 1,000 people through various constituent services, made a large number of appointments to different local boards, and co-sponsored 31 pieces of legislation in the City Council, the audience was told. Three of those bills were passed and a resolution to allow 16- and 17-year-olds on community boards became state law. As of Jan. 30, more than 30 newly eligible teens have applied to become community board members, Brewer is proud to tout.

Overall, the event focused more on big picture ideas than concrete plans for the year ahead. Manhattan is known worldwide as a business and cultural center, but Brewer emphasized that it's also home to 1.6 million people. In recent years, many small businesses and longtime residents have been priced out. In keeping with Mayor de Blasio's State of the City agenda, much of the conversation centered around income inequality and affordable housing.

"If we don't have affordable housing in this city we won't have a city anymore," said Senator Charles Schumer.

On the education front, Carl McCall, current chair of the SUNY Board of Trustees and former state comptroller, said many students from New York's high schools aren't prepared for college. He said SUNY currently spends more than $80 million a year on remediation and stressed the importance of STEM education, as well as a new teacher evaluation system.

"We've got to evaluate people and we've got to compensate people based on their ability to do the job," he said, touching on an issue far from the purview of the borough president, but of concern to many Manhattanites.

Unlike the mayor in his State of the City speech, Brewer brought up police-community relations at her event. Former Borough President Ruth Messinger suggested incentivizing good police behavior similar to the way bus drivers were rewarded for their kindness toward passengers with wheelchairs starting in the '80s.

"We need a police department that recognizes skilled community relations as a basis for reward and promotions," Messinger said.

Many of these issues extend far beyond Manhattan and the limited budget and powers of a borough president. The position does offer a platform, though, and Brewer's long tenure in city government has earned her a powerful group of allies, many of whom were in the audience.

Brewer's colleagues, including one esteemed guest, had high praise for her work so far.

Though unlike when Dinkins was Manhattan's borough president in the '80s, the job now has less clout.

"It is a fact that the borough president today has to work awfully hard using the bully pulpit and competent staff to come up with ideas they hope they can sell to people who have the power," he said.

Based on her track record in city government, if anyone can make the most of the job it's Gale Brewer. She promised more details for 2015 as the city budget begins to take shape in the coming months.