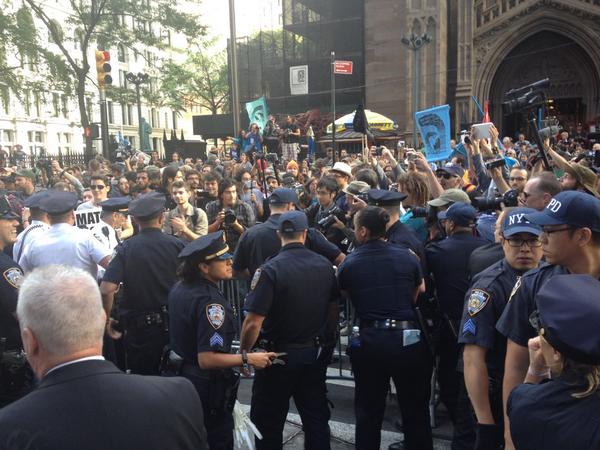 For over a decade the NYCLU and others have criticized the NYPD for the way it handles demonstrations. The NYPD's practices have been out of step with international human rights standards and widely accepted best practices. In too many cases the department has relied on a strategy of micro-management backed up by excessive force and in the worst cases has preemptively disrupted protests before they even start, resulting in a cost of tens of millions in legal settlements and unnecessary overtime. The policing of Sunday's People's Climate March and Monday's Flood Wall Street action showed encouraging signs of a break in that approach as police took a less restrictive and more flexible and tolerant posture, reducing the use of barricades and allowing protestors to peacefully occupy lower Broadway for much of Monday.

In 2003, I coauthored a report with the NYCLU following the NYPD's botched handling of the 2003 anti-Iraq War demonstration on Manhattan's East Side. Hundreds of thousands of peaceful protestors were denied the right to protest because of denials of permits, restrictions on access to the demonstration area, and an oppressive overuse of metal barricades to pen in demonstrators.

During the Republican National Convention in 2004, the NYPD relaxed some of its worst practices in terms of access and penning following federal litigation, but continued to needlessly over-police most demonstrations. Another report I co-authored with the NYCLU documented that in a number of instances the NYPD relied on preemptive tactics, including the surveillance of demonstrators, alarmist statements about protestors made to the media, and the outright unlawful arrest of almost 2,000 people before they had even begun demonstrating, much less broken the law.

During the Occupy protests in 2011, the NYPD frequently employed excessive force against demonstrators. People who marched in the street were immediately subjected to pepper spray, punches, mass arrest, and even being dragged by the hair. Even those on the sidewalk or public plazas were subjected to constant harassment and arrest for infractions like using chalk on the sidewalk or speaking into a megaphone.

In several papers I have outlined how these tactics represent a shift away from the widely practiced "negotiated management" style of policing that is flexible and tolerant in an effort to avoid escalations of conflict and violence to the twin strategies of Command and Control and the Miami Model. The former, based in large part on the Broken Windows theory and developed early in the Giuliani administration, attempts to control demonstrators through massive police deployments, extensive use of metal barricades to control people's access to demonstrations and their movement within them, tight limits on the issuing of permits--often based on political calculations, and a zero tolerance outlook towards even minor violations of permits or the law.

The Miami Model is even more restrictive. For demonstrators who are perceived to be a threat to public order, the police regularly engage in preemptive arrests, disruptive surveillance practices, the deployment of militarized riot control techniques and even the use of agents provocateur. This model, developed in Miami by former NYPD chief John Timmony, was a response to the disruptive protest at the World Trade Organization in Seattle in 1999. In 2003 the Miami Police used military grade riot control weapons on peaceful demonstrators, denied thousands of union members access to the protest area, and denigrated protestors in the media prior to the demonstrations.

On Sunday, there was the possibility of a repeat of 2003. March organizers had been denied a permit to proceed through Times Square (so the NYPD could maintain its apolitical character?) and couldn't get a commitment about reduced use of pens and ease of access to the staging area. In the end, the police did in fact dial back many of its micromanagement strategies, though not completely. Access to the assembly areas was mostly pretty good with only some people being told to walk north to get to Central Park West. Once there, there were protest pens—unlike other major cities around the world hosting demonstrations that day --but movement in, out, and between them, was possible in most cases. And, while parts of the route, especially near Times Square, were heavily barricaded, the bulk of 6th Ave was not. This was a major departure from past demonstrations and was greatly welcomed by demonstrators who were able to interact with passersby, grab something to eat, or go to the bathroom with relative ease.

The real changes, however, were on Monday. Organizers of the Flood Wall Street action had pledged to disrupt business as usual in lower Manhattan through mass civil disobedience and direct action. A couple of thousand people showed up and at around 11:30 a.m. many sat down next the bull sculpture in the middle of Broadway just above Bowling Green. They were allowed to occupy that space for much of the afternoon. The police made no effort to arrest them, disperse them, or even to isolate them from onlookers. This was a major departure from past practice. Similar efforts in recent years have been met with widespread use of force to push demonstrators onto sidewalks along with often random arrests to intimidate others.

By around 3:30 PM many of those sitting in dispersed, but several hundred marched north towards Wall Street. Police made little to no effort to contain them until demonstrators attempted to breach the barriers blocking access to Wall Street. At that point a few people were subjected to pepper spray and punches as they wrestled with police over the barricades there--a not unreasonable use of force given the circumstances.

Even after that violent confrontation, police allowed people to occupy Broadway for another 3 hours before finally warning, then arresting the remaining 100 protestors in a calm, deliberate, and methodical manner.

While some may criticize the mayor for tying the NYPD's hands, in fact this is an example of the kind of more tolerant and flexible policing the city needs as an antidote to 20 years of aggressive zero tolerance approaches. The First Amendment scored a major victory this week.

***
Alex S. Vitale is associate professor of sociology at Brooklyn College and author of City of Disorder: How the Quality of Life Campaign Transformed New York Politics. He is senior policy adviser to hte Police Reform Organizing Project and serves on the New York State Advisory Committee to the US Civil Rights Commission. You can follow him on Twitter at @avitale.