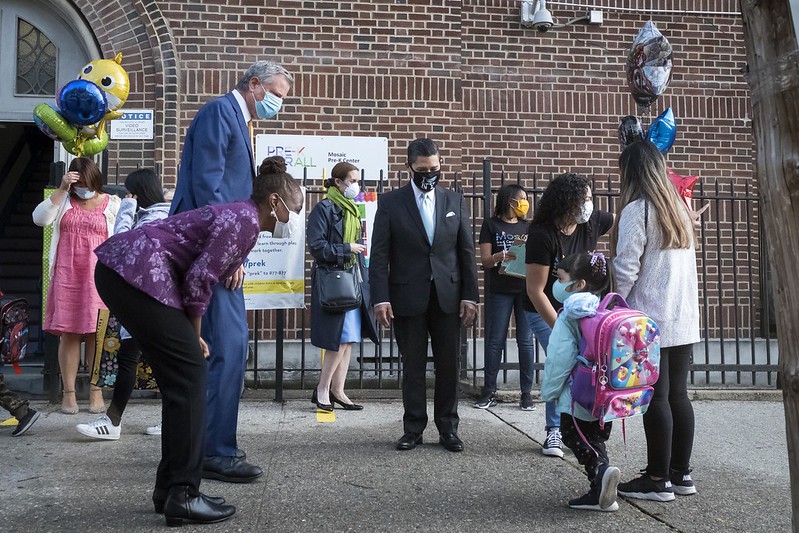 Last week, Mayor de Blasio and Schools Chancellor Carranza announced that they will administer the controversial and problematic test for admissions to “gifted and talented” classes this spring, for perhaps a final year. Then:

“We will spend the next year engaging communities around what kind of programming they would like to see that is more inclusive, enriching, and truly supports the needs of academically advanced and diversely talented students at a more appropriate age… We will also engage communities around how best to integrate enriched learning opportunities to more students, so that every student – regardless of a label or a class that they are in – can access rigorous learning that is tailored to their needs and fosters their creativity, passion, and strengths.”

Yet the question arises as to why they will continue to give these exams to children as young as four years old at all. They are exams that few respected researchers believe are either valid or reliable. Why not end the practice now, especially given the risks and considerable cost of administering this test during a pandemic?

We have posted many critiques of New York City's gifted program over the years on our NYC Public School Parents blog, including this one by esteemed education leader Debbie Meier in 2007, when Chancellor Joel Klein first instituted a standardized, high-stakes testing process for admissions to these classes in the supposed name of "equity."

As Meier wrote, “They are using two instruments we know for a fact provide racially biased results--it's the data that the canards about racial inferiority are based on and comes with a history of bias. Both class and race. Furthermore, we know that psychometricians have unanimously warned us for years about the lack of reliability of standardized tests for children under 7.”

The admissions outcome is clearly racially- and economically-biased, as nearly half of all students who take the test in the wealthiest part of Manhattan, District 2, score as “gifted” (meaning at 90th percentile) while very few score that high in the poorer neighborhoods of Brooklyn or the Bronx. Some parents pay up to $400 an hour for their four-year-old children to take test prep classes.

About 29,000 children took the gifted test last year, and about 3,600 got offers for seats in gifted classes. Currently, according to the New York Post, Asian students account for 43% of these students, followed by white students at 36%, Hispanic students 8%, and Black students 6%.

The best article on the unreliability of these tests was published back in 2010 in New York Magazine, which cited a peer-reviewed study showing that most children who are identified as “gifted” by scoring in the top percentiles on ability and achievement tests no longer do a year or two later.

The Department of Education is proposing to renew its testing contract with Pearson, which produces the exam, through Oct. 31, 2021 and at a cost of just under $1.7 million. And that amount doesn’t include the substantial, but undisclosed, cost that the DOE will pay for teachers to give the test one-on-one, which takes about an hour for each child.

Doesn’t the city have anything better to do with nearly $1.7 million – in the midst of an economic crisis and looming budget cuts to schools? Especially when staffing in schools is so constrained that online class sizes have ballooned to 40 or 60 students or more?

See also the negative record of Pearson as reported in the DOE contract documents, including many documented errors in administration and scoring.

Although the list of Pearson misdeeds the DOE offers is lengthy, it omits most of the company’s past performance errors in schools nationwide, and even in New York.

The DOE list leaves out the most famous scandal of the absurd pineapple passage on the 8th grade state reading exams in 2012, which became a symbol of the risible low quality of standardized exams. The nonsensical pineapple passage had been included year after year in Pearson exams, in at least six states and many districts, leading to widespread protest from students and teachers until we called it out.

The DOE list also unaccountably omits how in 2013, the company mis-scored the results of the gifted exams for thousands of New York City children, after which the DOE said it was reconsidering whether to renew its Pearson contract.

It doesn’t mention how in 2013, Pearson agreed to pay $77 million to settle a case with the New York Attorney General’s office, for improperly taking New York education officials on junkets and developing curriculum materials through its Foundation, which were then marketed and sold at a profit by the company.

The current version of the DOE guide to admissions to “gifted and talented” classes says on page 3: “Why Take the G&T Test? There is no harm in having your child tested.” Really?

It goes on: “The results of the G&T test are confidential to you and will not be shared with current or future schools—these scores are used only to determine eligibility to apply for G&T programs.”

However, data security at Pearson is known to be weak.

The DOE list also omits how, in 2018, there was a huge breach that included personal student data collected through the Pearson AIMSWeb assessments. This breach, which affected hundreds of thousands of students nationwide, including many in New York State, occurred in November 2018. The FBI discovered and notified Pearson about the breach in March 2019, though the company unaccountably failed to inform any district about the breach until the end of July 2019, almost nine months after it occurred. In several of these districts, their contracts with Pearson for AIMSWeb had lapsed years before, but the company had held on to the data.

Contrary to the language and intent of the New York State student privacy law, Education Law Section 2-D, the DOE chief privacy officer has told me they do not intend to ask any company to delete data they hold for New York City students until all their contracts with that company have ended; DOE has several outstanding contracts beyond the G&T test with Pearson for years to come.

The DOE’s incomplete account of Pearson’s problematic record includes several allegations of discrimination, including a still-open investigation of the company by the Equal Employment Opportunity Commission, based on employee complaints of discrimination on the basis of age, sex, disability, and race.

The contract with Pearson for the gifted exam is to be voted upon on January 27 by the New York City Panel for Educational Policy (those who would like to speak on the proposal can register here). Also on the agenda are changes in the PEP bylaws and chancellor’s regulations related to Community Education Council and Citywide Council elections.

Let’s hope the PEP members vote to reject the contract for this unreliable, unfair, expensive, and racially-biased exam, which should have been cancelled years ago, produced by a company with a deplorable record.