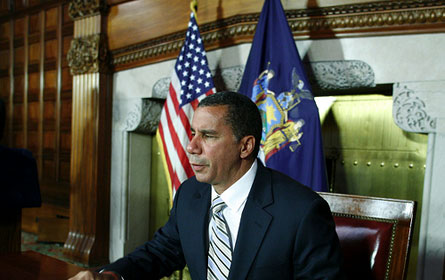 That is the question most asked in Albany these days.

That's probably the second most frequent.

The answer to those questions isn't as straightforward as anyone might hope.

It has been a back and forth couple of days in the capital as legislators and the governor battled over the budget, using obscure rules and good old-fashioned vetoesto one up each other.

Don't imagine for one second the battle is over. Bills may have been passed, but deals are still being made and the fallout for the city remains obscure.

The legislature passed its budget bills -- making the need for more emergency budget extenders obsolete. There will be no state shutdown. The legislature made a number of restorations to Gov. David Paterson's budget, but the governor has sworn to use his veto stamp almost 7,000 times to stop all increased spending. The legislature could override -- if the Senate had the votes. But Senate Republicans would need to back the Democrats in the effort, and they have told Democrats not to count on them. Meanwhile, the governor's office and the legislature continue to negotiate over the revenue package.

Rather than scrambling to negotiate a three-way deal, Assembly Speaker Sheldon Silver and Democratic Conference Leader John Sampson hashed out a deal between themselves -- leaving Paterson on the sidelines. Knowing that governor had some support among their members, the legislative leaders invoked a never-before-used rule that allowed them to reject Paterson's budget extenders. This time they had a funding structure of their own to pass to make sure the state government didn't shutdown.

The legislature managed to pass its budget plan on Monday after substantial effort on Sampson's part to get his conference to vote for it -- but Paterson immediately promised to veto every line of spending the legislature added to his own budget plan, and he has begun to make good on those 6,900 vetoes.

And the legislature has yet to pass its revenue plan. If and when it does, Paterson could veto that plan, sending lawmakers scrambling to reach a new revenue deal.

Legislators have started reaching out to Paterson to restart budget talks. So far, Paterson seems resistant. "I am doing the vetoes. As far as I am concerned, this budget process is over," Paterson told the Associated Press on Tuesday.

The legislature's plan was, at least in some respects, kinder to the city than the governor's. Paterson vetoed the legislature's restoration of $419 million in education aid -- $177 million of which would have gone to city schools.

"I never take any joy in vetoing education money, health care, services for the poor and the indigent," Paterson said at a press conference on Monday night. "It breaks my heart to do this. The only reason I am doing this is because I think that otherwise we are proverbially kicking the can down the road and creating a greater problem."

Education advocates and representatives from the Assembly and Senate say Paterson's veto and the cut in funding will increase class sizes and reduce educational opportunities.

"In high needs school districts across the state, this compromise budget offers a critical margin of protection to the quality of education," wrote Billy Easton of The Alliance for Quality Education. "The governor's veto, if it stands, will hurt the neediest students in the state the most."

Thanks to earlier budget extenders, New York City also is set to lose $302 million in state Aid and Incentives to Municipalities funding.

The state is now left with a mess of a budget that even its authors don't fully grasp. Republican Sen. John DeFrancisco asked Senate Finance Chair Carl Kruger for the size of the budget -- how much spending it includes. "We do not have a number," Kruger replied. If you don't know the total amount of spending, how do you know this budget is balanced?" DeFrancisco demanded.

Eventually, Democrats handed out a memo detailing their budget deal. The total size of the budget is $135.72 billion, slightly larger than Paterson's executive budget of $135.65 billion.

Morgan Hook, spokesman for Gov. David Paterson, said the governor's office expects the budget the legislature passed is around $400 million out of balance, and that number could grow depending on how much funding the federal government delivers in its annual Medicaid payment. Washington coud very well make a devastating cut in the $1.6 billion the state received previously.

If the state does not get the money, Paterson has promised to recall legislators this fall --at the height of election season.

The legislature abandoned a number of revenue raisers in Paterson's budget, including a tax on the syrup used in sugary drinks, legalizing mixed martial arts and allowing the sale of wine in grocery stores. "We need to find other sources of revenue," said division of budget spokesman Erik Kriss. "Allowing wine in grocery stores would have given us $150 million in FY 2010-2011. They didn't do mixed martial arts, and they didn't take into account all the spending they added."

Instead, legislators reactivated a sales tax on clothing and footwear retailing for under $110. That measure is expected to raise $330 million. Legislators railed against Paterson's "sugar tax" saying it would hurt New York families by raising their grocery bills. But lawmakers were reluctant to explain how their sales tax on cheap clothing could possibly benefit hard-working New Yorkers.

Originally the legislature proposed limiting the tax deduction for charitable contributions by the wealthiest New Yorkers, allowing those who make over $10 million a year to deduct 25 percent of their charitable donations on their tax returns, down from 50 percent. The rich, especially Mayor Michael Bloomberg who makes substantial charitable donations, have assailed this measure, saying it will drive the wealthy from the state.

"If one half of one percent of the people who pay the highest taxes left this state, our income tax would be cut in half," Bloomberg said.

As a result of the backlash, the legislature amended the legislation to allow New York City to opt out of the measure, since the city has its own personal income tax.

Charitable organizations say the reduced deduction will be extremely damaging to them. "The millions that Albany hopes to gain by this tax hike won't go far to help a state whose operating deficit numbers in the billions," writes Scott Walter on philanthropydaily.com, "but those millions can mean life and death to charities and those they serve."

The bill would reduce the income tax reduction New York City residents can claim to the first $100,000 of their income. That is estimated to raise $120 million.

Video lottery terminals hours will be increased, and more of the income from them will go to the state opposed to the operators of the terminals. That measure is expected to raise $45 million.

Paterson does not have line item veto power over the revenue package and wants more revenue raisers, not fewer. Negotiations between the legislature and Paterson are reportedly ongoing and it isn't clear when the legislature will actually vote on the bill.

However, if the governor does not get what he wants he could veto the entire package and send the legislature back to the negotiating table to find more revenue sources. It would be a power play of epic proportions. "It’s a take it or leave it proposition," commented a Paterson spokesperson, who said she expected Paterson would evaluate the legislation after it passes.

"I can’t even get into the idea of vetoing that bill," said Kriss.

Silver said he doubts Paterson will veto the bill or that there will be major changes to the revenue stream. "I don't envision any great talks about changing it, as far as that goes," Silver said. "I would be surprised. The revenue bill is exactly the same as his bill that he has in that so-called emergency bill with the exception of wine in grocery stores." And yet members of the Senate Democratic conference say they are holding out on passing the revenue measure to come to terms with the Assembly on Paterson's plan to allow SUNY and CUNY to set raise their own tuition without state approval and a plan to deal with the possible lack of Federal Medicaid funding.

An Issue of Counting

Sen. Eric Schneiderman's bill that would count inmates as living in their hometowns rather than at the prison where they are incarcerated is also part of the legislature's revenue bill. It could have major consequences on the future of New York State politics.

The majority of the prisoners now counted as residing in upstate prisons are from the five boroughs. Those inmates now would be counted for redistricting purposes as living in New York City -- not upstate -- severely reducing the number of upstate districts and creating more districts in the city. Last year the legislature passed Rockefeller Drug Law reform in the budget.

In the end the budget battle is not over. There is talk that negotiations could continue after the July 4 holiday because legislators support Paterson's plan to allow SUNY and CUNY to raise their tuition every year and other measures. Lawmakers could conceivably make deals that would see a return of education funds, and Paterson could get revenue raisers he wants like the tax on sugary drinks. It's Albany, who really knows?