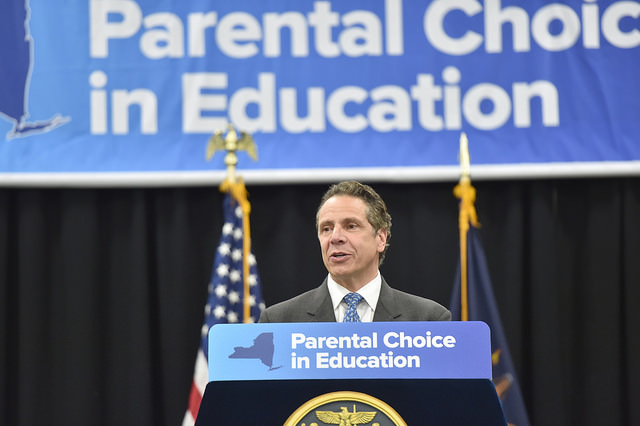 The past several months have been one of the most tumultuous periods in New York State's educational history, culminating several years of false starts and disarray in education policy. It's not without precedent, though, and history has valuable lessons for New York today.

Disillusionment and disavowal of recent educational practices
In December, President Barack Obama signed the Every Student Succeeds Act, replacing the 15-year old No Child Left Behind Act and sweeping away its emphasis on standardized tests and punitive approach to failing schools. The new law returns power to the states and dilutes the federal government's power to impose educational standards. That will loosen the hold of federal requirements on New York's educational policy.

Also in December, Governor Andrew Cuomo announced and endorsed the report of his "Common Core Task Force," which had been charged with evaluating the rollout of Common Core educational standards, which the federal government had supported. The task force recommended adopting new, locally-driven New York State standards and, as the governor noted, "greatly reducing testing and testing anxiety for our students. The Common Core was supposed to ensure all of our children had the education they needed to be college and career-ready – but it actually caused confusion and anxiety. That ends now."

At the same time, the Board of Regents approved a four-year moratorium on using student scores on state standardized tests as part of the teacher evaluation system, something teachers had protested (local tests will still be used, though). The Regents' suspension of the policy is in line with another recommendation of the governor's Common Core task force. The governor had also endorsed use of student test scores in teacher evaluation, a position he has also now abandoned.

The Regents adopted the Common Core some years ago and required its use in the schools without providing the necessary implementation materials or training for teachers, and mandated exams on material that had not been fully covered in the classroom. Teachers protested that the process was too rushed and opposed using the test scores in their own job evaluations. Thousands of parents joined an "opt out" movement by refusing to let their children take the exams. The embattled state commissioner of education, John King,  who oversaw the rushed rollout, left for a post in Washington, D.C. His successor, MaryEllen Elia, has promised a more thoughtful and responsive approach.

New York's per-pupil spending is among the highest in the nation but there are constant reports and press stories that our graduates are not adequately prepared for the workforce or college.

In the meantime, over the past several years New York has established a second network of publically-funded schools called charter schools, paralleling and often competing with its traditional public schools, with mixed results.

After years of disarray, we are (or should be) at a turning point. It is time for a fresh look at education policy in New York.

Gov. Cuomo, in his State of the State address on Jan. 13, proposed changes, but relatively limited ones. Referring to criticism in his common core task force's report of "common core curriculum implementation mistakes and testing regimen," he said that "we urge the state education department to do it right this time." He supports increased school aid, expansion of charter schools, and more support for "failing" high-needs schools, including through the community schools program.

Those are significant, but they are modest; mostly more funding and a do-over of the common core rollout, well short of new departures.

Historic turning points in New York educational policy
This could be a time of opportunity for major changes to strengthen education in New York. But that would require bold, imaginative leadership.

Over the years, history suggests, New York periodically worries about, analyzes, and occasionally takes dramatic initiatives to strengthen its educational system or move off in substantially new directions.

*New York commits to public education. In 1812, after earlier plans to stimulate the establishment of public schools (or "common schools" as they were called then) had failed, the legislature passed the Common School Act of 1812. It created a state superintendent of public schools, outlined a process for creation and operation of local school districts, provided that the voters in each district would elect trustees to operate the schools, established a system of local revenue raised by towns and counties matched by state aid to support the schools.

The act established three precedents: public schools are a function of the state; they are to be locally administered with state oversight; and funding is a joint state-local responsibility. Article XI of the current state constitution reflects the state commitment established back in 1812: "The legislature shall provide for the maintenance and support of a system of free public schools, wherein all the children of the state may be educated."

*A governor initiates consolidation and streamlining of state educational policy. New York entered the 20th century with responsibility for educational policy scattered between the state Department of Public Instruction (successor to the Superintendent of Public Schools established in 1812) and the Board of Regents, established years earlier mainly to oversee higher education. Governor Theodore Roosevelt (1899-1901), a Republican, appointed a study commission which recommended consolidation of educational oversight in a new State Education Department under the Regents. "The plan proposed is simple, effective and wholly free from political or partisan considerations," Roosevelt said, optimistically, in a message to the legislature in 1900.

However, partisan bickering and procrastination stalled action until 1904 when, during the tenure of Roosevelt’s successor, Republican Governor Benjamin B. Odell, Republicans in the legislative majority drew up a bill to implement the recommendation.

But Democrats denounced the bill, in part because Republicans had proposed it. Democratic Assembly Minority Leader George Palmer called it "the most vicious...partisan legislation offered before this body in the last decade." The bill passed by a strictly party vote, except for one Democratic assemblymember who broke ranks to vote for it. But it launched New York onto a new educational path.

*A Commissioner of Education charts a new course for education. New York's first Commissioner of Education, Andrew S. Draper (1904-1913), took charge of educational policy. "The public school system has come to be the main hope of our nation," he wrote in his book, American Education, in 1909. "In this American system of schools the predominant characteristics of our future American citizenship are being, and must continue to be, developed." Schools should be expected "to give every child not only the means of informing himself and of expressing himself, but also a definite trade or vocation through which he may earn a living."

Like most effective commissioners since then, he recommended policy actions to the Regents, worked for their approval, and then vigorously implemented them, rather than waiting for the Regents to tell him what to do.

Draper raised standards, adjusted the curriculum to ensure students received instruction that would make them job-ready and also effective citizens, clarified and strengthened the roles of local principals and superintendents, and pushed for school consolidation. He supported stronger teacher training and established a statewide teacher retirement system. Draper's initiatives strengthened and elevated  education.

*A governor dramatically increases state aid for education. State aid to schools was meager in the early 20th century. Governor Alfred E. Smith (1919-1921, 1923-1929), a Democrat, championed public education and pushed for more school funding. When the Republican-controlled legislature balked, Smith appointed a Commission on School Finance and Administration headed by a prominent civic leader and businessman, Michael Friedsam, president of  B. Altman & Company department store in New York City, which recommended a substantial increase in state funding in 1926.

The Friedsam report resulted in a good deal of public support for substantially increased aid to education. But the fiscally tight-fisted legislature refused to act on the report. Smith made education aid a priority in his successful 1926 re-election campaign, denouncing his political opponents' "cheap political tricks" and "underhanded propaganda." The 1927 legislature raised funding to $82,500,000, a significant increase. But in a political swipe at the governor, legislative leaders announced that this was $2 million less than Smith's request, an indication, they insisted, of the legislature's fiscal frugality.

*The Regents revamp education policy. By the early 1930s, educators were complaining that curricular requirements were outdated, employers asserted that public education was not adequately preparing students for jobs in business and industry, and many taxpayers thought that education had become too costly.

The Regents responded by launching a searching analysis, The Regents Inquiry into the Character and Cost of Public Education, in 1935-1938. When the legislature showed reluctance to fund the study, the Regents secured support for it from the Rockefeller Foundation. The study was headed by highly respected Regent Owen D. Young, who was also chief executive officer of General Electric. It was carried out by recognized experts in education and public policy. The inquiry issued a summary report and ten supplemental reports on specific topics.

Youths leaving high school "are not adequately educated...not prepared to play a helpful part in the life of this state," the report said. The school curriculum "has not been designed to fit them for the new and changing work opportunities which they must face in modern economic life." The report recommended more technical and vocational training to impart "immediately marketable skills" and "character education," training in civics and citizenship, and many other curricular changes.

The Education Department should relax its regulatory oversight over the schools, allow greater local school board autonomy, and concentrate on identifying and disseminating modern educational practices to the schools, it said.

The report was a wellspring for substantial changes in education policy, practices, and curriculum over the next decade.

This could be another historic turning point for education in New York State
The past few years of education policy disarray, and the historical examples outlined above and others that might be cited, suggest five insights for shaping New York's future educational plans.

One, leadership is critical, and it can come from the Governor, Regents, Commissioner of Education, or key legislators.

Two, for many years New York's educational system was regarded as among the best in the nation. Regents exams and degrees were something approaching a gold standard in education. Those were years before substantial federal involvement in education, before externally-created standards such as common core, and before a continual barrage of proposed educational reforms from outside think tanks such as the Gates Foundation. New York leaders acted on New York reports on the state's needs and opportunities. This might argue for returning to a system of more reliance on New York's own educational experts and less on outsiders.

Three, a carefully-compiled, visionary, thoughtful analytical report, describing current conditions, setting forth a vision, and outlining a preferred course of action, can inform and streamline the process of reaching a consensus and taking action.

Four, sometimes a bold, innovative, mostly unprecedented new approach may be needed, e.g., a new way of preparing and evaluating teachers, more robust and imaginative integration of educational technology and social media in education, more sharing of resources between schools (for instance, courses taught over the web), different forms of evaluation, or a new way of funding public education.

Five, whatever is proposed and enacted will require years to be implemented, take root, and have a measurable impact.

***
Dr. Bruce W. Dearstyne lives in Guilderland, New York. He is the author of The Spirit of New York: Defining Events in the Empire State's History, published in 2015 by SUNY Press.