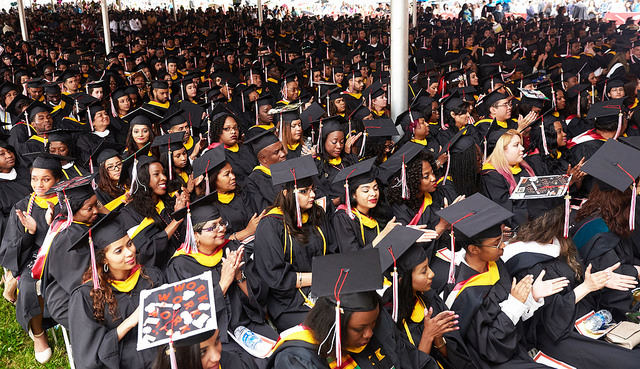 Gotham Gazette recently reported that Brooklyn City Council Member Inez Barron, chair of the Council’s higher education committee, introduced a bill aimed at studying the possibility of eliminating tuition in the CUNY system. Barron said, “College should be a right that is part and parcel of a commitment we make to provide free public education in grades K to 12.” Gotham Gazette writes that this was “a ‘commitment’ that was, in fact, extended to college for the majority of CUNY’s history - more than 150 years where the city university system has been an engine of opportunity for city residents, especially those from modest socioeconomic backgrounds.”

While Gotham Gazette does mention that tuition was free for “qualifying students,” many appear to have read the article and missed that point. Unfortunately, there are quite a few people who have accepted the myth that CUNY was free until the 1970s. This was only true for those students who were accepted into the day school. By contrast, during the 1960s, the majority of CUNY students were enrolled in the evening college (SGS) that had a substantial tuition charge.

Indeed, today a larger share of CUNY students have no tuition obligation than did in the so-called free era; the difference being that then it was based on merit while today it is overwhelmingly based on family income.

Today, because of weak skill levels, many entering CUNY students require extensive remediation to reach a minimum level of proficiency. Graduation rates at many of the community colleges are below 20 percent. The overwhelming majority of weakly-prepared students already have no tuition obligation. Barron and other City Council members, and many others, it seems, want to extend this benefit to all CUNY students.

Yet, any free tuition proposal is likely to worsen the situation for those least-prepared for college as the resulting enrollment growth would stretch support resources even more thinly and create more havoc to students’ ability to schedule their classes consistent with their other responsibilities. This is exactly what happened when CUNY began Open Admissions in the 1970s.

As I wrote for Gotham Gazette last year, I believe that all students should have a small tuition obligation. While this would mean the poorest students would have to take out a small debt, they would make much more efficient decisions about their educational choices. It would also close the tuition gap between lower middle-class students and poor students without the costly tuition-free proposal.

However, my two main complaints with the free-tuition proposal are: one, it does not address the issue of making colleges more efficient; and two, it ignores the need to shift to occupational education, focusing on certificate programs, and other short-term occupational programs.

Whether the discussion is around national free tuition or a CUNY proposal that may come from the committee the City Council is considering, even critics neglect to look at ways to improve the four-year college delivery system. Forty years ago, CUNY and most college systems were dominated by a teaching faculty of professors who taught four courses each semester. Now, however, virtually every state four-year college system privileges faculty research so virtually all faculty have teaching loads of no more than three courses per semester. Indeed, based on this research model, new CUNY faculty hires teach only two courses each semester during their six-year probation period. Once CUNY faculty gain tenure they are no longer required to do research but their three-course teaching load continues. Certainly there should be serious discussion of reducing the privileging of research endeavours, and the ability of tenured faculty to maintain low teaching requirements despite no longer doing research.

Faculty are able to reduce their three-course teaching loads by teaching large classes. At Brooklyn College faculty received double credit for teaching 110 students; and the benchmark is lower at other schools. The vast majority of these large sections use multiple-choice exams that are scanned and use textbooks which have quizzes that are submitted and graded electronically. Thus, faculty efforts are virtually the same as for smaller sections and yet they are richly rewarded.

This desire to reduce teaching requirements has also driven some departments to increasingly offer online and so-called hybrid courses where in-class teaching is reduced. At Brooklyn, each semester there are a few faculty members who teach their entire program online so that they are totally absent from campus. Many other courses, including some large sections, are taught as hybrid courses – where students meet once rather than twice each week – so that faculty are on campus only one day each week. When I proposed a resolution that the faculty norm should be a minimum of two days of teaching responsibility each week, not one faculty chair supported it. Thus, colleges increasingly have phantom faculty and administrators have been powerless to stem the tide.

Another way to increase efficiency is to have teaching lines be more consistent with student demand. For years, there has been a decline for many liberal arts majors as student interests have shifted to business and other applied areas. However, tenure and continued elitist notions of college education has limited the reduction of faculty in liberal arts areas. This is most glaring at the CUNY Graduate Center where teaching requirements are half what they are at the four-year colleges.

A whole range of expensive Ph.D. programs reside there in areas where the small number of graduate students has very low prospects of gaining faculty positions. But once more every effort is made to protect these costly programs. Closing down Ph.D. programs at the CUNY Graduate Center, limiting the number of CUNY colleges offering low-demand majors, and consolidating these small departments should be a priority if free tuition is pursued.

A second area of concern is the continued overemphasis on four-year degrees. As mentioned, too many of the weakly-prepared students have an unsuccessful experience in the community colleges that are overwhelmingly geared to the transfer function. And many of those who successfully transfer to four-year colleges flounder and limp to graduation with degrees that do not lead to employment in their fields of study.

During the so-called free era, CUNY students came from a small population cohort that was born during the Great Depression and graduated in the baby-boom era when expanding government services and educational institutions created a large demand for such programs. Today we no longer have expanding government, expanding social services, or expanding teaching positions. Students need more technical and applied skills desired by private industry and public colleges must be transformed to meet these needs.