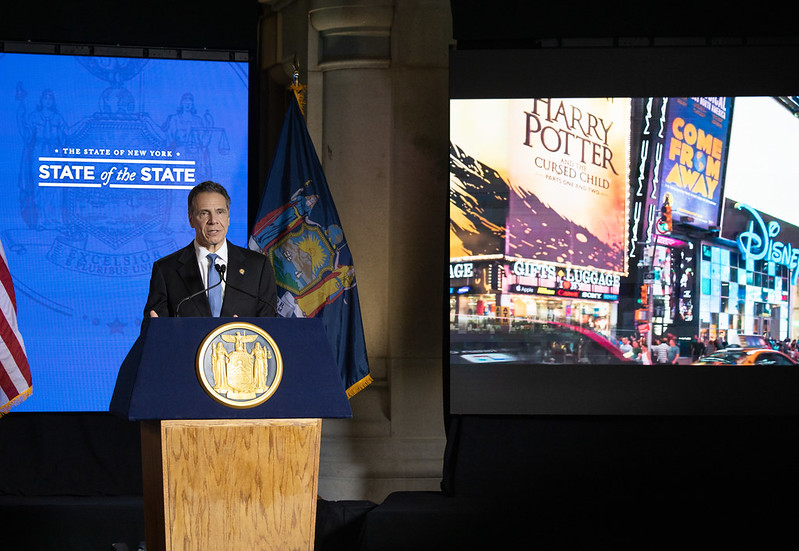 In his second of four planned State of the State speeches this week, Governor Andrew Cuomo on Tuesday outlined a plan to revive New York’s struggling economy, get New Yorkers back to work, and to prepare them for jobs that adapt to a post-covid future.

In his first speech on Monday, Cuomo presented a broad seven-point agenda to bring an end to the pandemic and to put New York on a path to recovery. He laid out proposals to transform the state’s public health system, stabilize state finances, jumpstart the economy, transition to green energy, and to ameliorate historical inequities that have harmed low-income communities of color. On Tuesday, he delved deeper into his economic renewal plan.

“As history teaches us, positive growth occurs not from fighting or even winning the war,” Cuomo said Tuesday, revisiting his analogy from the first speech of New York’s war for survival against the COVID-19 pandemic, with remarks delivered both days from the War Room at the state Capitol. “Warfare only stops the evil. What must follow post-war is the reconstruction. That is where growth occurs...We will need to adjust to the new social and economic realities of the post-COVID world.”

He announced a mass rapid testing program, assistance for the arts and culture industry, a proposal to mandate affordable broadband services, and new job training and workforce development programs, among other things.

The first and largest hurdle the state faces in saving jobs and businesses is controlling the pandemic. As the state’s incipient vaccination program has been slow to roll out, largely because of state bureaucratic roadblocks and a lack of federal planning, it is likely to take months to achieve herd immunity and covid cases and hospitalizations have been on an alarming rise in recent months.

In his speech, Cuomo took stock of that fact. “The vaccine is the weapon that will end the war. But it won't hit critical mass until June, September or even December,” he said. Instead of promising a speedier vaccination program, he offered mass rapid testing as a solution that can allow businesses to reopen and more economic activity to occur.

Cuomo said the state piloted the effort at the recent Buffalo Bills game, testing 7,000 fans and monitoring contact tracing results, and that it has shown success so far. “Why can't we use rapid testing to open restaurants in orange zones? Theaters, offices, there are so many options,” he said, though he did not acknowledge some of the fairly unique conditions of an outdoor football game in an enormous stadium.

The third-term Democratic governor said the state will partner with local real estate leaders to set up hundreds of pop-up rapid testing sites and will work with commercial property owners and managers to provide regular testing for building tenants. “Office buildings are the engines of our economy,” he said. “Bringing workers back safely will boost ridership on our mass transit, bring customers back to restaurants and stores, and return life to our streets.”

Among the industries particularly devastated by the pandemic is arts and culture. For instance Broadway, a crucial aspect of New York City’s tourism industry and overall economy, has been closed since March 2020 and is expected to remain that way until at least June of this year.

Cuomo said the state will provide much-needed assistance to workers in the industry through New York Arts Revival, a public-private partnership spearheaded by Hollywood producer Scott Rudin and CEO and founder of Tribeca Enterprises Jane Rosenthal, with the New York State Council on the Arts. The program will organize pop-up performances and events across the state starting next month. The line-up will include prominent names including comedians Amy Schumer and Chris Rock, actor Hugh Jackman, opera singer Renée Fleming, and trumpeter Wynton Marsalis.

“We cannot wait until summer to turn the lights back on for the arts and provide a living wage for artists. We will not let the curtain fall on their careers or on the future of our cities,” Cuomo said. The program will end with two major events: the opening of Little Island at Pier 55, which will be an event space, and the 20th anniversary of the Tribeca Film Festival in June.

The state will also partner with Elizabeth Alexander, president of the Mellon Foundation, to launch the Creative Rebuild initiative, Cuomo said, to put 1,000 artists back to work through grants and fund community arts organizations.

Perhaps the biggest change in the nature of work, employment, and office use after the pandemic will be the extent to which the shift to remote work continues. As the state went into lockdown, many industries were able to continue functioning as New Yorkers worked from home. But that shift also exposed the state’s deep digital divide and the lack of access to high-speed internet, which disproportionately hurt people in poorer communities and neighborhoods of color.

“A remote economy requires high-speed internet for all,” Cuomo said Tuesday. Though he noted that most parts of the state have access to broadband internet, in many cases the service remains unaffordable. “Access is one thing, but access, if it's not affordable, is meaningless,” he said.

Cuomo promised to introduce legislation to mandate that internet service providers offer $15-per-month broadband to all low-income households, and also said the state would subsidize that service for families that cannot afford even that.

Another result of the pandemic’s impact on travel, work, and workplaces is that it has left hotel and office spaces largely or fully vacant for months. This has created challenges for hotel owners and their workers, commercial landlords, and many others who rely on economic activity for their own livelihoods. And even as that abundant space lies empty, homelessness is still at crisis levels and many New Yorkers struggle to pay the rent, with an uncertain future related to the ongoing eviction and foreclosure moratorium. Cuomo is proposing conversions of commercial space into affordable and supportive housing. The governor promised to introduce legislation “to create a five-year period during which property owners may convert office buildings and hotels in New York City to residential use,” according to a press release, but he did not provide further details.

Cuomo also announced a new “commission on the future of the New York economy” led by the NYU Wagner School of Public Service and tasked to “draw a roadmap to find opportunities for New Yorkers to get back to work in jobs that pay well, in industries that will grow rather than disappear in the coming decades.” The commission will also explore the “low-tide America issues” of inequality and structural racism that have been made apparent and exacerbated by the coronavirus, he said. The governor did not name the members of the commission. According to a press release, “The Commission will be composed of leading members of the nation's academic, business, labor, and civil society leaders. NYU Wagner School of Public Service Dean Sherry Glied will serve as Executive Director of this Commission.”

The governor offered other jobs-related announcements as well, including a Jobs of the Future program that includes a Pathways pledge by 15 of the state’s largest employers to train low-income workers in underserved communities and a proposed expansion of SUNY’s online training center.

Cuomo did not mention green jobs, which was a significant item in his agenda and will likely be central to one of his remaining speeches on Wednesday or Thursday along with an ambitious infrastructure program that he also previewed.