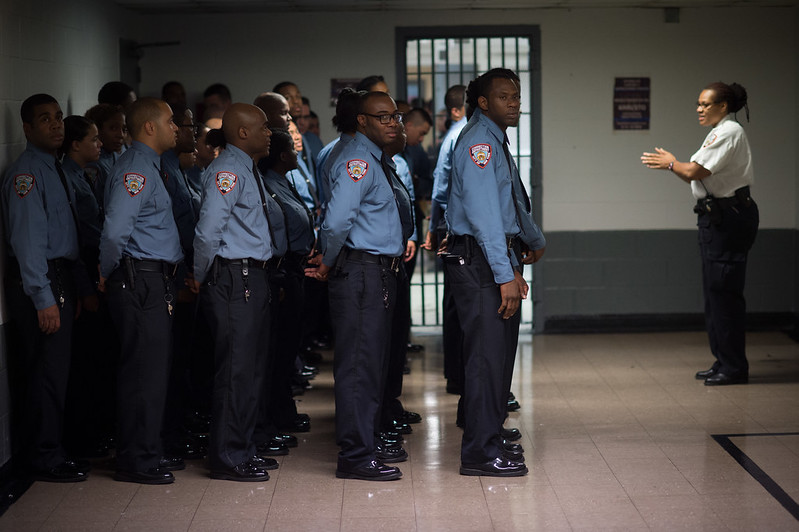 New York’s state government, its counties, and municipalities altogether spent $18.2 billion in 2019 on police, jails, prisons, prosecutors, parole, and probation while only spending about $6.2 billion on mental health services, public health, youth programs and services, recreation, and elder services, according to a new report.

The report, by the nonprofit Center for Community Alternatives, examined local, county, and state budgets to place into stark contrast the priorities and funding allocations of the state and localities at a time when the coronavirus has created a severe fiscal crunch at all levels of government. 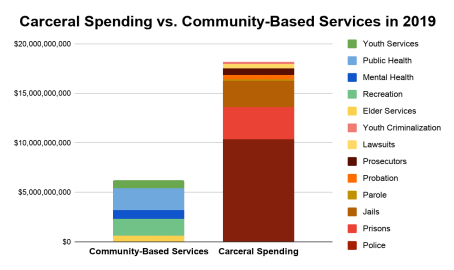 “Looking at this looming fiscal crisis, we wanted to be part of providing the data to make the case that New York should be looking at reducing the size, scope and tentacles of the carceral system, rather than putting youth programs, elder services and mental health services on the chopping block,” said Katie Schaffer, CCA’s director of organizing and advocacy, lead author of the report, in a phone interview. CCA calls itself "a leader in decarceration efforts."

Last year, the death of George Floyd, a Black man, under the knee of a white police officer in Minnesota kicked off an acute national conversation on cutting spending on policing and reinvesting resources into communities of color that have borne the brunt of systemic structural racism. In New York, it triggered months of sustained protests and a movement to “Defund the NYPD,” a demand that Mayor Bill de Blasio paid mind to and was intensely debated by the New York City Council. The final budget was ostensibly presented by de Blasio as cutting police spending by $1 billion, but included cost shifts and unrealistic goals for overtime reductions that were broadly criticized for funny math and budget gimmickry. “The mayor pretended to cut the NYPD’s budget. What he did was purely cosmetic,” Schaffer said.

The conversation has also involved what roles and responsibilities the police should have and a continued reexamination of how many people are sent to jail, especially based on inability to pay bail, because of parole violations, or due to issues related to mental health or substance use.

The CCA report found that local governments spent $7.49 billion in total on the carceral system, counties spent $6.47 billion, and the state spent $4.25 billion. Policing accounted for most of the expenditures, altogether about $10.35 billion, or 57%. That number also comes with a major caveat. It does not include the cost of fringe benefits and other spending that can inflate total spending. For instance, the NYPD’s operating budget may be pegged at nearly $6 billion, but actual spending each year is closer to $11 billion with fringe benefits, miscellaneous, and capital spending. “This is definitely an undercount,” Schaffer said.

Naturally, New York City topped the list for total carceral spending, at $9.7 billion in total between city, county, and state expenditures. The city’s spending on policing and jails has also been debated as the plan to close the notorious Rikers Island jail complex and spend roughly $8.2 billion to build four new borough-based jails is implemented.

The “Defund the NYPD” movement has not abated and is among the hotly-debated issues in this year’s New York City mayoral and other races for city government positions, and is taking center stage as the city and state have begun formulating their budgets for the next fiscal year. There has been pushback from critics of the movement, who point to a national uptick in shootings and murders, including in New York City, to argue that communities need more policing, not less.

“We deeply believe in the importance of community safety but community safety is derived from people having the housing, educational opportunities, economic opportunities, mental health services and youth programs that they need,” Schaffer said of that criticism. “And if our response to young people, our response to economic desperation is criminalisation, that has tremendous both human and fiscal costs.”

Kevin Mays, an activist who was formerly incarcerated, said the report is a “scathing” indictment of the state’s leadership. “They’re quick to take and criminalize, quick to take and put people in prison,” he said in a phone interview. “But they don't take and throw money at support programs or diversionary programs that would certainly prevent individuals from having to be subjected to compounded trauma.”

Schaffer also expressed optimism that consensus is emerging among state legislators, activists and community groups about how the state allocates its funds. Among those lawmakers is State Senator Julia Salazar from Brooklyn, who chairs the Senate’s Crime Victims, Crime and Corrections Committee and the Women's Issues Committee.

“The CCA report confirms that New York prefers to waste money on entangling people, disproportionately people of color and other low-income people, in the inhumane and racist criminal legal system rather than providing for the health, mental health, education, housing, jobs, real public safety, and youth programs our communities desperately need,” Salazar said in a statement. “In fact, as documented in this invaluable report, New York spends three times on the carceral system as compared with community-based human services that actually help people stay healthy and safe. This disparity is a call to action. We must do better. Our public resources must be used to help families and communities, not to harm them. I look forward to working with my colleagues in the legislature to refocus our priorities. We must divest from the carceral state and invest in our communities.”

Note - this article has been updated to note that the borough-based jails plan is estimated to cost $8.2 billion, not $8.7 billion.