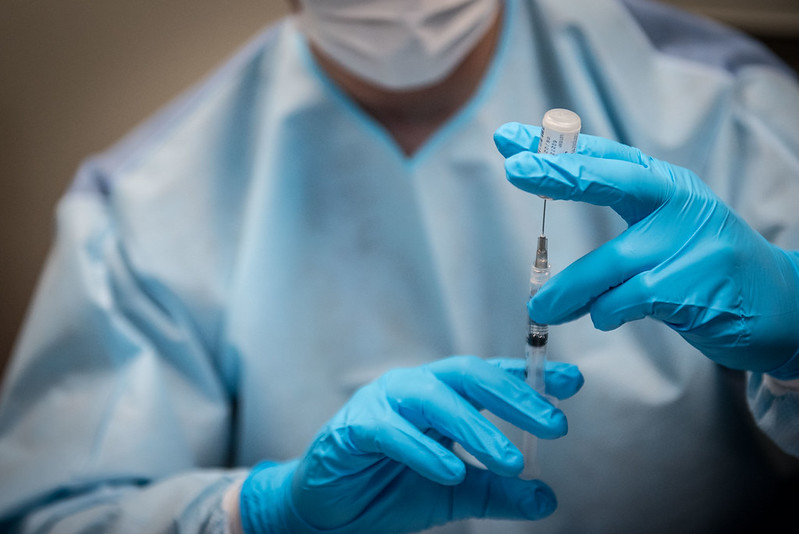 The New York State Office of Mental Health quietly issued guidance in April allowing psychiatric centers to vaccinate patients for COVID-19 over patient objections and without a court order in a unusual break from treatment protocols. The policy makes psychiatric patients in state custody one of the only adult populations in New York subject to forcible vaccination.

The guidance, issued April 22, is a "clarification" giving hospital staff discretion to administer the vaccine without consent, an intrusive action clinical staff and lawyers working with patients say is unnecessary and alarming. It came more than four months after people living in state-run inpatient facilities became eligible for the vaccine and despite uptake being roughly equivalent to the statewide adult vaccination rate.

A spokesperson for the Office of Mental Health (OMH) told Gotham Gazette the agency has not followed through with any forced vaccination though at least one facility had initiated the process before patient representatives objected. OMH would not say how often facilities have attempted to force vaccinations or why the guidance was needed.

The news comes over a year after the coronavirus pandemic swept through OMH psychiatric facilities and disproportionately killed patients living there in close quarters with limited covid safeguards. While OMH said the policy has not led to any vaccination over objection, multiple attempts have been made by staff and it remains on the books. The state psychiatric system, where patients are held involuntarily, has been plagued for decades with due process concerns.

There has been virtually no public oversight of conditions in OMH psychiatric centers by either mental health committee in the State Legislature since the pandemic began.

Under the guidance sent to facility leadership from OMH headquarters, psychiatric centers "may pursue the usual treatment over objection process for routine medical procedures which do not require informed consent."

That means, unlike with psychotropic medications and medical procedures that are typically deemed by the hospital to require "informed consent" (itself a grey area) and a judge's sign-off, hospitals can pursue an internal administrative procedure and possibly avoid a court order to vaccinate a patient against their wishes. If it does get to court (only after multiple internal appeals), the burden of proof is on the patient to show the administration is incorrect or abusing its discretion, a playing field deferential to OMH, lawyers said.

Any medical treatment over objection is rare. In general, hospitals pursue treatment over objection for patients refusing to take antipsychotics and other psychiatric medication and almost never for something as mundane as a vaccine, according to people with knowledge of the facilities. If they do, they normally need a court order before administering any treatment thanks to a 1986 Court of Appeals ruling, Rivers v. Katz, that included treatment choice among an individual's due process rights.

According to one clinical staff member at an upstate OMH facility, employees sometimes discuss the possibility of seeking treatment over objection for medical purposes like kidney treatment or insulin for diabetes, but it usually comes to nothing.

“I’ve never heard of that actually going forward,” they said over the phone, speaking anonymously because they weren't authorized to talk with press. No lawyer or the clinician Gotham Gazette spoke with had ever heard of vaccines being given over objection to psychiatric patients in state institutions.

But the April guidance says hospitals can unilaterally seek treatment over objection without a Rivers hearing under a more limited protocol used for "routine" and ostensibly non-invasive regimens. In these cases, appeals by the patient must go through multiple levels of hospital leadership all the way up to the OMH Commissioner before they can go before an external court. That is a matter of attrition and the objection may never reach a judge, lawyers say.

The agency has denied any vaccinations over objection have taken place under the guidance. "OMH has not vaccinated anyone over objection and we would not do so without a court order. The April 22 clarification is for patients without capacity who are NOT objecting," wrote OMH spokesperson James Plastiras in an email. He later clarified, after an inquiry, that the guidance did include instructions on vaccination over patients' objections: "The last line of the guidance points out that this does not pertain to patients with impaired decisional capacity who object. In those instances, facilities were directed to follow normal procedures for treatment over objection. In any case, OMH has not vaccinated anyone over objection."

OMH has not said why the guidance was needed or how many patients may have been targeted for the procedure. One facility did try to vaccinate patients over their objections, according to Plastiras, but voluntarily ended the process. People with knowledge of the situation said several patients were in line to be injected before the facility pulled the plug after lawyers and clinical staff objected.

"While an OMH facility did seek treatment over objection for patients with impaired decisional capacity as permitted under 14 NYCRR § 27.8, those notices were subsequently withdrawn. No OMH patients or clients have been vaccinated over their objection," Plastiras wrote. He did not say which facility or how many patients were targeted.

About two thirds, 68%, of the 3,390 people living in in-patient state psychiatric facilities have received at least one dose of the COVID-19 vaccine, according to OMH as of June 15, compared to 70% of adult New Yorkers statewide. The rate among the roughly 12,500 OMH facility staff is 72%.

"As far as the patients are concerned, a lot of them saw their friends die. They were ready for the vaccine the day it was available," the clinician said.

Treatments over objection orders can be traumatic and in some cases dangerous. Often patients acquiesce to the treatment, which must be in the form of an injection. But when they refuse, they are either held down in their beds by hospital staff or put into a restraint bed and moved to a seclusion room.

“The preferable way is to have staff physically restrain because it’s much faster…it almost always happens in their bedroom, on the bed. But if a patient is fighting…then they do use a restraint bed,” the clinician said. From their own experience working with patients, they estimated about one in five cases of refusal require restraint and only a fraction of those are seriously violent.

The only similar situation is the state Office for People with Developmental Disabilities (OPWDD), a branch of OMH separate from psychiatric centers. OPWDD expanded the mandate of so-called Informed Consent Committees -- administrative bodies established at each provider to oversee consent for certain procedures -- to include COVID-19 vaccines in cases where clients could not consent because of a developmental disability and lacked a designated surrogate.

"For those who do not have another authorized surrogate decision-maker to assist them, Informed Consent Committees have been authorized to provide informed consent for the COVID-19 vaccine pursuant to regulation and based on each person’s wants and needs,” wrote OPWDD spokesperson Jennifer O’Sullivan in an email. She did not confirm whether ICCs have been used in cases where clients actively refused a covid inoculation.

The vaccination rate of people living in OPWDD residential facilities was 86.5%, according to O'Sullivan, well above the state average and dwarfing the 38.2% of OPWDD clients living at home or in their community. The office did not have data on the number of clients vaccinated through an ICC.