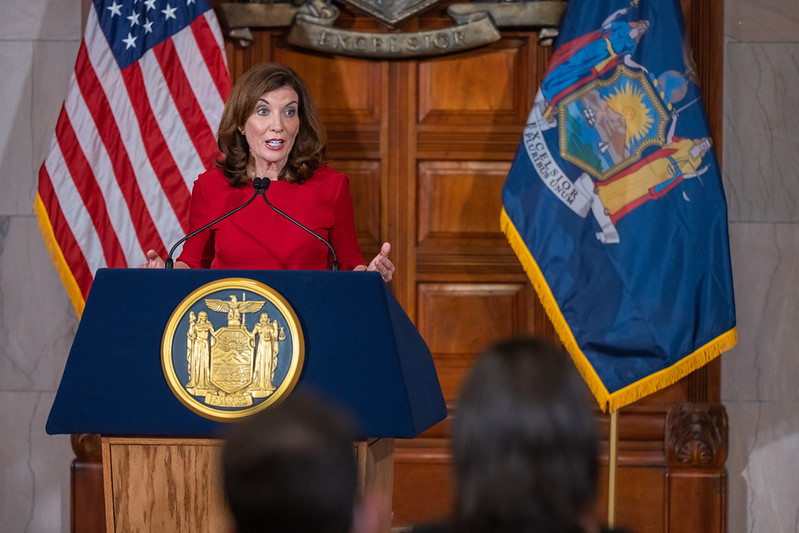 Governor Kathy Hochul's self-imposed transition period ends Friday. Hochul has already made a number of changes to the executive chamber and state policy -- but with the end of the 45-day interval she may reveal some key remaining personnel and policy decisions she has promised over the first weeks of her governorship.

Hochul, a Democrat, asked the public for patience to build her administration over the seven-week window amid an ongoing purge of officials implicated in the scandal-marred regime of her predecessor, Andrew Cuomo. As questions about her policies and initial commitments proliferated in the first weeks of her administration, the new governor said she would also take that time to evaluate many existing and forthcoming positions while making some notable appointments and policy decisions throughout. After that she would make additional decisions about which policies would stay and which would go in a number of previously outlined areas.

"I've asked for a 45-day period to be able to assemble my team, and I'm not going to be replacing people when they're in the middle of a pandemic on this day because I have so much to do to protect New Yorkers," Hochul said in an interview on MSNBC the morning after being sworn in. "I'll be taking an approach that's very different," she added, referring to Cuomo, who oversaw a "toxic work environment" and "culture of fear and intimidation," according to administration members cited in a report by the New York State Attorney General's office.

"As part of the 45-day transition period, we are reviewing the matters raised by recent investigations and exploring all ways to ensure accountability and open, ethical governing that New Yorkers will trust,” said Hazel Crampton-Hays, the governor's press secretary, in a statement to Gotham Gazette.

Hochul has also spent her first 45 days moving ahead on urgent priorities, while taking time to stake out a path of reform that veers from the abuses of power that led to Cuomo's resignation. In her first major address, she vowed to return students safely to the classroom, boost vaccination rates, and expedite emergency relief to renters, landlords, and workers excluded from federal aid. She has advanced many of those through school mask mandates, preparations for booster shots, and hiring more staff to process rental assistance applications. She has imposed controversial vaccination mandates on workers in a number of industries and settings, several of which are being challenged in the courts.

"Your priorities are my priorities—and right now that means fighting the Delta variant," she said in her first address.

Now many stakeholders hope to see the substance of some of her other commitments to a more transparent and ethical government, the details of her sexual harassment policies, and the fate of Cuomo's longtime allies and aides who still hold positions of power in the administration.

One key matter relates to possible conflicts of interest around the governor’s husband, William Hochul, Jr., a senior executive at the gambling and concessions company Delaware North, which has millions of dollars in state contracts, and the husband of Karen Persichilli Keogh, the new Secretary to the Governor, who is a partner at the powerful Albany lobbying firm, Bolton-St. Johns. (The principal of that firm, Giorgio DeRosa, is the father of Melissa DeRosa, the last Secretary to the Governor under Cuomo.) Hochul has said she is soliciting outside experts to create an “ironclad policy” to avoid conflicts of interest, though none has been made public.

A spokesperson did not respond directly to Gotham Gazette questions about the status of the ethics policy.

One of Hochul’s first commitments was to get rid of any state official named in the Attorney General's investigation into Cuomo's sexual harassment, which led to his resignation. According to Crampton-Hays, that promise has been fulfilled. Several other members of Cuomo's inner circle appear to be staying on.

"We are retaining a number of public servants who have demonstrated a commitment to the Governor’s agenda, and we look forward to working with our top tier team to deliver results for New Yorkers," Crampton-Hays said in a statement this week.

"To date I am still evaluating positions, but he is working very hard with us to chart the future going forward, so I believe he’ll be with us for some time,” Politico reported her saying on September 24.

Since 2015, Mujica has been instrumental in Cuomo's dominance over the state budget, which he wielded to reward allies, exert pressure on adversaries, and push policy through the Legislature. Prior to that, Mujica worked for the Senate Republican conference, which Cuomo, a Democrat, had helped keep in power for a number of years.

"If I was governor I would not have kept Rob Mujica," said State Senator Liz Krueger, a Manhattan Democrat who chairs the Senate’s finance committee, in an interview with Gotham Gazette. "But I'm not governor," she added.

Mujica also holds a Cuomo-appointed spot on the MTA Board, a seat he was confirmed to only after the former governor pushed through a change to state law making Mujica eligible.

Observers have noted that to be successful, Hochul will need to retain cabinet and staff members with institutional knowledge even as she tries to break from the political culture cultivated by Cuomo and other Albany power-brokers.

"The strongest administrations tend to be those that, in terms of their personnel decision, have a balanced portfolio of people with varied experiences," said Bruce Gyory, a longtime political consultant at Manatt, Phelps & Phillips LLP. "Yes, they have fresh faces but they also have some experienced hands."

Keeping Mujica may be a strategic calculation by Hochul to ensure strong footing in her first -- and potentially only -- state budget presentation. That Executive Budget, due in January, will be part of what determines Hochul’s legacy and sets the tone for her performance in the June Democratic primary.

"The preparation, presentation, and negotiation of that first budget is always very key for any new administration, especially one that comes in like this one out of the trauma of a governor resigning," Gyory said.

Some in Cuomo's executive chamber left with him, including fixers like DeRosa, senior advisor Rich Azzopardi, and Department of Financial Services Superintendent Linda Lacewell, who was also an MTA Board appointee of Cuomo. Over the course of weeks, others left, announced their departures, or were replaced, like Director of State Operations Kelly Cummings, who was succeeded by Kathryn Garcia, the former New York City sanitation commissioner and recent mayoral candidate.

On Thursday, the Hochul administration announced the resignation of MTA board member Larry Schwartz, a one-time Secretary to the Governor and, more recently, voluntary "vaccine czar" who was named several times in the Attorney General's report. He will leave the board when a replacement is confirmed by the State Senate, which is not expected until January, when session resumes.

“Larry Schwartz will be resigning, effective when the Senate confirms his replacement, and the Governor is grateful for his public service,” Crampton-Hays said in a statement. “To ensure that the MTA Board is accountable to riders and represents the voices of New Yorkers, our administration will be soliciting input from advocates, impacted communities, and experts on candidates to fill the open seats on the board, and we look forward to working with the legislature to confirm those appointments at the next legislative session and deliver the modernization, reliability, and enhancements New Yorkers deserve.”

Other Cuomo administration officials set to depart include Michael Hein, commissioner of the Office of Temporary and Disability Assistance, sources told the New York Post last month. Hein was responsible for delivering $2.6 billion in federal rent relief, which the previous administration was criticized for not moving quickly enough. The governor's office confirmed Hein's resignation to City & State Thursday. Dr. Theodore Kastner, commissioner of the Office for People With Developmental Disabilities, Office of Addiction Services and Supports Commissioner Arlene González-Sánchez, and Licha Nyiendo, commissioner of the Division of Human Rights, will also step down, according to the Post.

Speculation remains over the fates of other Cuomo administration holdovers, especially those from his inner circle, like SUNY Chancellor Jim Malatras, who was previously Director of State Operations for Cuomo.

Beyond Personnel
Emergency orders were a hallmark of Cuomo's administration in his final 18 months as the pandemic invaded New York. On her first day in office, Hochul signed an executive order leaving remaining provisions in place for 45 days while her administration reviewed them.

"All Executive Orders issued by previous Governors which are currently in effect shall remain in full force and effect until October 8, 2021, unless otherwise revoked, superseded or modified," Hochul's first order states. During that time, her administration would assess whether "additional orders" should be removed or replaced.

"Today, I am directing an overhaul of State government's policies on sexual harassment and ethics, starting with requiring all training be done live, instead of allowing people to click their way through a class," Hochul said on her first day as governor, taking a jab at Cuomo whose training was completed online.

She also said she “will sign an executive order” mandating every state employee undergo ethics training, "which, shockingly, is not required across the board."

That hasn't happened yet. According to a spokesperson, it is part of the 45-day review before new executive actions are taken. That commitment hasn't stopped Hochul from making other changes, like extending pandemic-era exemptions to in-person government meetings under the state's Open Meetings Law.

Hochul also promised to direct state agencies "to review their compliance with state transparency laws, and provide a public report on their findings." She said her counsel was working on devising a system to fulfill requests under the state Freedom of Information law "as fast as possible." FOIL requests have been plagued by delays for years leading to a hefty backlog, something Cuomo has been accused of personally interfering in.

A month later, her office issued a memo to agency heads giving them until October 20 to present a plan for better transparency and FOIL compliance.

Transparency advocates and journalists have been pushing Hochul to release the sum of the state's Covid-19 data, which they say could include over 100 data sets and are subject to FOIL. In response to a Gotham Gazette inquiry for a prior story on that data transparency, a spokesperson said Hochul would take executive action to create a more open government following the 45-day review.

Many lawmakers have expressed the feeling that Hochul's early commitments and willingness to collaborate is a sign that she is invested in a more accountable and collegial government. "Speaking as a legislator, I've had more contacts from her administration on more issues in her first 45 days than I had with the Cuomo administration in his 11 years," Krueger said.

Watchers are also waiting to see the conflicts of interest policy Hochul promised surrounding the work of her husband at Delaware North. That has become more pressing with the revelation by the Associated Press that Hochul is involved in negotiations to subsidize a new stadium for the Buffalo Bills, for which Delaware North is the concessions vendor (and whose Buffalo tenancy Hochul, a native of the state's second largest city, has said is important to her personally). The deal could cost the state up to $1.1 billion, according to the Bills’ proposal.

"That document should be made public so that everybody can take a look at it and know what the rules of the road are," said Krueger, who commended Hochul's acknowledgement that such a policy was required.

John Kaehny, head of the good government group Reinvent Albany, has called for Hochul to get independent verification from the state Attorney General and Comptroller of her disclosure and recusal process.