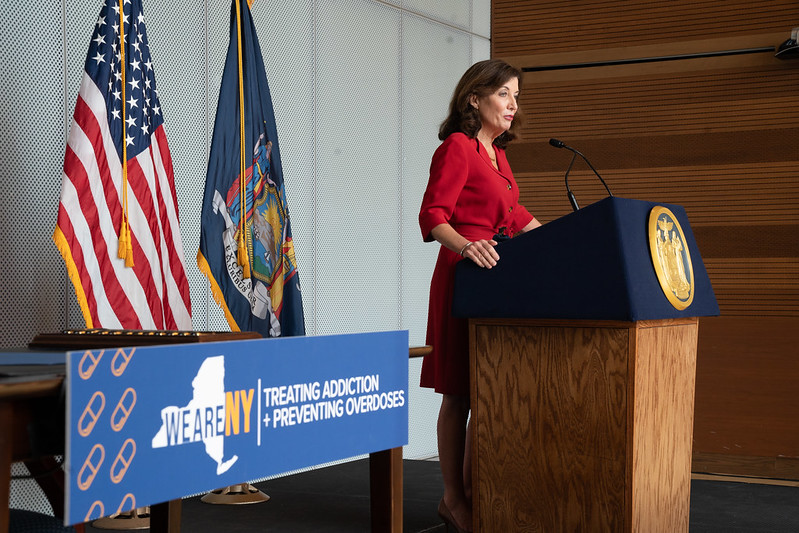 A new state regulation on access to medication-assisted treatment for those with substance use disorders is causing confusion and threatening patients’ recovery, providers say as they call on Governor Kathy Hochul to use her executive authority to immediately fix the problem.

On October 1, the state Department of Health began implementing a new statewide formulary that outlines coverage parameters for Medicaid patients receiving medication-assisted treatment (MAT). The new rule was meant to provide consistency across the state in access to MAT drugs like suboxone and buprenorphine, which are clinically-proven treatments for people with substance use disorders. But providers say there is a crucial flaw with the formulary: that it continues to require prior authorization for pharmacies to dole out certain drugs and places limits on their dosage.

Ahead of the October 1 deadline when the new rule became effective, providers warned that it would create a two-tier treatment system. New York no longer requires prior authorization for MAT drugs for people on commercial insurance after then-Governor Andrew Cuomo signed a law repealing it at the end of 2019. But, at the same time, he vetoed a bill that would have done the same for Medicaid patients. Effectively, wealthier New Yorkers have easier access while low-income New Yorkers, many of them Black and Hispanic, struggling with the same conditions face a greater administrative hurdle.

After the rule went into effect, treatment providers say they have seen their warnings become reality. In interviews, providers said the state failed to adequately inform patients or pharmacies of the rule change and that several of their patients faced trouble receiving their prescriptions. “Why would we do this when there's the pandemic and the epidemic both occurring at the same time?” said Dr. Justine Waldman, CEO of REACH Medical, an Ithaca-based harm reduction provider. “This was an easy fix.”

As Waldman pointed out, MAT drugs -- which block the effects of opioids and help prevent overdoses, hospitalizations and death -- can only be given out the day a prescription is written and, if a pharmacy lacks the correct drug or prior authorization, patients face the risk of having their treatment interrupted. “Everything that I feared is happening,” she said.

“It's being touted as something that's beneficial for our patients but all it's done is to destabilize patients who have been further destabilized by COVID and have less access to care to begin with,” she added. “And now here we are again at Ground Zero and it's just really disappointing.”

Providers and advocates have for years been calling for executive action to immediately repeal the need for prior authorization for Medicaid patients on MAT. Their calls have become all the more urgent as overdoses spiked nationally last year. Between March 2020 and March 2021, according to provisional CDC data, New York saw an estimated 5,437 overdose deaths, a number that could possibly increase once data is official, and a 32% increase from the prior year.

Advocates see some hope under Governor Hochul, who has spoken of her own family’s experience with the opioid crisis and who recently signed a package of legislation aimed at tackling the opioid epidemic. The new laws decriminalized possession of opioid antagonists such as naloxone that can prevent overdoses, decriminalized possession and sale of hypodermic needles and syringes, and established a MAT program for incarcerated individuals in state and local correctional facilities, among other measures.

“When the State of New York has the ability to take steps that can just minimize the stress that people are going through to make it easier on them and their families, to let them know that there should not be stigma associated with seeking medication assisted treatment or any other variation that you need to get yourself in order, we have to send a message,” Hochul said at the bill signing. “We are there with you.”

Last month, a spokesperson for Hochul said her office was “reviewing the legislation and will have more to say on this soon.​” Hochul’s office did not respond to a request for comment for this story.

But her administration did. A spokesperson for the state Department of Health said the new formulary expanded coverage compared to previous regulations. “Prior to October 1, 2021, when the New York State Department of Health implemented the statewide formulary for Medication Assisted Treatment (MAT) products, the Medicaid Managed Care (MMC) and Medicaid Fee for Service (FFS) Program plans covered only 64% of MAT products on their formularies as compared to the statewide formulary, which covers 100% of FDA approved products,” said Jeffrey Hammond, the spokesperson, in an email. “As a result of the change, all seven million Medicaid members now follow a single formulary, where preferred products and coverage parameters are consistent across the Medicaid Program, as opposed to a system where every managed care plan establishes their own formulary and coverage for these drugs.  The Department will continue to work with providers to make sure that Medicaid members’ treatment is not disrupted as a result of this expanded coverage.”

Hammond noted that in instances where prior authorization is required for a non-preferred product, it must be processed within 24 hours and if the preferred medication is out of stock or unavailable, pharmacies can provide a five-day emergency supply to patients. The Health Department also requires MMC insurance plans to issue overrides to pharmacies, allowing them to issue non-preferred drugs without prior authorization if a preferred drug is out of stock.

In practice, providers say, those rules aren’t clear to pharmacies and are an unnecessary level of red tape that doesn’t apply to those on commercial insurance.

Dr. Sonia Lopez, a medical provider in the Bronx, said that receiving prior authorization can take a day or more, precious time for a person in MAT treatment, and that there seems to be a lack of coordination between pharmacies and insurance companies. “They seem to have this bureaucracy about, ‘This is how prior authorization is done,’” she said in a phone interview, as she described a patient’s hours-long ordeal to try to get a prescription filled after the new formulary took effect. “My patient can't afford that.” Even a temporary disruption with MAT could force patients to seek drugs on the street, she noted, which could also possibly be laced with Fentanyl and lead to deadly overdoses.

“I feel like people don't understand the patient, that the patient is not the first priority in this system,” she said. “There’s all this bureaucratic craziness and the patient falls through the cracks.”

Louis Jones nearly became one of those patients. Jones is a syringe exchange outreach worker with VOCAL-NY, a nonprofit advocacy and service group, and is also in a MAT program to recover from years of heroin use. Jones was transferring between medical providers when the formulary kicked in, and was unable to get his prescription filled because he lacked the prior authorization for it. “I took the suboxone that I had and I was cutting it,” he said, having to stretch his existing prescription for three days before getting a new one. “I wasn’t sure about this pharmacy getting it delivered, the prior authorization coming through.”

“It was very uncomfortable. My anxiety level was very...There was some depression, you know, there was withdrawals,” he said.

Jones emphasized the dangers of disruption to patients like him on MAT. “Continuity of care is critical to anybody in this process of any kind of medicated assisted therapy or treatment,” he said.

“Who knows how many people might have died or gotten an accidental overdose,” he added. “It caused some chaos, some confusion. I don’t believe that's their intention but I believe that's what came out of it. That's how I felt.”

“It's basically a fairness issue...but I think it's also a major public health issue,” said Allegra Schorr, president of the Coalition of Medication-Assisted Treatment Providers and Advocates (COMPA). Schorr said the added red tape of the formulary may also discourage doctors from treating Medicaid patients and instead only treat people on commercial insurance. “It's like segregating the system and the gap is gonna just keep getting wider and wider and wider,” she said. “When a state makes decisions like that, the repercussions, it's like a cascading effect.”

“It's just pennywise and pound foolish,” she added.