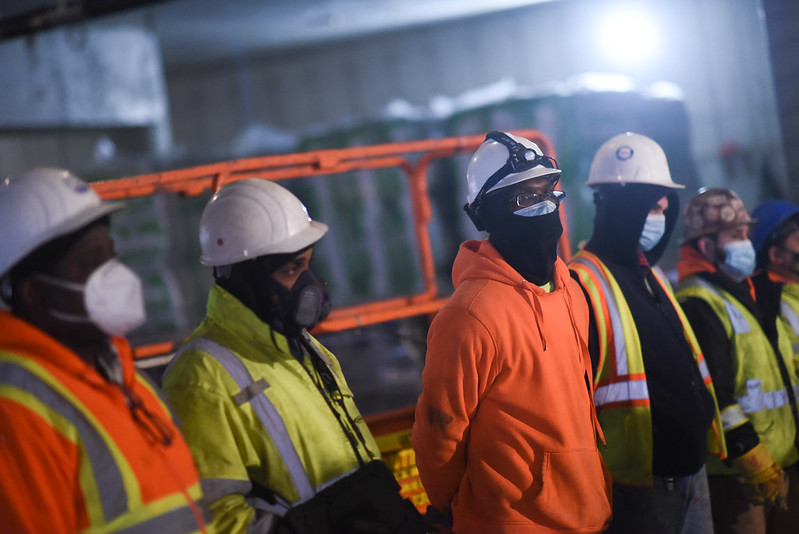 The construction industry was more deadly to workers in New York in the first year of the pandemic than in the two years prior, reversing a multiyear decline in the statewide fatality rate, a new report shows.

Forty-one workers were killed on construction sites in New York in 2020, including 13 in New York City, according to a report published Thursday by the New York Committee for Occupational Safety and Health (NYCOSH), part of an annual analysis previewed by Gotham Gazette. While that is fewer overall deaths than in 2019, the fatality rate among construction workers increased by 9% statewide as construction projects slowed and jobs shrunk, according to NYCOSH. New York City, however, saw that rate fall by a stunning 40%, in part speaking to conditions when the city was the epicenter of the pandemic.

At the same time, federal regulators conducted the lowest ever number of inspections in New York State in 2020, a 53% decline from 2019, the report found. It's another data point indicative of how much of an anomaly the first year of the COVID-19 pandemic was.

"As is the case for every single year that we've put out this report, construction remains in New York much more dangerous than it is in other parts of the country," said Charlene Obernauer, executive director of NYCOSH, an association of workers rights advocates, labor unions, and community-based organizations.

"One of the biggest disappointments is that OSHA conducted it's fewest number of inspections in the history of the agency," she said, referring to the federal Occupational Safety and Health Administration (OSHA), part of the U.S. Department of Labor. In 97% of cases where a worker died, employers had existing OSHA violations, according to the report. OSHA violations can range from failure to provide fall safeties or respiratory protection to misuse of scaffolding to having untrained workers, among others.

OSHA did not provide a comment in response to Gotham Gazette inquiries.

The report shows a vast majority of construction workers killed on the job in New York in 2020 were not unionized and a disproportionate number of workers killed across all sectors were Latino, continuing trends from years past. Latino New Yorkers are overrepresented in worker deaths across all industries, making up 10% of the state’s workforce but accounting for 18% of workplace casualties.

Labor advocates blame the construction deaths in New York on gaps in union representation, exploitation of immigrant workers, and a system that does little to penalize contractors for unsafe working conditions. Other reasons advocates point to are the sheer size of New York City and the collective height of its buildings (the NYCOSH report's title, "Deadly Skyline," pays homage to this).

"Obviously falls from heights are a huge cause of fatalities," Obernauer said. "It's a big city and I think that definitely comes into play."

But at the root of most workplace deaths is a lack of precautions and protections for workers. Four out of five fatalities investigated by OSHA on private construction sites in 2020 occurred on jobs where workers were not unionized. In New York City, every site OSHA investigated was non-union. (Deaths outside the city were evenly spread throughout the state, according to NYCOSH.)

Unionized workers tend to have more training, often through years of apprenticeship, Obernauer said. They also have clearer channels to report violations and an organization to back them against employer retaliation if they do.

Only 17% of New York City's construction workforce and 23% of the state's is unionized, according to an analysis of 2019-2020 U.S. Census data from the CUNY School of Labor and Urban Studies. Both are still higher than the national average of 13%.

Immigrant workers, especially people who are undocumented, often have even fewer avenues for recourse and support.

"I think particularly the fact that some Latinx workers are undocumented and are taken advantage of because they are afraid of losing their jobs, they're afarid of potentially being reported for their lack of immigration status," Obernauer said.

Latino construction workers are also less likely to be unionized.

A study from the Economic Policy Institute, a national non-profit think tank, found Hispanic workers held nearly half of all nonunion construction jobs over the ten-year period from 2006-2015, but less than a third of union jobs.

"It's painful, personally, because I feel as an Andean woman that our men are so often seen as disposable," said State Senator Jessica Ramos, a Democrat and chair of the Senate's labor committee who represents a heavily Latino district in Queens.

"These are people who are risking their lives to build luxury apartments. Whose wages are very often stolen. Who ride back on the 7 train covered in asbestos that they were asked to remove with little to no protection," she said.

Ramos sponsors a bill that would prohibit employers from using a federal electronic background check known as "E-Verify" to see the immigration status of workers, which she said forces undocumented New Yorkers to take less safe, non-union jobs. "That's the only reason that undocumented workers cannot join construction union," she said.

New York State does not require employers to use the E-Verify system but municipalities may opt to mandate it. The legislation could be challenged in court if enacted, Ramos said.

NYCOSH and Ramos also want to see worker protections built into government subsidies. For NYCOSH, that means an end to subsidies for developers who break safety standards given the large number of fatal worksites that also have OSHA violations. For Ramos, that means scrapping the state’s property tax abatement program formerly known as 421-A, a controversial affordable housing subsidy that critics say has little public benefit. Governor Kathy Hochul has released a modestly reformed version of what was 421-A, now known as Affordable New York, as part of her 2022 agenda, but it will be the subject of debate with the Legislature.

"I cannot support any measure that does not establish serious wage requirements and protections and of course that includes a reasonable threshold to ensure that more projects are built union," Ramos told Gotham Gazette, the first time she laid out her criteria for what might come next. The program will be the subject of heated budget negotiations ahead of the April 1 start of the state fiscal year, by which time a new state budget is due.

"It’s critical that decision makers continue to advance measures that bring the operation of all construction sites in line with the safety standards and protocols required at union construction sites," said Gary LaBarbera, President of the Building and Construction Trades Council of Greater New York, a labor union coalition, in a statement.

That includes statewide requirements for worker training, in line with a 2017 New York City law that mandates every construction worker receive 40 hours of safety and other training – something that can even the playing field across the unionized and non-unionized workforce.

NYCOSH is also pushing for the passage of Carlos' Law, which establishes new crimes for endangering workers and would raise penalties for employers, contractors, and other corporate entities when a worker is injured or killed on the job as a result.

The average fine issued by OSHA in New York State in 2020 was approximately $45,000, a 39% increase from $33,000 in 2019, the NYCOSH report showed. But for projects backed by many developers, that can be part of the cost of doing business. Even the number of press releases OSHA has issued related to construction site safety violations – a simple, cost-effective tool to discourage other offenders – have decreased, according to NYCOSH.

"In some cases unfortunately it's a part of their calculation," Obernauer said. "That they know that the fines will be less expensive than the cost of doing a job properly, most safely, without cutting corners."

Carlos' Law passed the State Assembly in 2021 but did not pass the Senate, where it first needs to go through Ramos' committee. "I cannot stress how important it is that we pass Carlos' Law in New York as soon as possible, it's literally a matter of life and death," Ramos told Gotham Gazette. She said the bill's Senate sponsor, Senator James Sanders, Jr., another Queens Democrat, "needs to make it a priority."

“Carlos’ Law is a priority bill for me this session. I look forward to working with Senator Ramos in getting this legislation passed,” Sanders said in a statement to Gotham Gazette.

A spokesperson for Ramos said a public registry of construction fatality data created by legislation she sponsored in 2020 would be opened this month.

The NYCOSH report does not make any conclusions about why the construction fatality rate in the city decreased so dramatically in 2020. The report states: "This data may suggest that New York City’s steps to reduce injuries and fatalities in New York City are making an impact, or that the decrease in the number of workers in the field also led to a decrease in rates. More, long-term data is needed to observe a trend."

The decrease coincided with a dramatic dip in new housing construction in New York City, though it's unclear what impact this had on construction worker fatalities.

Obernauer said the new Adams administration should explore the possibility of suspending or revoking licenses and construction permits for contractors with repeated OSHA violations. Another key move will be in who Mayor Eric Adams appoints to lead the city's Department of Buildings, one of the most significant vacant commissioners seats remaining.

"I'm really curious to see if a worker advocate will be appointed to that role in the DOB like Melanie was," Obernauer said, referring to former DOB Commissioner Melanie La Rocca, who is now Adams’ chief efficiency officer. "I think it's really important to have somebody with that vision at the helm of the agency."

The district attorneys who prosecute workplace safety violations also have a significant role to play – especially in addressing the disparity in Latino deaths.

"There needs to be more trust established between district attorneys' offices and immigrant communities," Obernauer said. "Every district attorney should proactively be thinking about…how they can increase the reporting of unsafe working conditions."