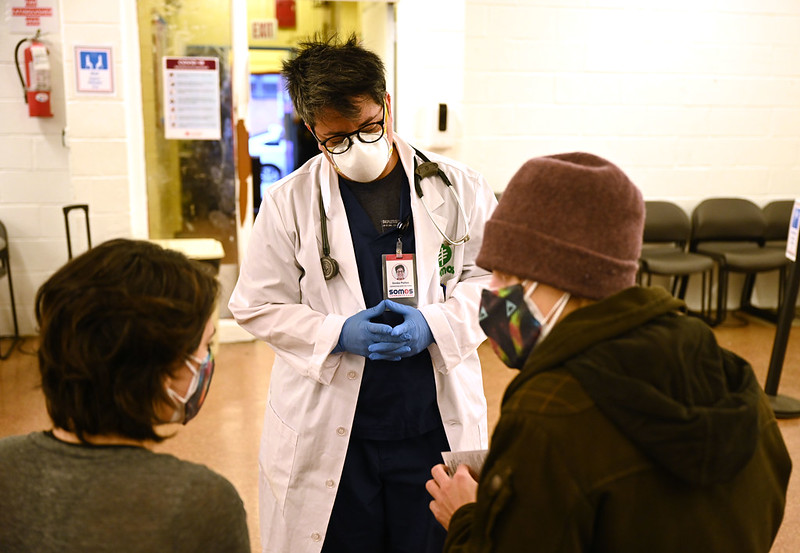 New York State is looking to reinstate all of the roughly 400 beds in the state's inpatient psychiatric system that were converted to medical beds at the start of the pandemic two years ago. But there is a long road to restore them despite mounting pressure from elected officials, representatives of the state Office of Mental Health (OMH) told lawmakers at a joint state legislative budget hearing Monday.

"Across the state there have been hundreds of beds that closed or migrated due to covid," OMH Commissioner Anne Marie Sullivan told members of the State Assembly and Senate. "We are looking to reopen all those beds," she said, adding that her agency was also looking for services "that could make the difference."

"We are really pushing to make sure those beds come back on line," she said.

But the ongoing pandemic continues to put stress on hospitals, particularly in upstate New York, making the timeline for reinstituting the psychiatric beds unclear. The beds allow for long-term commitment, whether voluntary or involuntary, for psychiatric treatment for the most severe mental illnesses, like schizophrenia.

"It's critical that those beds come back up and that they are available for individuals. Now many of the hospitals are saying they will be putting them back up but the time lag is significant," Sullivan told members of the Legislature's finance and mental health committees at the virtual hearing, one of the series of annual budget hearings being conducted by lawmakers.

The pandemic shift was part of a punctuated leap in a decades' long reduction in psychiatric beds due to the deinstitutionalization movement, low Medicaid reimbursement rates that discourage private providers from maintaining them, and shrinking state funding for state-run wards.

Inpatient psychiatric beds are a key part of the debate over calls for greater state intervention in the lives of people with the most serious mental illnesses, especially those who may become a danger to themselves or others. Also in focus is Kendra's Law, which allows courts to mandate supervised mental health care, known as assisted outpatient treatment (AOT), or commit an individual temporarily to an inpatient psychiatric center, if they cannot manage their care on their own and exhibit violent behavior.

New York City Mayor Eric Adams, Governor Kathy Hochul, and a bipartisan cadre of state lawmakers are pushing for an extension and expansion of the law in response to recent spikes in violent crimes and a spate of high-profile killings by New Yorkers with alleged mental illness. The latest occurred Sunday, when Christina Yuna Lee, a Chinatown resident, was stabbed to death in her home by an intruder, just four weeks after Michelle Go was fatally pushed in front of a subway train in Times Square.

The Hochul administration is calling for a five-year extension of Kendra's Law, which has been renewed continuously since it was enacted in 1999, Sullivan said. Hochul also wants to make it easier for judges to assign AOT for individuals with past involvement in the system, and expanded video conferencing to expedite doctors' testimony in court cases. "A major issue with making Kendra's Law timely for individuals is physician availability," Sullivan told lawmakers on Monday.

OMH also wants to make it easier for individuals in AOT to get records of their hospitalization, a process currently bogged down by HIPPA rules that can be streamlined in state statute, Sullivan said. Doing so would improve the continuity of care, she said.

Adams has also called for strengthening Kendra's Law and for judges to utilize the current tool more frequently, though 88% of petitions for AOT filed between February 2021 and 2022 were granted by a judge.

Lawmakers like State Senator Diane Savino, a Staten Island Democrat, and Senator George Borello, a Republican from Western New York, want to see the dangerousness criteria for AOT expanded and increase the period of mandatory commitment if someone fails to comply with the requirements of AOT.

"The flaw is in the definition under [New York State] Mental Hygiene Law that allows a hospital to retain a patient," Savino said at Monday’s hearing. "It's a deliberately vague statute that only applies at that time" of a mental health crisis or violent episode.

While the law has been praised by many experts, including Sullivan, as a way to improve outcomes for some people with severe mental illness and potential violent behavior, and often without inpatient commitment, some mental health advocates say it can be used punitively and infringe the civil rights of patients.

Sullivan expressed the need for "caution" around changes to state laws relating to involuntary commitments. "Expanding the statute, I know there's a lot of discussion about it, I think has to be very, very thoughtful and careful because of the issue of civil rights, which I know you appreciate," Sullivan said.

Regardless of the scope of the law, implementation hinges on the availability of psychiatric beds and workers to staff them. According to a 2019 white paper from the New York State Nurses Association, the number of certified inpatient psychiatric beds fell an estimated 636 between 2000 and 2018, from 6,055 to 5,419 beds across the state. More than two-thirds of those lost beds – 459 – came from New York City.

One of Adams' top asks to legislators at his budget testimony on February 9 was state funding for more psychiatric beds and staffing as a way to address what he calls "the sea of gun violence." "That is why it is urgent that we request the state’s immediate assistance in expanding the number of beds for those in critical need of mental health care, and funding for the medical and support staff they require," he testified.

In Kingston, the removal of psychiatric beds at the height of the pandemic left the city with virtually no local inpatient care, according to Senator Michelle Hinchey, a Democrat who represents the area. "It should not be on the community to figure out how to backfill the beds," she said Monday about the ongoing gap.

Lawmakers over the coming weeks will debate the proposed expansion of Kendra's Law as state budget negotiations unfold ahead of the April 1 start of the new fiscal year. That debate will be closely watched, "but unless we actually have beds for people to go to when they are diagnosed as needing to be in a psychiatric institution it doesn't matter," said Senator Liz Krueger, a Manhattan Democrat and chair of the Senate finance committee, on Monday.

"I think the first step is to reopen the beds that were closed during covid," Sullivan said. A majority of those beds are in upstate regions. New York City has only lost 24 active psychiatric beds in the last four years, Sullivan said, and the city currently has over 1,000.

Governor Kathy Hochul's proposed $216 billion executive budget includes $3.9 billion for OMH, an increase of $577 million, or 17%, from the current fiscal year 2022 budget. The new funding will go towards expanding the OMH workforce, rate changes for rehab services, services for children and families, and a crisis response system.

Lawmakers discussed a number of other topics at the hearing Monday, including the state's new Safe Option Support teams for homelessness outreach, especially in the New York City subway system; mental health supports for children in schools; and incentives to grow the mental health workforce in the state.

Not mentioned was the toll of COVID-19 in state-run psychiatric centers, where at least 55 patients have died since the pandemic began. Earlier this month, Assemblymember Aileen Gunther and Senator Samra Brouk said they planned to raise concerns over conditions in the centers with Sullivan after Gotham Gazette reported the deaths of two more patients in January and the infection of hundreds more. Both were present at Monday's hearing but neither broached the subject.