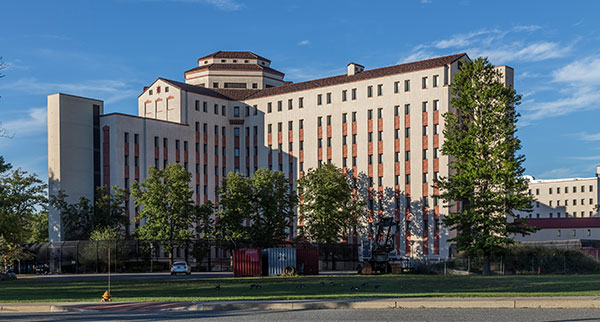 The winter COVID-19 surge in state-run psychiatric centers has continued, killing two patients in January and with roughly 200 patients still infected as of February 2.

The facilities, 24 in all, are home to New Yorkers deemed to have severe mental illnesses that require segregation from the community and/or on-site treatment. There are currently 4,400 people living in close quarters in state-run psychiatric institutions, some with underlying medical conditions, making the facilities more vulnerable to the virus than other congregate settings. Most of those patients are in state custody involuntarily and for indefinite terms, whether or not they entered willingly, under the strictures of the state Mental Hygiene Law.

“OMH mourns the loss of all who have succumbed to the COVID virus over the last two years," wrote James Plastiras, a spokesperson for the state's Office of Mental Health (OMH), in an email. "Although the winter surge and more contagious Omicron variant have increased infection rates across the nation, as well as in some OMH-operated Psychiatric Centers, the infection control measures we implemented and our ongoing attention to encouraging vaccinations have helped us to keep infections, serious illness, and deaths to a minimum among the 11,589 vulnerable patients served in our in our facilities since the pandemic began.” (The figure refers to the combined number of people in in-patient and residential programs.)

The two January deaths occurred from separate facilities, Rockland Psychiatric Center and Buffalo Psychiatric Center – two large hospitals that both saw small outbreaks in the first three weeks of January, according to state data. They are the first confirmed covid-related state psychiatric patient deaths since the fall.

A vast majority of COVID-19 deaths in OMH's in-patient facilities occurred in the first year of the pandemic when state regulators struggled to keep up with the myriad challenges posed by the airborne disease. The biggest single leap was in April of 2020, when the virus killed 20 people under state psychiatric care in the span of a week. Since then, OMH has seen a steady trickle of fatalities.

The winter surge in state psychiatric centers peaked at over 300 positive cases in mid-January. While the numbers in many facilities have fallen in recent weeks, 19 centers still have confirmed cases in their wards and five have over a dozen. Creedmoor Psychiatric Center in Queens, the largest in the system, had 41 covid-positive patients out of 471 total patients, down from 71 positive patients last week.

This winter, OMH activated many of the same precautions it has taken on and off throughout the pandemic – limiting visitation, distributing personal protective equipment, disinfection, screening for symptoms, and postponing nonessential training, according to Plastiras.

The state requires employees to be vaccinated. Visitors must show proof of vaccination or a negative test in counties with a seven-day test positive rate above 3%, which included all but Rockland County as of February 3.

Facilities encourage social distancing "when possible," but that can be difficult in the few available shared spaces and dining halls. During the surge, patients in some facilities would eat in their living quarters when the virus was detected in their unit.

Psychiatric facilities are also testing patients and staff "regularly," Plastiras said. Since December 2020, the agency has administered over 313,000 rapid tests. But at Rockland Psychiatric Center, where one patient died last month, only two units a day on average were being tested in January, according to one employee who spoke anonymously. With 13 units, that means a unit could go an entire week without being tested. Staff who, at the beginning of January, had daily access to testing at work are now encouraged to be tested no more than twice per week.

"Testing is very very important," Assembly Member Aileen Gunther, chair of her chamber's mental health committee, told Gotham Gazette. "Do you do it on a daily basis, every other day– how often? That's really for an Ann Sullivan to make that call on how frequent the testing is," she said, referring to the head of OMH.

"The most important thing that you can do is infection control precautions. You have to really have due diligence," she added. "Unfortunately a lot of these places have a staffing shortage on top of it all."

Asked whether the Legislature has held any oversight hearings on COVID-19 in psychiatric centers, where Commissioner Ann Marie Sullivan or other OMH officials would have to testify, Gunther couldn't say.

"I haven't been involved in any. I don't really think that we have had that but it's actually a good suggestion," said the Sullivan County Democrat. "I think that sometimes what happens is that we do it afterward [but] it seems that this is not going away," she said of the virus. "It's actually a great idea and I will bring that up to the commissioner."

In a statement to Gotham Gazette, State Senator Samra Brouk, a Rochester Democrat and the Senate's mental health chair, wrote: "As Omicron and other highly contagious strains of COVID-19 spread across the state, we must take care to protect at-risk, vulnerable populations, including those living in in-patient psychiatric centers. My office is actively looking into the conditions at such facilities because needing the care provided by an in-patient mental health facility should not mean putting yourself at risk to disease."

When asked about holding oversight hearings on conditions in psychiatric centers, a spokesperson for Brouk, Frank Sainato, wrote by email: "There has not been a hearing on this specific issue, though our office has been in regular contact with OMH and our legislative colleagues throughout the pandemic. We are concerned about the spread of COVID-19 among those in congregate settings and are committed to ensuring patients receiving care in any state-run facility are kept safe from COVID-19 and other communicable diseases. Senator Brouk is looking into this."

A Ward of the State
Rockland Psychiatric is one of the largest state centers with roughly 470 patients. It had a relatively small covid outbreak of just over a dozen cases at the beginning of January, which has shrunk since then. But by the third week in January, one patient had died of the virus.

In the same span of time, Buffalo Psychiatric Center, a 230-patient facility, saw at least nine patients contract the virus and another die from it.

Both facilities house people who came into state custody through the criminal legal system, including people who may have pleaded not guilty or were found unfit to stand trial because of mental incompetence. Carceral settings like prisons and jails have become the focus of activists seeking the swifter release of detainees, in part because of the dangers of COVID-19 in cramped congregate sites.

Patients in psychiatric centers run by OMH are ten times more likely to be killed by COVID-19 than people held in state prisons, available data shows. They tend to be older and have more medical conditions than prison populations, and their movement is less restricted making it easier to spread the virus, according to Plastiras, who called it a "false comparison." While criminal justice advocates have decried a "humanitarian crisis" unfolding in prisons and jails, like Rikers Island, little attention has been paid to conditions in psychiatric centers.

“So many of those impacted are being held in these facilities involuntarily, pending civil commitment determinations, many of them linked to unresolved criminal charges,” said Marc Fliedner, director of the mental illness program at Disability Rights New York, a federal-mandated legal advocate for people with disabilities.

“These individuals are languishing in what amounts to a carceral existence, disproportionately exposed to risk of serious illness or death from COVID-19 on a daily basis," wrote Fliedner, a former prosecutor and candidate for Brooklyn then Manhattan District Attorney, in an email. "They would be far safer if they were living in the community, but development and sustainment of safe community alternatives has simply not been prioritized in New York State.”

For all OMH in-patients, whether civilly or criminally committed, discharge is decided by a judge relying heavily on the recommendations of facility doctors. In those proceedings, patients are represented by a lawyer appointed from the state's Mental Hygiene Legal Services and independent doctors are rarely called in to testify – a practice that has raised alarms among civil rights attorneys. The average length of stay for people discharged in 2020 was 14 months, around 60 days longer than the year prior, according to data shared by OMH. Many patients are committed for years.

The current surge among patients and staff in many facilities has followed an uptick in the general population. But in one OMH center housing patients of a unique "quasi-criminal" profile – the Secure Treatment and Rehabilitation Center (STARC) outside of Utica – the numbers of infected patients began to grow, not shrink, in the last days of January into February.

STARC contains people who have been "civilly confined" under a 2007 law enacted under Governor Eliot Spitzer to prolong the custody of sex offenders after they've completed their criminal sentence. The law empowers the State Attorney General to seek confinement (or a form of "strict and intensive" parole-like supervision) for post-sentence convicts who are alleged to have a "mental abnormality" that predisposes them to commit sex crimes. The decision is made by a judge or jury and revisited by a judge at what are supposed to be annual hearings.

The burden of proof for civil confinement is typically lower than criminal confinement and Mental Hygiene Legal Services lawyers tend to have less access to these individuals once they enter STARC, according to one attorney who has represented defendants in these cases. Release from civil confinement under this law is infrequent and for many it can be a life sentence. There are 366 currently detained in STARC.

"There just aren't the resources for people to get full-on bench trials every year," the attorney said, speaking anonymously because they were not authorized by their employer to speak with press. "I don't think in reality people can really get the experts to have full due process every year."

"It's indefinite in the sense that, only until another judge finds otherwise, they stay under the civil management system," the attorney said, referring to STARC. "Once it gets set in motion nobody wants to undo it, but how reliable are these [mental abnormality] assessments?"

Six people detained in STARC have died since the pandemic began.

In the last two weeks, the OMH in-patient census has increased by 41 patients statewide. The influx mirrors the first wave of the pandemic in the Spring of 2020: OMH centers filled up as medical hospitals cleared psychiatric wards to make room for the flood of covid-positive patients in intensive care. At the time, facilities were forced to accept covid-positive patients from overwhelmed hospitals.

STARC saw 3 new patients last month, though data shows infection among patients was already rising before they were reported in the census.