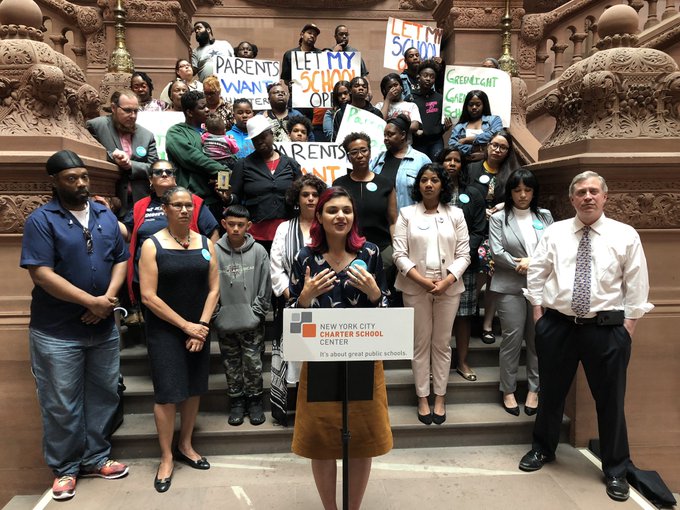 A past rally for charter schools with James Merriman, right (photo: @nyccharters)

“We have a lot more friends in private than we do in public,” James Merriman, the CEO of the New York City Charter School Center, told host Ben Max in a recent conversation on Gotham Gazette’s Max Politics podcast. Half-joking about the political environment related to charter schools in New York, Merriman outlined the current duality for the controversial sector of privately-run public schools: they are wildly popular, especially among Black and Latino families unhappy with their district schools, but they face significant skepticism and barriers to further expansion.

Merriman joined the podcast to discuss the virtues of and address concerns about New York City’s charter school sector, and assess the political landscape as he and other charter school supporters seek a lifting of the state cap, which has been hit, on the number of charters in New York City. Despite that cap, existing charters continue to grow as they add grade levels each year and expand enrollment.

The growth of charter schools, particularly in New York City, has remained divisive in education circles and beyond, a long-standing hot-button political issue that is often debated as part of policy decisions and elections. Most charter schools are allowed to operate outside the purview of the New York City Department of Education and the vast majority of charter schools do not employ unionized staff. Though the schools receive public authorization and funding, they are privately run and their budgets are often complemented by massive philanthropic fundraising, especially among the big networks like Success Academy, the largest and most controversial.

In New York City, the roughly 270 charter schools are now responsible for the education of over 140,000 students, 90% of them Black or Hispanic.

Merriman has led the New York City Charter School Center for well over a decade, a time period of significant fluctuation in the charter school movement’s political fortunes in New York. In terms of top officeholders, the sector has lost champions like former Mayor Michael Bloomberg and former Governor Andrew Cuomo, but has now seen former Mayor Bill de Blasio, an outspoken charter school opponent, replaced by a charter-friendly Mayor Eric Adams, who has said he wants to see more charters allowed to open in the city. Governor Kathy Hochul has kept the issue of charter school expansion at arm’s length. The sector has also in recent years lost longtime champions in the State Senate Republican majority that was a force behind its expansion for years.

Along with advocating for the growth of the sector, the NYC Charter School Center works to help schools get started, support existing schools, and drum up political support.

In speaking on the virtues of charter schools, Merriman framed the conversation around bringing school choice to low-income families. The idea, he said, is to “break that monopoly and give low-income folks the opportunity to choose in a way that middle-class people like myself take for granted.”

If a student is born where the district school is not a good school or not the right fit, without charter schools, that student is forced to remain at that school, unless their family has the means to pick up and move to a different district or enrollment zone, Merriman said. Simply put, Merriman said, many New York City public schools in lower-income communities are not providing a strong enough education and parents are seeking out alternatives, where charter schools often come in, and that’s why 80% of charter school students are low-income.

While in some places, charter schools remain the sort-of “small lab” concept aimed at giving educators freedom to try out new styles of pedagogy, as originally intended in New York City, they have largely grown into a large, alternative sector, Merriman explained, giving a lifeline to hundreds of thousands of families.

While Merriman acknowledged that there are some charter schools that similarly fall short, those schools will close, he says, whereas the district schools will continue on operating the same way. “Parents see that charter schools have a mission-driven view that the children that they enroll need to reach certain benchmarks and see certain achievements if they’re even to hope to participate fully in their economic and social life when they reach adulthood,” Merriman explained on the podcast.

So what makes the difference? Is it the resources? The freedom from teachers union contracts? Merriman pointed to that freedom from union contract and district rules, as well as the ability to attract many strong school leaders. The ability to work with teachers directly and to not abide by a collective bargaining agreement that “literally rules every second of every day” is critical, he said, as is the ability for a principal to hire the team they want and fire those teachers that don’t work out.

Merriman also referenced control of the budget and stability so as not to run every which way when a new superintendent is hired as factors important to the success of charter schools. Asked about the high rates of teacher attrition, Merriman noted that low-income children experience a lot of teacher turnover whether in district or charter schools.

The true success of any school, but particularly a charter, Merriman said, lies in the ability to attract and retain quality leadership. “No matter how talented a group of teachers you may have,” he explained, “I think most teachers would agree they need a great leader to bind them together in a common mission.” In fact, Merriman called the shortage of what he sees as high-quality leaders, “the scary part of public education.”

Since there is a state cap on the number of charters that can be issued for schools, and a sub cap in New York City of 290, which has already been hit, the proliferation of charter schools in the city is on pause, though existing charters do continue to expand.

Merriman hopes to change that but acknowledges it will be an uphill battle. “It’s tough out there — we need to persuade more folks in Albany in both the Assembly and the Senate that this is worth doing,” he said on the podcast.

For his part, Mayor Adams has called for the reissuing of 21 charters that were given to what are now referred to as “zombie charters,” schools that have ceased to run. Merriman called this an easy and common sense step and signaled gratitude for the mayor’s willingness to get it done.

There are groups of educators and social service agencies that are ready to start new schools, Merriman said, and the center has its eyes on increasing the number of schools headed up by people of color. The fight to increase the overall charter school cap is a bit more complicated though – and Merriman says a lot of that has to do with the United Federation of Teachers, the city’s politically-potent teachers union.

“A vote in favor of charters is considered an enemy act on the part of the legislator,” Merriman said of representatives in Albany and the UFT, which he said has threatened lawmakers with primary challenges if they support charter schools. His movement, right now, just doesn’t have the same political heft, money, or organizing power, he acknowledged.

“The number of substantive conversations that we’ve had with legislators is very very few,” Merriman explained. At Max’s suggestion of more public hearings, Merriman said the real nuanced and thoughtful conversations on the issue happen most often more quietly in someone’s office with experts who can really dig into the data.

As for the wild care of Governor Hochul, Merriman said he wouldn’t make any assumptions on her stance, preferring to let her speak on the issue while he looks to continue to build support.

As for broader education reform, Merriman acknowledged he’s not an educator himself and that he doesn’t like amateurism, but offered the idea of more principal autonomy, as well as a move toward content-rich curriculum including a science of reading and, explicitly, phonics instruction. These principles are shared by the Adams administration, it appears, as new schools Chancellor David Banks has indicated support for them in a speech laying out his vision not long after Merriman spoke on the podcast.

Merriman expressed optimism about Adams and Banks, and reiterated the need to refocus on student achievement, which both city leaders have also cited as a priority.

The conversation wound down with a question on recent discipline reckonings within the charter school community, especially with regard to the record of Success Academy, the city’s largest charter network with long lists of both impressive academic statistics and troublesome policies and allegations. Merriman acknowledged it was an issue and an ongoing conversation within the sector. It is important to meet students where they are, he said, and also to build a culture of discipline so that students can feel a sense of safety and security in their school buildings.

“The only thing I want folks to do is to go visit charter schools,” Merriman said. The leaders and teachers love to have visitors, he assured, before expressing the desire that voters and city residents see “it’s just New Yorkers educating New Yorkers.”

[Listen to the full conversation: Max Politics Podcast: The Growth of Charter Schools in New York City, with James Merriman]