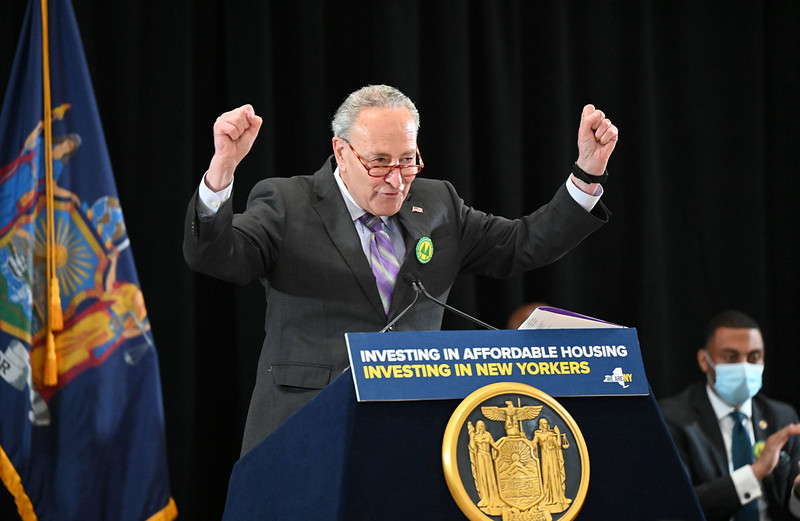 ***Update: The Senate passed the Inflation Reduction Act in a party-line vote on Sunday, August 7, though with some changes since the original deal was announced by Senate Majority Leader Schumer and Senator Manchin. The final agreement included a narrower corporate minimum tax and dropped the closure of the carried interest loophole, at the urging of Senator Kyrsten Sinema, though Schumer added an excise tax on stock buybacks to the bill. Republicans, on the other hand, blocked a cap on the price of insulin under private insurance. Below is the original article published by Gotham Gazette soon after the Schumer/Manchin deal was announced looking especially at the climate aspects of the package and how they may boost New York's related ongoing efforts.***

U.S. Senate Majority Leader Chuck Schumer of New York and Senator Joe Manchin of West Virginia on Thursday announced a surprise deal on a massive budget reconciliation bill that, if passed, is likely to have major implications for New York.

The package would invest hundreds of billions of dollars across the country in energy, climate action, and health care; raise revenue through a minimum corporate tax rate and greater IRS enforcement; and create savings by lowering drug prices and other measures.

The Inflation Reduction Act, as it is being called, would invest about $369 billion in energy infrastructure and combating climate change, and another $64 billion to extend Affordable Care Act subsidies to 2025, according to a one-page summary released by Senate Democrats.

“The Inflation Reduction Act of 2022 will be the largest package to fight the climate crisis ever passed by Congress,” Schumer tweeted on Sunday.

It would ultimately reduce the federal deficit by $300 billion, a major Manchin priority, by raising about $739 billion through several measures, including $313 billion from a 15% minimum corporate tax, $288 billion from prescription drug pricing reform, $124 billion through enhanced IRS enforcement, and $14 billion by closing the carried interest loophole.

Though the package represents a pared down version of President Joe Biden’s $3 trillion “Build Back Better” proposal that passed the House of Representatives, it nonetheless has the crucial support of Manchin, a centrist Democrat who has been a key holdout in the Senate opposing Democratic spending proposals. The bill does make concessions to the fossil fuel industry – including provisions that allow oil and gas drilling on public lands and offshore waters – which Manchin is closely tied to.

“After years of many in Washington promising, but failing to deliver, with the Inflation Reduction Act of 2022, this Senate Democratic Majority will take action to finally take on Big Pharma and lower prescription drug prices, tackle the climate crisis with urgency and vigor, ensure the wealthiest corporations and individuals pay their fair share in taxes, and reduce the deficit,” Schumer said in a statement announcing the deal with Manchin. “By a wide margin, this legislation will be the greatest pro-climate legislation that has ever been passed by Congress. This legislation fights the climate crisis with the urgency the situation demands and puts the U.S. on a path to roughly 40% emissions reductions by 2030, all while creating new good-paying jobs in the near and long-term.”

A version of the new agreement will have to garner the support of at least 50 senators, likely all Democrats (because it is part of a budget reconciliation, it will not be subject to the filibuster rules that in most other cases necessitate 60 senators in favor) and a majority in the House of Representatives. While neither is a sure thing, Democrats appear hopeful that they can notch a set of significant victories for the American people and do so ahead of the upcoming midterm elections.

“Rather than risking more inflation with trillions in new spending, this bill will cut the inflation taxes Americans are paying, lower the cost of health insurance and prescription drugs, and ensure our country invests in the energy security and climate change solutions we need to remain a global superpower through innovation rather than elimination,” Manchin said in a statement on Thursday.

In remarks at the White House, Biden said the bill will lower health care costs for millions of Americans and is “the most important investment that we’ve ever made in our energy security, and developing cost savings and job-creating clean energy solutions for the future. It’s a big deal.”

The main component of the bill is the hundreds of billions dedicated to cutting energy costs that are a key driver of inflation, while encouraging a transition to renewable energy through tax credits, production grants and rebates.

The bill also invests $60 billion in environmental justice efforts including $3 billion in block grants for community projects in disadvantaged communities, $3 billion for equitable and affordable transportation access, $3 billion to reduce pollution at ports, and $1 billion for clean heavy-duty vehicles such as school and transit buses and garbage trucks. Together, all those steps and more are meant to cut national greenhouse gas emissions 40% by 2030.

Some experts Gotham Gazette contacted did say, however, that it’s too early to say how much funding might flow to New York City under the bill. But given the amount of funding and the ongoing climate efforts in New York, the state and city will likely get significant allocations from the IRA.

Neither Mayor Eric Adams’ office nor Governor Kathy Hochul’s office responded to requests for comment for this article, and neither has issued a public statement about the deal Schumer and Manchin announced last week.

“We've been saying for over a year now, these kinds of investments would alleviate price pressures on households,” said Lauren Melodia, Deputy Director for Economic & Fiscal Policies at The New School’s Center for NYC Affairs, in a phone interview.

Melodia said the climate investments in the Inflation Reduction Act are “going to be awesome for everyone in New York City.”

“I know that we've got a city that's committed to fighting climate change. So hopefully, we can get all of our city agencies and partner organizations helping people figure out how to take advantage of this,” she said. New York City is currently in the process of accessing and applying for more than $10 billion in infrastructure funds from the $1.2 trillion Infrastructure Investment and Jobs Act enacted in November 2021. The act will funnel up to $27 billion to New York State alone.

The environmental justice investments in the new federal package could be crucial for New York City, in particular. “There’s a lot of opportunity and eligibility here in New York City communities that have been dealing with environmental racism for decades,” said Melodia. “I think that we’ve got a lot of that here unfortunately.”

But Melodia also noted that the bill won’t be an immediate salve to the country's woes. “Is this going to bring down inflation overnight? Absolutely not but it is the right kind of investment to make.”

Environmental advocates also celebrated the deal’s investment in fighting climate change, though some had reservations about aspects of the package.

“These investments will accelerate our transition to a green energy economy and are long overdue as inflation, high energy costs, and extreme weather continue to hurt New Yorkers,” said Julie Tighe, President of the New York League of Conservation Voters, in a statement. “Now, we need the Senate to pass this bill to stand up for climate, clean energy, jobs, justice and help save families money at this crucial moment.”

New York State is currently in the process of implementing the Climate Leadership and Community Protection Act (CLCPA) of 2019, which sets the state on the path to cutting economy-wide greenhouse gas emissions by 40% by 2030 and by 85% by 2050, while also creating green jobs and investing in environmental justice communities.

The state’s Climate Action Council, created by the CLCPA and tasked with planning its implementation, released a draft scoping plan to achieve those targets earlier this year and is required to publish its final plan by January 2023. But crucial questions have been raised about how the state will fund the transition towards a green economy, and federal funding could be essential.

In a joint op-ed in LoHud/USA Today last week, just before the deal on the IRA was announced, Basil Seggos, commissioner of the New York State Department of Environmental Conservation, and Doreen Harris, president and CEO of the New York State Energy Research & Development Authority, called on Congress to return to the negotiating table while pledging to continue taking action locally.

“The President has proposed a national climate strategy that would reduce emissions, create millions of good-paying jobs, and help make the country more resilient in the face of severe weather. Inaction is simply not an option,” wrote the pair, who are appointees of the governor and the co-chairs of the Climate Action Council.

“The Intergovernmental Panel on Climate Change reports that there is still time to act, but it must happen immediately,” they added. “The world needs robust American leadership on climate backed by strong federal laws and funding. New York stands ready to partner with Biden, Congress, and our sister states on the urgent agenda ahead. This may be our one shot.”

At the same time, New York City is pursuing climate goals. The city is preparing to implement Local Law 97, which was part of the Climate Mobilization Act of 2019, dubbed a “Green New Deal” for the city. It is also facing implementation questions that the federal bill, if passed, could help with.

Starting in 2024, Local Law 97 will set emissions caps for the city’s largest buildings, which are also its largest polluters, to cut their emissions by 40% by 2030 and by 80% by 2050. Regulations to meet those mandates are currently being written by the Adams administration.

Comptroller Lander’s office has also outlined various measures that the city could take to expedite the transition to clean energy, including retiring gas power plants and transforming them into clean energy hubs, incentivizing electric vehicles and solar panels, and prioritizing electrification and decarbonization in low-income and environmental justice communities. All of those steps could be achieved with the funding proposed in the IRA.

Dana Johnson, Senior Director of Strategy and Federal Policy, of WE ACT for Environmental Justice, noted in a statement that the bill would deliver “once-in-a-generation investments needed to make communities of color and areas of low income healthier, cleaner, and economically viable.” But Johnson expressed concerns about provisions of the bill for offshore oil drilling, carbon capture, nuclear energy, hydrogen, and logging on public lands.

“These line items continue practices that are not aligned with centering overburdened communities in decision-making or transitioning away from fossil fuels,” Johnson said. “These credits can be more effectively invested in renewable energy generation and other programs that ensure an energy transition that protects people and addresses climate change.”