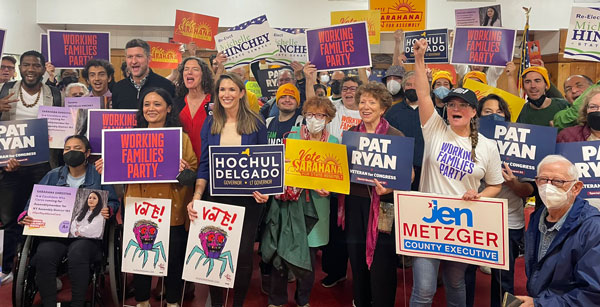 “The Working Families Party is proud to have secured more than enough votes to maintain our ballot line and continue fighting for working New Yorkers. Our grassroots volunteers mobilized voters from across the state to reject far-right extremism and vote for a New York that invests in working people by casting their ballot for Kathy Hochul and Antonio Delgado on the WFP ballot line. Against enormous obstacles—including an onslaught of spending from billionaires and dark money PACs—we once again beat the odds and showed the strength of our progressive movement. With a focus on the real issues facing working New Yorkers, we were able to turn out voters in every corner of the state. Now Governor Hochul and our statewide leaders must act—and act swiftly—to deliver for the working New Yorkers and communities of color who carried them to victory. Our state can provide much-needed relief to working families by making deep investments in affordable housing, lowering utility costs through publicly-owned utilities, investing in our SUNY and public college system, and moving meaningfully toward universal child care and health care. New Yorkers want leadership that will have their backs, and we’re ready to partner with our statewide leaders to chart a bold path forward.”

Leaders of the Working Families and Conservative parties are again pushing New Yorkers to cast votes for their top-of-the-ticket nominees in high enough numbers to keep their ballot lines in future elections.

Thanks to state rules adopted in 2020, every political party nominee for President and Governor must receive the greater of 2% of the statewide vote total or 130,000 votes in order for the party to keep a guaranteed spot on the ballot. Previously, political parties had to garner just 50,000 votes for their nominee for governor every four years.

This year as in other recent general elections, the Conservative Party has nominated the Republican ticket – U.S. Rep Lee Zeldin for governor and his lieutenant governor running-mate Alison Esposito, a recently-retired NYPD deputy inspector – thanks to a system called fusion voting, which allows candidates to run on multiple ballot lines. The Working Families Party likewise has nominated the Democratic ticket – Governor Kathy Hochul and Lieutenant Governor Antonio Delgado, as it has done in previous election cycles, even after backing other candidates in the Democratic primary.

"I anticipate a banner year. I would not at all be shocked if we ended up with 300,000 votes," said Conservative Party Chair Gerard Kassar in an interview with Gotham Gazette. "We are certainly going to end up well over the 130,000 and I feel very good about us surpassing the Working Families Party in votes too."

The party is banking on the momentum Zeldin has built over the course of his campaign, as well as many competitive races for Congress and State Senate, and frustrations with government under Democratic leadership.

The Working Families Party is hoping to remain on the ballot as a more progressive check on the State Democratic Party. According to WFP New York Chair Sochie Nnaemeka, the party is aiming to get 200,000 votes this year – fewer than in the high-turnout 2020 presidential election and more than the 2018 gubernatorial election, which also saw higher-than-usual turnout.

"We are not taking anything for granted in this moment because we have to protect our progressive party in New York State, and we have to defeat right wing extremism in New York," Nnaemeka said in a recent podcast interview with Gotham Gazette. "We are progressives. We can chew gum and walk at the same time."

In New York State, where Democrats outnumber Republicans two-to-one, staving off a Zeldin victory will largely come down to Democrats' ability to boost turnout, especially in downstate population centers – New York City and the surrounding suburbs. That could raise the vote threshold needed to keep the ballot line.

"We are really pushing for turnout to be higher, even if it might kind of negatively affect this threshold that was put on us," Nnaemeka said.

The new ballot thresholds are the result of a push from then-Governor Andrew Cuomo, a Democrat, that would kneecap third parties, particularly the Working Families Party, which had become a thorn in his side. The new rules had previously been enacted by a commission, appointed by Cuomo and the Democrat-controlled State Legislature to create a new campaign finance system, and were later thrown out by a State Supreme Court judge. Cuomo and legislators adopted the rules again as part of 2020 state budget legislation to the outrage of third-party supporters and some democracy advocates.

With the higher and more frequent threshold, the state's smaller parties have had to scrape to survive. Several of them didn't make it in the 2020 general election, losing their ballot lines and relying on the vanishingly small write-in turnout to make any mark in the election. Among the now-defunct lines are those of the Green, Libertarian, Reform, and Independence parties.

The Conservative Party was the only camp outside of the Democratic and Republican parties to consistently attract voters at the higher vote threshold before it went into effect in the spring of 2020. In the general election that year, the first race under the new rules, both the Conservative and Working Families parties crossed the finish line with enough votes to preserve their place on the ballot in the 2021 municipal elections and this year's state and congressional contests.

In 2020, 296,000 New York voters for President Donald Trump and Vice President Mike Pence selected their names on the Conservative Party line. That was 3.4% of statewide votes. The Working Families Party, which nominated then-U.S. Senators Joe Biden and Kamala Harris, received 387,000 votes, or 4.5%.

That election marked an unusually high turnout year in New York, spurred in part by opposition to Trump in the heavily Democratic state. In total, roughly 8.7 million New Yorkers, or 64% of registered voters, cast ballots. This year's general election is expected to have far lower turnout overall, creating a less forgiving environment for small parties to earn big vote tallies.

The last time the governorship was on the ballot in the 2018 midterm elections, Marc Molinaro, the Republican Dutchess County Executive, received 254,000 votes on the Conservative Party line, or 4.2% of the vote – well above the current threshold. That year the WFP got just shy of 114,000 votes for Cuomo and his running-mate, Lieutenant Governor Kathy Hochul, or 1.9% of the vote. Had the new rules been in place, the party would have lost its automatic spot on the ballot by about 8,000 votes.

"Our focus right now really is to get progressives, to get young people, get voters of color maybe who might feel disengaged by the Democratic Party to put their lot in with the Democrats on top of the ticket right now and to do so while also voting their values," Nnaemeka said.

In the Democratic gubernatorial primary earlier this year, the WFP endorsed New York City Public Advocate Jumaane Williams for Governor and his running-mate, progressive activist Ana María Archila, for lieutenant governor. Now, there are few signs that it has built significant bridges with Hochul beyond endorsing her in the general election. There has been no unity event and no indication that Hochul’s campaign is working to help the party reach its ballot minimum, but the party is mobilizing its followers to vote for Hochul on its ballot line, which could help both survive.

"Should she be asked, she'll say that she's on the Working Families Party line," Nnaemeka said when asked what the governor is doing to support the WFP.

The WFP is pushing for state legislation to change the ballot-access rules once again, Nnaemeka said on the podcast. Under the proposal, parties would need to receive the lesser of 130,000 votes and 2% of the overall vote share for any statewide office every four years, not the current greater every two years.

"We know that we can meet these numbers, which I think is why the urgency perhaps has been lessened from a legislative standpoint. However, we believe that these laws are bad for democracy," Nnaemeka said.

Out of 13.1 million registered voters, there were 163,000 enrolled Conservative Party members and 51,000 WFP members, as of November 1. At 6.5 million, Democrats make up close to half of all registered voters compared with 2.8 million Republicans, or 22% of potential voters. Unaffiliated New Yorkers account for 23% of enrolled voters.