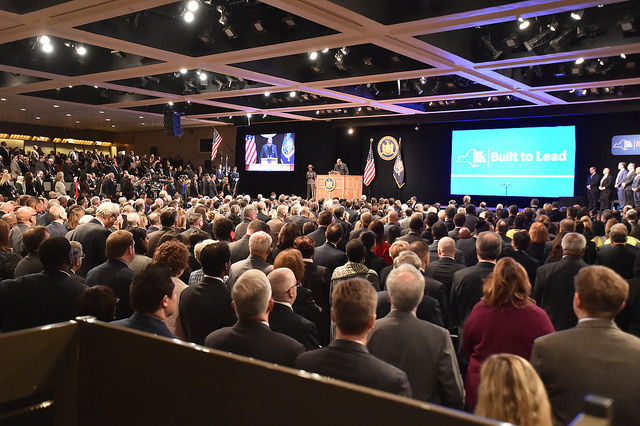 On Tuesday in Albany, the heads of three major good government groups gave their evaluation of the ethics proposals Gov. Andrew Cuomo included in his State of the State address and budget presentation last week. Susan Lerner of Common Cause, Dick Dadey of Citizens Union and Blair Horner of the New York Public Interest Research Group expressed general contentment with most of what Cuomo unveiled during a press conference, but gathered to call for follow through and one key addition to the agenda.

The groups are quite pleased with Cuomo's plan to shut the LLC loophole, which allows donors to skirt the state's campaign contribution limits by creating multiple fronts. "We think the language the governor has proposed is strong and clear, and we do not have any suggestions for strengthening it, so please note that sometimes you can make good government groups happy," said Lerner regarding the loophole. Cuomo has been the greatest benefactor of the current system, though in the past he has expressed a belief that it should be closed while not necessarily fighting for that reform.

Horner said that it was "proper" for Cuomo to put forth a bill limiting lawmakers' outside income to 15 percent of their state salary, which is currently $79,500, but may soon be increased. Still, he expressed disappointment that a measure of the bill that limits legislators from accepting advances from book sales does not apply to the executive branch (Cuomo recently received hundreds of thousands of dollars for penning a memoir). Overall Horner said he thought the proposal would "significantly reduce lawmakers' temptation to use private office for public gain."

"The governor was given a historic opportunity to overhaul the state's campaign finance and election laws and in his State of the State message he largely delivered," said Horner.

Dadey, however, said Cuomo made a grave oversight by not proposing any bill that tackles "slush funds" in the state budget, pots of money that have been abused by legislators, as spotlighted in the cases against former Assembly Speaker Sheldon Silver and former state Senator Malcolm Smith.

Dadey said that the pots of money are "rife with potential for corruption," and said that the governor and the legislature should shed more light on how the money is used. "These lump sums must not be allowed to exist in such large categories...but rather lined out in budget," said Dadey. "If there is a reason for them to continue to exist that needs to be publically disclosed."

The groups praised Cuomo's plan to make reforms to the Joint Commission on Public Ethics, or JCOPE, by making the ethics watchdog subject to public meetings laws and requiring lawmakers to disclose their actual income rather than a range. However, they said Cuomo didn't go far enough and that the structure of the board must be revamped to avoid deadlocks, the Comptroller and Attorney General should be allowed to appoint representatives, and the executive director should not be hired directly from the legislative or executive branches.

Dadey dismissed concerns that Cuomo did not make his ethics package part of his budget bills which would give him the upper hand in negotiations with the legislature. "I think they're so important that they have to stand alone. That's what I would like to think," said Dadey.

The groups had previously introduced a "Clean Conscience Pledge" at the start of the year, asking lawmakers and the governor to sign on to working to do everything they can to pass legislation limiting outside income, closing the LLC loophole, and making clear the purpose and recipients of discretionary funds in the budget.

So far 22 legislators have signed the pledge. Four of the signees are from the 103-member Assembly Democratic Majority, no members of the 31-member Republican Senate Majority have signed, nor has Governor Cuomo, a Democrat.

Asked by Gotham Gazette if they had had discussions with members of the majorities about the pledge or received indications why more legislators have not signed, Horner responded: "These are tough proposals. I think the houses want to process how they're going to respond to the governor's package and the pledge. This is really an opportunity for lawmakers who are often cut out of process to express a point of view. I'm urging them to get on the stick on this quickly to let the public know you want Albany cleaned up and this is the easiest way to show it."

[Related: Cuomo Unveils Ethics Plan to Questions of Follow Through]