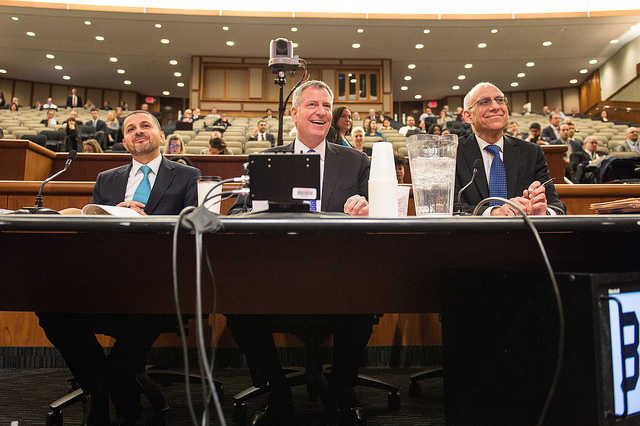 Mayor Bill de Blasio surely wasn't expecting a warm reception in Albany Tuesday, but he walked into an ambush. In front of a bipartisan group of state legislators, de Blasio sat for a grueling, nearly five-hour budget testimony. Senate Republicans peppered the mayor with questions about instituting a property tax cap in the city, taking away from any focus on Gov. Andrew Cuomo's budget proposals that would shift state Medicaid and CUNY costs to the city and changing the political dynamics of the budget dance between the city and state.

The hearing was led by Senate finance chair Sen. Catharine Young, a Republican who appeared determined to push de Blasio on the property tax issue as well as his opposition to the city paying more for CUNY and Medicaid. At least one legislator suggested he would give de Blasio his support in a fight against Cuomo's proposed cost shifts in exchange for the mayor's support for a property tax cap. De Blasio indicated in a brief conversation with reporters later in the day that Republican Senate Majority Leader John Flanagan had told him during their private meeting that he was not proposing such an exchange.

De Blasio pushed back against the proposed two percent tax cap saying that while his budgeting so far has kept well within the parameters of the Senate bill - which, not coincidentally, passed in the chamber while de Blasio was testifying nearby - he is "philosophically" opposed to such a cap.

"One thing I'm adamant about is presenting budgets that do not include a property tax increase," said de Blasio, whose aides were quick to present members of media with data indicating that city homeowners pay the lowest property tax rates in the state and that a cap would cost the city billions in revenue each year.

Traditionally mayors and representatives for localities from across the state travel to the legislature's joint budget hearing on local government to give their evaluations of the governor's proposed budget while pushing for more funding. This year de Blasio was expected to focus on key aspects of his own agenda that need continued funding and the proposals in Cuomo's budget that would shift additional costs onto the city, estimated to cost the city well over one billion dollars annually. De Blasio is also looking to renew mayoral control of schools and advance his affordable housing plan, which hit a major snag when negotiations to renew the 421-a tax break failed.

However, Senate Republicans appeared fixated on keeping de Blasio on the defensive by repeatedly pushing the tax cap proposal. Gov. Andrew Cuomo and the legislature passed a two percent local and school-based property tax cap in 2011, though New York City is the only locality excluded. The property tax cap is the only tax the city controls independently of the state. Both Queens Sen. Tony Avella, of the Independent Democratic Conference, and Republican Sen. Andrew Lanza, of Staten Island, insisted property taxes were driving the middle class out of the city. It was a contention that de Blasio refuted.

In what is sure to be an extremely sensitive topic for the rest of session, de Blasio pressed the legislature to renew mayoral control of schools permanently, or for at least seven years as it had done before he was mayor. De Blasio received just a one year extension last year and Gov. Cuomo has called for a three-year extension.

Last year Senate Republicans held the issue over de Blasio's head seemingly in retribution for his involvement in efforts to help Democrats win the chamber. The policy is now up for renewal again during an election year when de Blasio has indicated he will again help Senate Democrats.

"Successes like these are why there's bipartisan consensus on mayoral control and that is why educators, business leaders, civic leaders alike want it renewed," de Blasio testified. "It would build predictability into the system, which is important for bringing about the deep, long-range change that is needed."

De Blasio also used portions of his testimony to compliment Cuomo on prioritizing supportive housing, affordable housing, an increase in the minimum wage, and a paid family leave proposal. He also praised the continued push for the Dream Act and raising the age of criminal responsibility, two policies the governor and Assembly Democrats have backed, but that have run into opposition in the Republican-controlled Senate.

Sen. Young, who represents parts of western New York, and her colleagues pushed back against complaints de Blasio made about Cuomo's plan to shift costs for Medicaid and CUNY onto the city. She insisted the city is "awash in money right now" and implied that the city gets more than its fair share in Medicaid funding from the state. Sen. Liz Krueger, a Democrat from Manhattan, sought to contradict the assertion when she had time to speak and ask the mayor questions.

"So, Senator Young brought up the amount of Medicaid money New York City gets compared to the rest of the state," said Krueger. "Do we get special rules for New York City? Or is it just a ration of the number of poor people drawing down Medicaid throughout the state, and the New York City share?"

Dean Fuleihan, de Blasio's budget director, responded that the city does not set its rate of Medicaid reimbursement and does not get a rate different than any other municipality in the state.

Krueger continued that strategy of questioning while discussing Cuomo's proposal to shift more costs for CUNY onto the city. "In fact, this proposal that the governor's making, what it does is shift a greater burden to the locality for CUNY students than for SUNY students," said Krueger.

"And is it true that CUNY students are already lower-income on average than SUNY students throughout the state?" Krueger asked. "Correct," said Fuleihan.

Democrats weren't just coming to de Blasio's defense, though. Sen. Bill Perkins pressed the mayor on his relationship with charter schools, while others expressed concerns that his housing plans could lead to gentrification and wondered about the efficacy of the 421-a program, which de Blasio wants to see renewed, albeit with his desired changes.

Toward the end of the hearing de Blasio and Young appeared to try to find common ground on housing despite the fact that Young said that she would like to see an end to affordable housing regulations.

Young encouraged de Blasio to tackle the shortage of affordable housing. De Blasio responded by pointing to 421-a. "We think there is a solution available given the plan we put forward that had widespread support," said de Blasio, referencing his plan to renew 421-a that was scrapped when Cuomo and the legislature decided to let developers and unions negotiate the wages portion of the bill and they could not come to an agreement.

Young then pushed de Blasio to pick whether he favored the budget from the last fiscal year or the governor's current plan. "There are so many unanswered questions in the current budget, I can't answer that question," de Blasio said. Cuomo has yet to outline how he will pay for major construction projects, including the revamp of Penn Station and the city's airports. The governor also has general outlines of housing plans that his policy book promises will be fleshed out in the coming weeks. Further, Cuomo indicated he would abandon plans to shift costs from CUNY and Medicaid to the city if "efficiencies" can be found by the city and state working collaboratively. "There are a lot of elements of this budget we don't have the full facts on," said de Blasio, adding that he was very appreciative of the governor's supportive housing proposal.

Young said it was clear to her that de Blasio should favor this year's proposed budget over last year's enacted. "From what I can see there are significant investments to the city across the board," said Young.