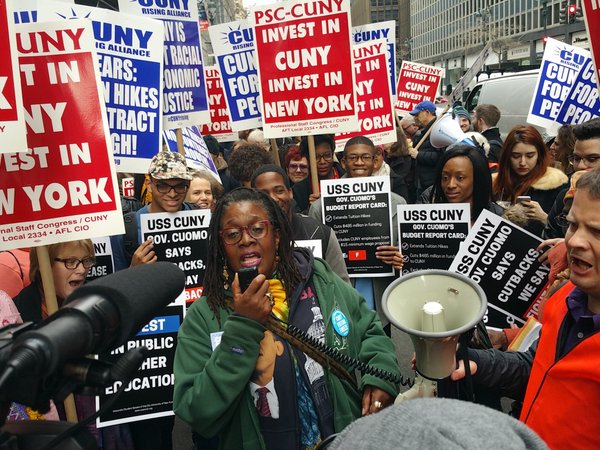 Gov. Andrew Cuomo's budget proposal to have New York City take over $485 million in funding for CUNY still has a number of legislators and advocates on edge despite the administration's repeated attempts to quell concerns. Advocates and faculty held a "die in" at Cuomo's New York City office on Thursday afternoon and a number of legislators say they remain ready to delay the state budget and vote against it should CUNY face any cuts, or cost shifts.

"The governor has said the CUNY budget won't change and I am here today to hold him to his word," Barbara Bowen, president of PSC/CUNY, the system's main labor union, told Gotham Gazette before Thursday's protest. Bowen said the administration had reached out to her and was "insistent on their message."

More than 40 protesters were eventually arrested at the rally, which was over general cost shifts, a push for increased funding, and the expired faculty union contract.

Facing backlash for the cost-shifting proposal after he unveiled it in January, Cuomo said that the state budget wouldn't "cost CUNY a penny" and that his administration would team with City Hall to find "efficiencies." However, when the time for 30-day amendments to the governor's fiscal year 2017 budget proposal rolled around, the proposed cost shift remained. The de Blasio administration has indicated it has yet to have detailed discussions about savings with the Cuomo administration. CUNY is a joint city-state system.

"It is appalling that the faculty union and for-hire political advocacy groups are knowingly misleading their members and the public to score cheap political points." Cuomo spokesperson Dani Lever told Gotham Gazette. "We have said repeatedly and unequivocally that CUNY will receive its full $1.6 billion in state aid this year. Further, the Governor has urged CUNY and its faculty union to resolve their current contract negotiations. The fact that these groups are ignoring reality is alarming, irresponsible, and a flagrant disregard for the students they claim to advocate for. Rather than using unfounded and untruthful scare tactics to lie to the public, they should support the Governor's fight to direct more funding to students instead of administrative costs."

Lever did not respond to questions about whether the de Blasio administration was involved in finding efficiencies at CUNY. De Blasio's team also failed to respond to a request for comment. When asked recently, de Blasio has only said in general terms that he and his aides continue to talk with the governor and his team.

As outcry mounted earlier this month, Cuomo and State Director of Operations Jim Malatras said they will hire a management expert to find cost savings in management at CUNY and SUNY. Cuomo stressed that the administration was looking to shave administrative costs at CUNY during a press conference in Manhattan on March 17.

"These are back office savings," Cuomo said. "They have nothing to do with students in classrooms. As a matter of fact, if you reduce the money you're spending in the back office, you can do better and do more with students."

Some legislators say they have approached the administration for clarity. They have asked questions about what Cuomo's intentions are, whether the management expert precludes negotiations with the city, whether the administration is still looking for the city to pay more of a share of CUNY costs, and whether a $240 million pot of cash Cuomo put aside in his budget to help cover retroactive pay raises for CUNY staff would remain if the operating cost transfer is restored. They say they were referred to previous statements and not given any particular clarity on the situation.

When asked about the $240 million for retroactive raises administration officials said that it was "out of our hands" because CUNY is in mediation with its union. They further indicated that all interested parties are involved in looking for efficiencies at CUNY, but that the current plan is for a management expert to look for efficiencies to be included in next year's budget (fiscal year 2018).

"This year's executive budget proposal ensures that CUNY will receive full funding," said Malatras in a statement sent out on March 16. "The $1.6 billion in aid it receives has not changed, and will not change under this budget. The funding stays constant. CUNY supports hundreds of thousands of students, many of whom are new to our state or our country, or are the first in their family to attend college. The Governor's commitment to supporting those students and the institution that serves them could not be stronger, and his budget proposal reflects that reality."

The question is not necessarily whether CUNY will be fully funded, but whether the state budget will indeed shift hundreds of millions of dollars in CUNY costs onto the city. The implications of that shift are not immediately clear - the de Blasio administration insists it would be devastating.

Some rank-and-file legislators who aren't privy to the backroom budget negotiations among Cuomo and majority leaders of the two houses harbor a deep mistrust of the administration's plans. They see the proposal as an attack on the city, motivated by the governor's feud with de Blasio, as well as a negotiating tactic that gives Cuomo more leverage over Assembly Democrats.

"Actions speak louder than words. We have a document that we have to deal with that tells us CUNY is going to be cut by nearly half-a-billion dollars," Sen. Gustavo Rivera, a Bronx Democrat, said of the governor's budget proposal. "It may be off the table but we don't know. They didn't take it out of the budget with 30-day amendments, so as far as we're concerned it's in play."

The Assembly, which is controlled by Democrats, did not include the cost shifts in its one-house budget. The Republican-controlled Senate's budget supports Cuomo's cost shift. De Blasio opted not to include the shifts in his preliminary city budget proposal, saying that he was taking the governor at his word that the "efficiencies" wouldn't cost the city any money. The state budget is due by April 1, the city budget by July.

Malatras told The New York Times in a recent interview that the governor's proposal was a negotiating tactic to get City Hall and CUNY to take reforms seriously. "The only way you compel change sometimes is where you put financial skin in the game," Malatras said.

"You don't start a conversation by punching someone in the face." Sen. Rivera countered. "We are talking about a cut to an essential service that provides people with a future. CUNY serves 70 percent students of color and 40 percent immigrants. I'm not sure why anyone would put it in the budget. You don't start a conversation by saying 'Here you have to come up with $485 million to fund an essential service.'"

Assembly Speaker Carl Heastie, also a Bronx Democrat, has been adamant that the governor's proposal will not remain.

"It looks like the Cuomo administration was wishing, hoping, praying that City Hall was going to pick up the tab," said Sen. Liz Krueger, a Manhattan Democrat who has been outspoken against the cost shift. Krueger said she now believes the proposal is off the table but said, "I think people should be concerned."

Advocates and legislators say that Cuomo's proposal has created outrage and debate about education funding that they doubt the governor anticipated. "This has sparked a public conversation about CUNY," said Bowen. "But that conversation won't be adequate if all it decides is whether it will be cut and funding is restored to where it was. Because the state funding level is not adequate."

Bowen said that state funding for CUNY remains at "recession levels." She and her allies are now pushing for several budget demands. They say per-student state funding has fallen by three percent under Cuomo.

"I hope to see a final enacted budget with no cost shift," Bowen said, "that also includes at least $240 million for retroactive raises, that freezes tuition, and has provision that will have state funding increase every year to be constant with inflation."