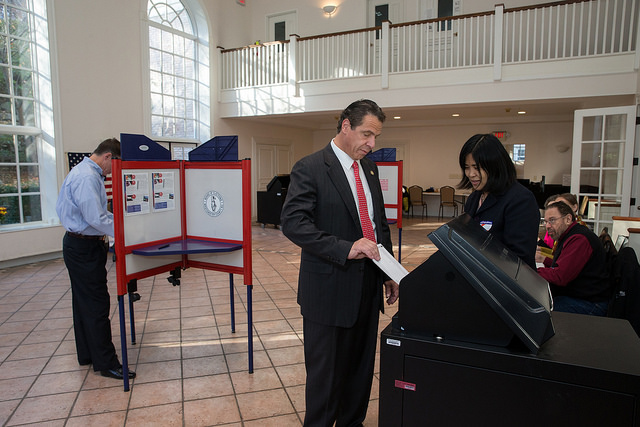 During his State of the State tour early this month, Governor Andrew Cuomo proposed a trio of major reforms hailed as important steps toward modernizing New York’s antiquated electoral system and increasing the state’s paltry voter turnout. While they are long-called for proposals that many are pleased to see Cuomo promote, implementing these goals could be more complicated than it may seem.

Two of the three reforms, early voting and automatic voter registration, were outlined in Cuomo’s 2016 agenda, but the initiatives failed to move through the Legislature last year due to opposition from Senate Republicans, who control that chamber. It is a power structure that continues into the 2017 session, meaning the road to passage is uphill, and steeply so.

New York is one of only about a dozen states without some semblance of early voting. While the state already has a form of automatic voter registration through the Department of Motor Vehicles, Cuomo’s proposal is to streamline and expand the practice. If passed, it would amount to more widespread automatic registration, but not universal.

The third electoral proposal from Cuomo, same-day registration, will likely require a constitutional amendment -- meaning approval from two consecutive classes of the state Legislature, then voters via ballot referendum -- a process that would take at least three years. There is some debate among constitutional law experts over whether such an amendment is required for any form of same-day registration, which would allow voters to show up at the polls to both register and vote on the same day.

The three reforms are almost universally seen as long overdue in New York. Voter turnout in New York is especially poor: in 2014, the state ranked 49th of the country’s 50 states. While New York has watched many other states change voting laws to increase access to the ballot, the voter turnout deficit here is growing progressively worse, with just 19.7 percent of eligible voters casting their ballots in the 2016 presidential primaries. Turnout numbers have also consistently declined during gubernatorial elections and, in New York City, during mayoral election years.

“New York is so far behind the curve on election administration that almost anything is an improvement,” said Susan Lerner, executive director of government reform group Common Cause New York. “I think the governor has picked issues that are very good places to start.”

Those with high praise for Cuomo’s 2017 electoral agenda include Attorney General Eric Schneiderman, who, after monitoring the state’s four election days of 2016, issued an exhaustive report with areas for reform at the end of the year.

"I commend Governor Cuomo for proposing common sense reforms to our voting system. I look forward to working with Governor Cuomo, the legislature, and everyday New Yorkers across our state to address the systemic problems in New York's voting laws,” Schneiderman said in a statement. “New York must become a national leader in voting rights by expanding and protecting the rights of all New Yorkers to cast their vote.”

In the statement, Schneiderman also recommended consolidating New York's exhausting voting schedule into a single primary. In 2016, there were three: in April for the presidential race; in June for congressional races; and in September for state legislative races.

While it is still early to speculate exactly how the Legislature will respond to Cuomo’s electoral reform agenda, there are key early markers, process details, and implementation questions ahead of whatever policy debate may occur.

One thing is certain: Democrats in the Assembly, where they have the majority, and in the Senate, where they do not, will be behind the election and voting modernization efforts -- including and beyond Cuomo’s three main proposals. What is less clear is whether the governor will fully push for early voting, automatic voter registration, and same-day registration in budget negotiations, which are just beginning; and whether there is any room for passage in the Republican-controlled Senate, perhaps with the help of the Independent Democratic Conference -- the seven-member body that has formed a ruling coalition with the Senate GOP.

Early Voting
When it comes to early voting, New York is one of just 13 states without some window wherein voters can cast ballots before Election Day.

For several years running, an early voting bill has passed the Assembly, only to be blocked in the Senate.

According to Gov. Cuomo’s 2017 proposal, every county would offer residents access to at least one early voting poll site for every 50,000 residents during the 12 days leading up to Election Day. Voters would be guaranteed eight hours on weekdays and five hours on weekends to cast early ballots, and bipartisan county boards of elections would determine locations of the early poll sites.

While high voter participation would ideally be a bipartisan issue, New York Republicans -- who cling to control of the state Senate by a tiny margin -- have calculated that better ballot access and more participation is likely to turn out Democratic voters, according Senator Michael Gianaris, a Democrat from Queens and outspoken proponent of voting reform.

“These reforms are more necessary than ever and I’m glad they were included in the governor’s presentation, but the problem is Senate Republicans seem to have a personal interest in keeping people from voting,” said Gianaris, a co-sponsor of several packages of electoral legislation. “That's been the biggest hurdle to overcome, because voter restrictions tend to benefit them.”

A spokesperson for Senate Republicans did not return multiple requests for comment.

A natural partner of early voting is absentee voting. In his State of the State policy book, Gov. Cuomo, a second term Democrat, also cited the requirement for absentee ballot voters to provide an excuse, which is written into the state constitution and its removal would require a constitutional amendment.

A bill to remove this requirement from the constitution has passed the Assembly and is, like other voting reforms, awaiting Senate approval.

Senator Joseph Addabbo, who co-sponsored the bill and served as chair of the Senate Election Committee in 2009, said his staff has not looked closely at the governor’s plan yet but expressed hopeful optimism about the governor’s electoral reform agenda.

“I’ll say I can embrace a lot of what he’s proposing and now our legal counsel might look at whether and how it can be implemented,” said Addabbo, a Democrat from Queens. “This is a lot of what we’ve worked on and proposed in 2009. We really go through painstaking measures to determine what is going to get voters to vote.”

In addition to persuading the Senate majority, Cuomo and Assembly Democrats will have to hash out the details with counties, which, while supportive of early voting, want the governor to include a provision for who would foot the bill -- approximately $3 million per year, according to one estimate -- for the additional polling options.

"Despite principled visions on the issue, on the fiscal nature of the cost shift it's unconscionable for the state to be shifting and enacting policies these days in the property-tax-cap era. It should be dead on arrival." Stephen Acquario, executive director of the state Association of Counties, told the USA Today Network.

Automatic Voter Registration
Automatically registering voters when they become eligible or when they come into contact with government agencies is a fairly new concept. Since 2015, automatic voter registration -- which can have different forms and meanings short of universal automatic registration of voters once they become eligible -- has been approved in six states with strong bipartisan support and is taking off across the country, according to the Brennan Center for Justice.

The idea is to shift the onus of registering from the individual to the government. In addition to increasing voter registration in other states, automatic voter registration has been shown to have significant benefits for administrators, reduce costs, and improve the accuracy of electronic poll books.

Cuomo’s proposal, recycled from last year, would automatically register anyone who comes into contact with a state Department of Motor Vehicles, unless the person chooses to opt out. Currently, eligible voters can register through the DMV, but they must provide additional voting information as they apply for DMV services.

Cuomo’s proposed version of automatic registration is preferable to similar bills passed in Oregon and California, which only registers eligible citizens who apply for or renew a driver’s license. However, Cuomo’s plan is not as inclusive as say, that which is outlined in New York’s Voter Empowerment Act, sponsored by Senator Gianaris and Assemblymember Brian Kavanagh, which would enable a variety government agencies to automatically register voters.

The Brennan Center outlines four ways that states can modernize their electoral systems with automatic registration. The first, of course, is by automatically registering anyone who interacts with government offices, unless the person declines registration. The second is portability, which ensures that registered voters remain on the voter rolls even after they move within the state. The third, online access, allows voters to register, check, and update their registration records through a web portal. And fourth, the state should provide a “safety net,” that allows citizens to correct errors on the voter rolls or register before and on Election Day.

Some community groups have raised concerns that tying automatic voter registration to the DMV alone may skew registration number in favor of areas with high rates of car ownership, disproportionality impacting upstate voters over New York City, for example.

Researchers at the Brennan Center are exploring whether data can shed light on the concern that automatic registration through the DMV advantages some groups over others.

“We recognize that this is a serious concern for some important groups and we want to take a close look at this question,” said Chisun Lee, senior counsel at the Brennan Center’s Democracy Program. “We are hopeful that the net benefits for increasing the franchise, and reaching voters who otherwise wouldn't be enrolled, will be positive for all.”

Again, a constitutional amendment is typically at minimum a three-year process which would require two “yes” votes from consecutive Legislatures and the passage of referendum on the following year’s general election ballot.

Alternately, a “yes” vote on the constitutional convention referendum, which will be on the ballot this November, could provide another avenue to remove restrictions and institute reforms like same-day registration.

At this point, 13 states and the District of Columbia have same-day voter registration, and California, Vermont, and Hawaii have approved the provision, though it has not yet been implemented, according to Cuomo’s office.

The upcoming opportunity to amend the state constitution via constitutional convention, which, for New Yorkers, appears as a ballot referendum every 20 years will be November 7, 2017. A constitutional convention is a four-year public process that could result significant changes to the entire document and laws of the state. If New Yorkers say “yes” to a convention on this year’s ballot, a year later, voters will select delegates to participate in the convention; the following year, in 2019, the convention will convene; and voters will be able to vote on any proposed changes the following Election Day.

Like with the electoral and voting reforms Gov. Cuomo has proposed, he has expressed varying degrees of support for a "yes" vote on a constitutional convention, but whether the governor takes significant action will go a long way toward determining the outcome.