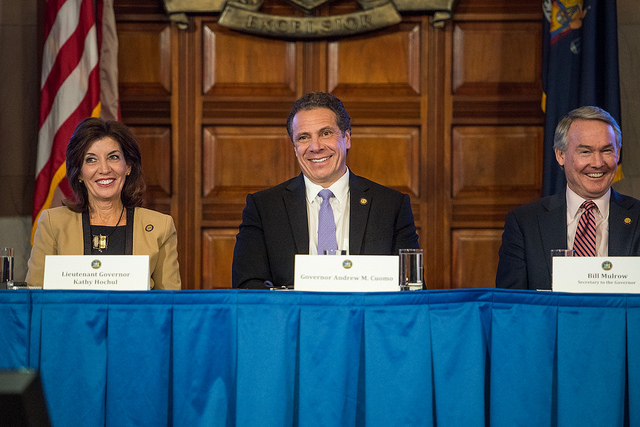 With these remarks, Cuomo positioned himself in stark opposition to Preet Bharara, the U.S. Attorney for the Southern District of New York, who has said repeatedly that the power of prosecutors is limited and that it’s up to political leadership to do more to police itself. As he’s continued to lock up corrupt politicians and recently brought charges against nine individuals -- Cuomo aides, associates, and donors -- for alleged corruption related to the governor’s Buffalo Billion program, Bharara has insisted that prosecutors can’t do it all; that government culture must change.

“At the end of the day, cleaning up public corruption is not up to prosecutors,” Bharara said in Albany last February, during a speech sponsored by WAMC/Northeast Public Radio and good government groups. “We certainly have our role, to prosecute the wrongdoers and the bad apples, but we can’t do it alone. It will take leadership from the Legislature itself. And that’s what people crave; they crave leadership.”

Bharara -- whose investigations have taken down numerous legislators, including most recently, former Senate Majority Leader Dean Skelos and former Assembly Speaker Sheldon Silver -- has publicly criticized the concentration of power in the executive branch, Albany’s culture of secrecy, and the “three men in a room” style of government whereby major decisions are made by three top officials, the governor and two legislative majority leaders, behind closed doors.

Bharara has called on “good” lawmakers to take meaningful action to change the culture at the Capitol. Citing President Theodore Roosevelt, who, as a young New York Assembly member stood up to the ruling Tammany Hall political machine of the late 19th century. Bharara said at the February 2016 event, “It would be nice to see a little bit of that fight back in some of our legislators today.”

While Cuomo has overseen annual passage of new government ethics measures in Albany, they have virtually unanimously been seen as small steps, insufficient to adequately break the pattern of corruption and alter the culture that has made New York state government a national laughing stock. Cuomo continues to call for new measures, including more essential reforms that many say would help prevent corruption, not just punish it, but there is widespread doubt about how much Cuomo really wants to see them passed. The governor has been conspicuously quiet in terms of any effort to put public pressure on legislators to pass measures like public campaign financing, strict limits on electeds’ outside income, pay-to-play restrictions, and more.

Last year, Bharara’s crusade against corruption hit home for Cuomo, when the U.S. attorney’s office uncovered a massive bid-rigging, bribery, and kickback scandal related to the Buffalo Billion and announced charges against nine Cuomo associates, including Joseph Percoco, a longtime confidante of the governor’s, whom Cuomo said was “like a brother.” Cuomo, who Bharara made clear was not targeted in the investigation, claimed to have no knowledge of the alleged misconduct, instead placing the blame on bad apples and opaque purchasing and procurement processes. 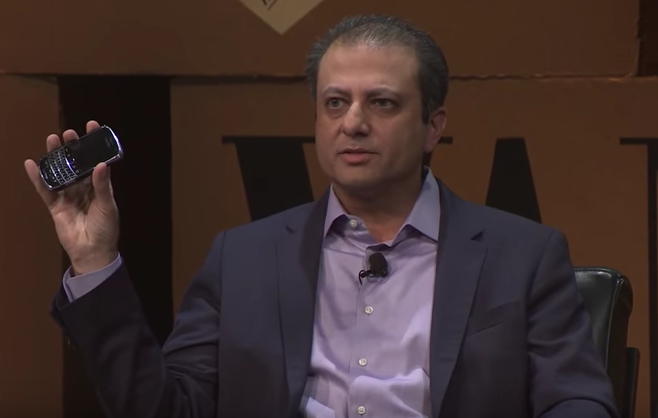 Critics, including Bharara, say the widespread pay-to-play scheme resulted in part from the fact that in 2011, Cuomo and the Legislature stripped the New York State Comptroller of its authority to review billions of dollars worth of economic development contracts related to SUNY not-for-profits, including the Polytechnic Institute. Comptroller Tom DiNapoli, government reform advocates, and some legislators have called for restoring those powers, but Cuomo has indicated he has no intention to do so. His cabinet meeting remarks were the latest evidence of that approach.

While Cuomo has acknowledged Albany’s pervasive corruption problem, he and Bharara apparently do not see eye to eye on how to fix it. The governor has pushed instead for increased punitive means to handle misconduct and some additional disclosure measures. A former New York State attorney general himself, Cuomo has frequently battled with oversight authorities like the comptroller and attorney general, currently Eric Schneiderman, taking steps to undermine the agencies and concentrate power under the executive branch.

During his last of six January 2017 State of the State addresses, Cuomo spoke in Albany, and called for the implementation of an ambitious ethics reform plan, hitting on many of the items pushed for by government reform groups, including transparency measures, restrictions on outside income for lawmakers, term limits, and the closure of the so-called "LLC loophole,” as well as a public campaign finance system.

The governor had promised to push some of these very reforms in his 2016 State of the State, but as critics have noted, little effort was made to sell them to the public or the legislative branch, and the few reforms that did pass meant little to stem the tide of corruption in state government.

Cuomo’s ethics plan also recommended an expansion of authority of the State Inspector General -- which answers to Cuomo -- to SUNY not-for-profits, and creating new Inspectors General for the Port Authority and the State Education Department. In light of the recent bid-rigging scandal, pressure has mounted on Cuomo to reinstate all of DiNapoli’s contract vetting powers. The governor has continued to undermine the comptroller, taking swipes at him over a series of audits that DiNapoli released related to the state’s economic development projects, and refused to support the restoration of those powers.

For his part, DiNapoli, who takes a decidedly less confrontational approach than Bharara, has called for restored vetting powers, but has been mostly muted as Cuomo’s office continue to push economic development programs through a system that appears to be easily exploited by bad actors.

DiNapoli has become slightly more vocal in recent months, but typically declines to engage in any ongoing, vocal push that conflicts with the governor.

Government watchdogs were quick to object to Cuomo's suggestion that prosecutors provide adequate independent oversight over state contracting. “The governor might as well be saying there is no need for police, because there are district attorneys. But everybody knows that the police -- and the Comptroller ---are there to prevent crime and ensure rules are followed. D.A.’s are only called on after crimes are committed. D.A.’s are no substitute for the independent oversight that the state constitution assigns to the Comptroller,” said John Kaehny, executive director of Reinvent Albany, a reform group, in a statement.

Government reform groups -- including Reinvent Albany, as well as Common Cause NY, Citizens Union, the Citizen Budget Commission, the Fiscal Policy Institute, the League of Women Voters, and NYPIRG -- called the governor’s oversight plan “stunningly inadequate,” and renewed calls to empower the comptroller to review and approve all state contracts over $250,000, among other reforms to the contracting process.

Cuomo’s office did not respond to a request for further explanation of the governor's remarks in time for publication. A spokesperson for Bharara declined to comment on Cuomo’s comments.