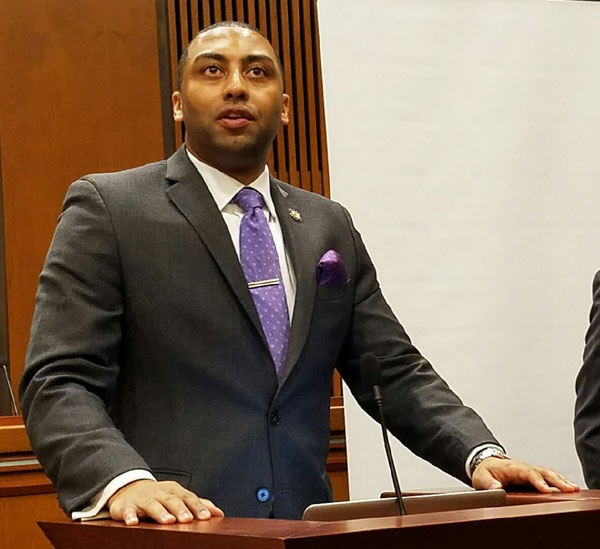 State Senator Jamaal Bailey knows his way around Albany. A University of Albany graduate, Bailey launched his legislative career as an intern for Assemblymember Carl Heastie, who is now Speaker of the Assembly and one of most powerful people in the state. Working for Heastie, Bailey was instrumental in pushing legislation to enact more stringent safety measures on nicotine-laced water, a bill that eventually became law, and one that he’s proud of today.

A Democrat who grew up in Co-Op City in the Bronx, Bailey went on to serve as District Leader for the 83rd Assembly District and, most recently, as Heastie’s community relations director. In 2016, state Senator Ruth Hassell-Thompson, representing parts of the Bronx and Mount Vernon, left the Senate for a position in Governor Andrew Cuomo’s administration. Bailey -- with the backing of the Bronx Democratic County Party -- ran for the 36th District seat, and won by a wide margin after beating four other candidates in a crowded primary.

Now, the youngest member of the Senate (Bailey is 34) is looking to make an impact outside of Heastie’s shadow. But, he faces a challenging climate on several fronts. At the top of the list is the fact that Democrats are in the minority in the state Senate, which makes moving priorities difficult.

In February, Gotham Gazette spoke with Bailey about starting his tenure as a state senator, making his voice heard, his priorities for the coming legislative session, and more.

GG: How is your first month at the Senate going? What’s the orientation like?

JB: I’m really excited about being able to lead the community that I’ve grown up in and to just be able to represent them in Albany. Honestly, it’s an amazing feeling; it’s an amazing pleasure.

The training is kind of hit the ground running. You get familiar with what’s in the building, the support staff and how they do it. But a lot of the preparation, it just comes in real time. Just seeing the bill and you have to vote on it. You go to committees and see what kind of policy is being advanced.

A lot of it is on-the-job training, despite the fact that my conference has done a lot in terms of getting me oriented and teaching me the ropes. But I feel like when it’s game time, it’s just a different feeling when it’s real.

GG: You got your start working for Speaker Carl Heastie, so you are familiar with Albany, but what’s your commute and living arrangement like?

JB: The commute itself isn’t bad. As you said, I used to work for the Speaker, so I’m used to it. I also went to University of Albany. The more difficult portion about the commute, the hardest part, is being away from my two daughters.

I drive; I’m on my own schedule. I know other members prefer the train and it gives them time to think and read and digest things, and I think that’s awesome, you know, to each their own. If I want to come down and see my family after a session, and drive back up, it gives me flexibility. I have a 2-year-old and 2-month-old.

GG: How do you connect with your 2-year-old during session? Facetime?

JB: Absolutely, I don’t know how my predecessors in the state Legislature did it before without Facetime -- and I don’t want to know. It’s not face-to-face interaction, but I get to see my wife and my children and even if I’m 150 miles away, it’s something positive.

GG: Where do you stay when you are in Albany?

JB: I generally try to stay uptown at the University of Albany. It’s a little bit out of the way, and I guess I’m familiar with the territory. Restaurants: The Wings over Albany was my college favorite — and I still frequent there — on Western Avenue.

Also, the City Line Diner is also on Western Avenue. My chief of staff, Jason, and I travel up there. Those are my favorite locations so far. The New World Bistro, a colleague introduced us to that location and it’s a pretty good place as well. Having been up here before, it helps. It’s a little different than being a student, but knowing where things like the mall is, and Target — those little things help.

GG: Have you had much floor time?

JB: I think I spoke on the floor four or five times [so far]. The first time I spoke was concerning a resolution concerning Martin Luther King Jr. Day. It was a honor to have that be my first time speaking on the floor of the Senate, at such a hallowed institution, and about such a revered individual, so I was honored to do that.

GG: What policies would you like to see passed this session?

JB: I’m solidly behind raising the age of criminal responsibility. As you know, New York State is one of only two states that prosecute 16- and 17-year-olds this way. It’s obviously much more nuanced than just a hashtag. I think it has to be well thought out and implemented properly, but I am hopeful that we can raise the age of criminal responsibility.

I would also like to see the Dream Act passed. There are so many folks that are undocumented individuals who are seeking an education and the Dream Act would be able to assist them. I’m also a huge proponent of local business cooperatives. I believe it could be a method of building community wealth that we really haven’t examined as a state, so I would like to direct my colleagues in that direction -- of taking a hard look at cooperatives as a form of economic development, which we haven’t as a state yet.

I’m also a proponent of making sure people are eating healthy. Trying to attack the issue of food deserts and eating healthy. These are all issues that I care about and I am honored of being one of a few individuals who has the honor of calling himself senator.

GG: Is it difficult being in the minority, particularly at a time when the Democratic conference is so fractured?

JB: You obviously would like to be in a position where you’re able to set policy and govern, but being in the minority, it doesn’t mean you don’t try. You still fight just as hard as I would if I was in the majority conference. I think it’s very important to me -- especially as a freshman -- to remember what I’m doing this for I need to make sure I’m advancing the wants and needs of my constituents.

It’s a different situation, but I am hopeful that we can one day come together and govern together as Democrats. That would be a goal to see that we can set some progressive policy, and ideal for the residents of the state of New York.

GG: Anything unexpected or surprising about working at the state Legislature?

JB: I would say that I am excited that I have a great staff, and I get to have great young folks that work for me. I am the youngest member of the state Senate now. On the first day of orientation I spoke to Senator [David] Carlucci [of the IDC] and he said told me, essentially -- and I’m paraphrasing -- “Congratulations, you are now the youngest senator.” It had formerly been Senator Carlucci.

There is a point a pride in being the the youngest member of a legislative body and I want to make sure I’m setting an example especially for the young people in my district, that you know, you can be anything you want to be. I spoke to two different groups today: I spoke to high school kids and for a Black History celebration, to third-to-fifth-graders. I want the children to know that I grew up in the Northeast Bronx just like them, and went to school there. I want the children in my district to know that being a state legislator was not something that I thought was within the realm of possibility. I want to be a shining example of what you could be if you work hard, and stay focused, and set goals for yourself.