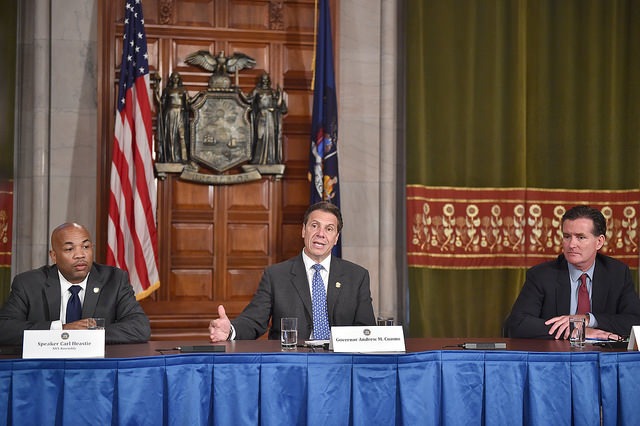 In one-house budgets passed this week, the state Legislature showed little evidence that new government ethics, voting, and campaign finance reform measures will be passed in Albany any time soon. This, despite persistent issues with public corruption, antiquated election laws, and the ongoing ability for wealthy interests to donate virtually unlimited sums to politicians.

Through his January State of the State tour, 2017 policy book, and executive budget, Governor Andrew Cuomo laid out his proposals for such measures -- an ambitious reform agenda, but one that the governor has done little to promote publicly since January.

On Wednesday, the Democrat-led Assembly aligned itself with Cuomo, a second-term Democrat, on measures like voting and campaign finance reform, while separating on other items related to transparency and budget control. The Republican majority in the Senate, on the other hand, rejected virtually all of Cuomo’s “good government and ethics” proposals.

The one-house budgets are statements of priority from the majorities of the two legislative houses, and set the stage for the final weeks of negotiation before a new state budget is agreed upon before the April 1 start to the new fiscal year. Government ethics, voting, and campaign finance reform do not appear to be particularly high on the list of priorities for Cuomo, the Assembly majority, the Senate majority, or the Senate’s Independent Democratic Conference (a group of eight breakaway Democrats that has a coalition agreement with Senate Republicans but nevertheless put forward its own conference budget resolution on Wednesday).

Both the Senate and Assembly majorities pushed back on Cuomo’s move to secure more control of the budget, specifically a provision Cuomo had outlined that would allow the governor to slash funding mid-year in the event of federal cuts without consulting the Legislature. The legislative majorities also both rejected Cuomo’s call for the creation of new inspectors general appointed by the governor’s office to oversee the Port Authority and the State Education Department. They also indicated that they oppose proposals that expand the powers of the state Inspector General and extend the state’s freedom of information law (FOIL) to the Legislature.

However, a major difference between the two chambers is the status of the infamous “LLC loophole,” which permits politicians to benefit from virtually unlimited corporate campaign contributions -- its closure, good government groups say, is essential to stemming pay-to-play politics and corruption.

An Assembly bill to close the loophole, sponsored by Assemblymember Brian Kavanagh, has passed multiple times with bipartisan support, and Cuomo has indicated he would sign the legislation if passed by both houses. Yet, the Senate has not brought such legislation to the floor for a vote, despite a companion bill existing for years.

Both Cuomo’s executive budget proposal and the Assembly’s one-house resolution recommend that LLCs be subject to the same campaign contribution limitations as other corporations and require that the owners of each limited liability company be disclosed, but the Senate GOP’s resolution makes no mention of the legislation. It vaguely indicates that the Senate will “consider modifications” to the governor’s ethics and good governance proposals. “Any ethics reform requires balanced and measured actions to ensure New Yorkers are best served by their public officials,” the Senate document states.

Senator Daniel Squadron, who sponsors the Senate bill to close the LLC Loophole, criticized the Senate Majority's removal of a measure from the budget resolution in a statement referencing the recent firing of U.S. Attorney Preet Bharara, who has famously crusaded against corrupt Albany lawmakers, including the former leaders of both legislative houses. "The vacancy in the Southern District of New York is a reminder that the Senate Majority must no longer be vacant on real ethics reform,” Squadron, a New York City Democrat, said in a statement. "There's a clear step to help get big money out of New York politics: closing the LLC Loophole. Taking that step will begin to reduce corruption and restore faith in government.”

On the Senate floor Wednesday, Squadron asked Senator Catharine Young, a Republican from Chautauqua and Allegany Counties who chairs the Senate finance committee, for confirmation that the Senate Majority will not block closure of the LLC loophole in the final budget.

Cuomo's wide-ranging, 10-point ethics reform agenda advocates for a public campaign financing system, early voting, and several additional measures that reform-minded advocates and legislators have been calling for, as well as others of his own.

One of the governor’s proposals would require lawmakers consult the Joint Legislative Ethics Committee regarding any outside income, but stops short of banning such income. Cuomo also wants to significantly cap the outside income legislators can make. Legislators addressed the proposal in February, when the Senate and Assembly passed a joint resolution requiring any legislator earning more than $5,000 in outside income to seek an advisory opinion from the Legislative Ethics Commission as to whether the employment is consistent with the Public Officers Law.

In their budget resolutions, the Assembly and Senate both call for increased disclosure and transparency requirements for the members of Cuomo’s 10 Regional Economic Development Councils (REDCs), which have been accused by lawmakers of self-dealing. The Legislature want to require council members to file annual financial disclosure statements, adhere to the Code of Ethics and FOIL requirements in the Public Officers Law, and abide by the open meetings law.

Cuomo and his allies have pushed back on the idea of these disclosure requirements, saying that the regulations would make it difficult to recruit new members, who are volunteers and typically successful businesspeople.

“Now several members want to derail the REDCs by requiring their members to disclose personal financial information to a degree that is inappropriate for a private citizen volunteer,’’ Virginia Horvath and Jeff Belt, co-chairs of the governor's Western New York regional economic development council, wrote in a Feb. 27 letter to Western New York legislators, according to the Buffalo News.

Meanwhile, in campaign finance reform, the Assembly is proposing new legislation to “prohibit housekeeping monies from being transferred or contributed out of the account to another segregated housekeeping account” or to be used “for political communications referencing a candidate.” An Assembly spokesperson confirmed to Gotham Gazette that this proposal is in response to tactics used by both Senate Republicans and the Independent Democratic Conference during recent election cycles.

While both Cuomo and Assembly Democrats favor creating a system of public campaign financing, perhaps similar to New York City’s, the Assembly did not specifically include that in its one-house and Senate Republicans in their one-house budget resolution again expressed opposition to taxpayer-funded campaigns. Senate Republicans also stated that they do not believe a full-time professional Legislature best represents the state -- meaning they do not want to see strict limits placed on legislators’ outside income.

The Senate majority also stated its objection to Cuomo’s proposal that the Legislature and the Legislative Ethics Commission become subject to the same freedom of information law provisions to which executive agencies are subject.

“The legislative process is inherently open to the public for input, scrutiny and review. In contrast, the public is made aware of many Executive agency activities only after they occur. As such, for purposes of freedom of information law, these branches are treated differently,” the Senate’s one-house resolution states.

The resolution notes that confidentiality is necessary with respect to the legislative ethics commission in order to encourage individuals to seek ethics guidance.

As for voting reform, the Assembly voted to agree with Cuomo’s calls for automatic registration and early voting, but recommends a period of early voting commencing eight days before an election rather than the 12-day window proposed by the governor. Like the rest of Cuomo’s reform proposals, the Senate did not give indication of support to voting reforms.

As usual, there was little drama in the Assembly, where Democrats hold a wide majority margin. But, in the Senate proceedings grew contentious Wednesday when mainline Democrats were forced, with little notice, to vote on two one-house resolutions, one for the Senate Majority and one for the Independent Democratic Conference (IDC). This, while Senate Democrats were blocked from submitting their own resolution for a vote. In a headed session on the Senate floor, Democratic conference members, led by Minority Leader Andrea Stewart-Cousins, objected to the unprecedented change in procedure, and expressed dismay that most of their policies were not represented in either the majority or IDC budget proposal.

Senator Michael Gianaris, deputy leader of the mainline Democrats, asked for his conference to have a chance to put forth its own resolution, a request that was denied by a chamber vote.

The IDC’s resolution, written in broader strokes than the Republican majority’s, suggests that its members are on board with all of the governor’s proposed ethics reforms, including closure of the LLC loophole. While the IDC has some influence with Senate Republicans given that the breakaway conference helps bolster the GOP’s razor thin majority, it is unlikely that influence will extend to significant ethics, voting, or campaign finance reform this year.

“The Governor has included comprehensive ethics reform in his Executive Budget proposal just as he has every other year," said Cuomo spokesperson Abbey Fashouer. "We strongly urge the Legislature to join us in this effort and pass these proposals this year.”