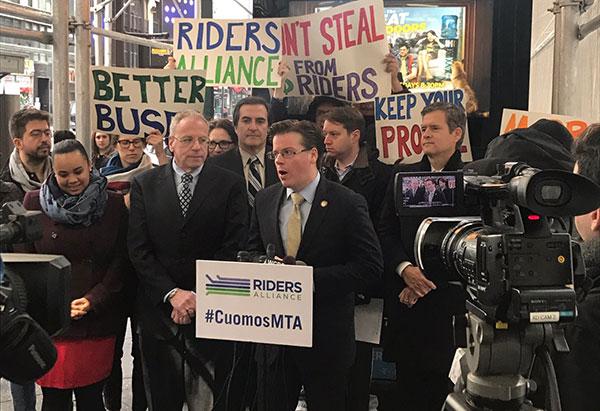 A lifelong resident of Windsor Terrace, Robert “Bobby” Carroll hails from something of a Brooklyn political dynasty. His grandfather co-founded the influential Central Brooklyn Independent Democrats (CBID) club, and, until he assumed his state Assembly seat, Bobby Carroll served as the club’s youngest president. Carroll previously worked as an attorney alongside his father, John Carroll, who has also served as CBID’s president, and in 2001 ran unsuccessfully against Mayor Bill de Blasio in a Democratic primary for City Council.

Carroll’s name recognition and political connections likely helped him shore up endorsements early in the race for the 44th Assembly District seat -- including from his now predecessor, Assemblymember James Brennan, who was retiring, other electeds, political clubs, and good government groups -- and now he is eager to make a name for himself as a progressive reformer on the state level.

Gotham Gazette spoke with Carroll in February about his priorities for the upcoming session, his first few weeks in the Legislature, and more.

GG: What was the orientation like? Was there a sexual harassment training?

RC: We took several ethics courses and general orientation. And I believe all Assembly members go through sexual harassment training every two years. I am not sure which ones were because I am a freshman and which are regular training sessions.

I noticed that you had the opportunity to to speak up on the floor in defense of the City Council’s plastic bag bill, despite the fact that the Legislature voted to block it. Were you disappointed with the way your chamber voted?

Well I voted no, so obviously I would have rathered us not override the City Council bill. But, you know, that’s part of politics and part of democracy, that you are not always going to agree with your colleagues. What I do think is really important in government — and it’s the reason I’m in government— is to be a voice for your constituents, and to be your own voice, so then you can stand up and say ‘this is what I think, this is what I’ve decided on this issue.’

I think it’s important to have an open and transparent debate so the vast views of our conference and our state are fully expressed on the floor of the Assembly and the state Senate, so that we can finally come to some type of agreement about how we are going to move forward in New York State.

GG: Are there bills you are working on? What are your priorities for the session?

RC: We are working on some of the bills that Assembly Member Brennan had. He had a lot of bills in the 32 years that he was in office. That is just one set of bills that we are working on. We are also working on a bunch of bills around electoral reform, criminal justice reform right now. These issues are very, very pressing.

We have the budget coming up, it's going to monopolize a lot of time for the next six weeks. [The budget] is...a very good litmus test for what we care about in the state, what we are going to spend money on. I think it's absolutely imperative that we make sure that we fully fund our public school system in New York City. If you look at the CFE [Campaign for Fiscal Equity], we are still short about $1.6 billion. It’s very, very important to have that fully funded.

I think it’s very, very important to really dig down deep and see if we are actually funding the MTA capital budget through 2019. I think the projections that some folks have on operating funds that are going to come in through tolls and fares and other ways of raising revenues for the MTA are very optimistic. But we need to have very, very tough conversations about how we are investing in our education and our infrastructure. If we are investing in our infrastructure, those are great ways to spur business and create better lives for New Yorkers.

GG: Are you enjoying Albany? The commute? Any favorite restaurants?

RC: I really like it. I take the train up. I enjoy the train — it’s a beautiful train ride on Amtrak. It’s quicker than driving most of the time. It’s only about two-and-a-half hours from Penn Station and from where I live it’s only about 30 minutes on the subway to Penn Station, so it’s really quick.

I usually writes some emails, read the paper. There’s WiFi, so I’ll usually watch something on Netflix. When I’m up there I’ve been hopping around, a couple hotels, bed and breakfasts, kind of getting the lay of the land and a couple of different neighborhoods in Albany. I don’t drive, so I like to be within a 10- or 15-minute walk to the Capitol.

I went out with my parents to Jack’s Oyster House — that was pretty cool, I really like that place on State Street, they have good oysters and pretty good steak. It’s a little expensive for a legislator to be going there often. There are a couple of different bars and restaurants a couple of Assembly members and I -- and some other folks -- have gone out to on occasion. But we are also in chambers a lot, just this Monday we were in chambers until 10:30 [p.m.]. So it's not a place where it's like happy hour every night. It’s 6:30 [p.m.] and people are like, ‘Oh, well, what are we going to do?’

GG: Any moment you are particularly proud of or any disappointments, such as the plastic bag issue, for example?

RC: I wouldn’t consider the plastic bag thing a disappointment. I spoke up on behalf of my constituents and what I thought was right. I think if you are going to be in politics, you have to understand that you’re not going to win every fight, and you have to be ready to stay in the arena. I think there are going to be a lot of issues like that. I used to practice election law before I got here. We were with Attorney General Schneiderman...when he introduced his package of reforms.