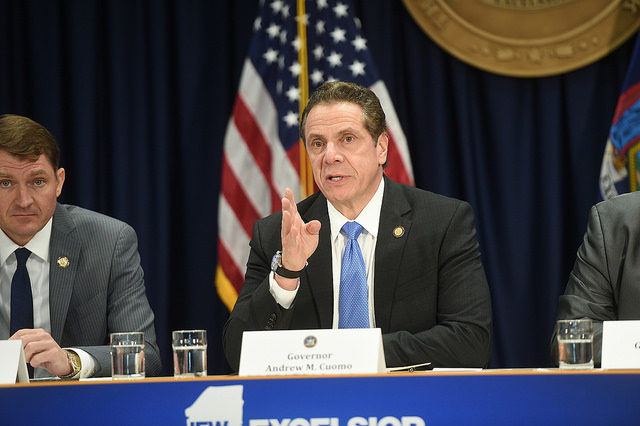 Governor Andrew Cuomo all but confirmed Tuesday that major voting reforms he’s proposed would not be part of the new state budget, which is due by April 1.

In January, Cuomo outlined the “Democracy Project” as part of his 2017 State of the State agenda, and included its widely prized measures like early voting, same-day voter registration, and an enhanced form of automatic voter registration in one of his budget bills. But, on Tuesday Cuomo indicated that the push to modernize New York’s antiquated voting laws would be left for the April through June legislative session that follows budget adoption.

Cuomo, a second-term Democrat, has proposed sweeping voting reforms before, and New York has watched as they have been implemented with successful results in dozens of other states, while paltry voter turnout continues here.

On Tuesday, Cuomo appeared at a press conference in New York City, which the governor had called to criticize two Republican congressional representatives from New York for authoring amendments to the federal health plan that would shift certain Medicaid burdens in New York from the counties to the state. During the question-and-answer session, a WNYC reporter asked Cuomo how he would be able to persuade Senate Republicans to adopt his voting reform agenda during budget negotiations.

“We are going to try like heck,” he said, but added, “It’s not necessarily a budget discussion,” conceding a point Cuomo is typically hesitant to make.

“The budget is primarily about finances,” Cuomo continued. “If there’s a policy matter that is related to the finances then I try to include it, because the budget is a good vehicle to reconcile as much as you can. Many of the democracy issues that you talk about we are going to take up after the budget.”

Between now and April 1, Cuomo and legislative leaders will negotiate the details of the new state budget. The Governor sets the stage for budget season with his Executive Budget in January, which is then followed by legislative hearings, one-house budget resolutions that respond to the Governor’s proposals, and closed-door negotiations. The spending and policy pieces that make it into the budget often depend upon how much priority agenda items are given by the Governor, the Senate Majority, and the Assembly Majority.

Cuomo, as the most powerful of the “three men in the room,” can often push through his top priorities, as he did last year with $15 minimum wage and paid family leave programs.

In January, Cuomo announced the Democracy Project in a press release amid his six-stop State of the State tour. The goal, Cuomo's announcement stated, was “modernizing voting in New York to increase participation in the democratic system.” The Democracy Project “will remove barriers to voter registration" and "make voting easier for New Yorkers.”

“Early voting will shorten lines at the polls,” the announcement stated, “allow New Yorkers to cast ballots up to 12 days before Election Day.” It also promised that automatic and same-day voter registration “will increase voter participation.”

While Democrats who control the Assembly appear open to the three voting reforms, among others, they do not appear to be placing it especially high on their list of priorities. Republicans who control the state Senate are opposed to voting reform, worrying that greater turnout could spell the end of their paper-thin majority margin.

Two of the three reforms, early voting and automatic registration, are widely implemented throughout the country, and would be easy to implement legislatively, but have stalled in the Senate. Along with the Assembly majority, the Independent Democratic Conference, a breakaway group of Senate Democrats who have a ruling coalition with Republicans, also support the measures. However, the IDC’s power to move the GOP conference in this case may be especially limited.

Same-day voter registration, which would allow unregistered voters to register and vote on Election Day, would likely have to be implemented through a state constitutional amendment, which requires the approval of both legislative houses for two consecutive legislative cycles and then approval by the public through a ballot vote.

Last week, representatives from advocacy groups like the New York Civil Liberties Union, the Working Families Party, and Common Cause NY joined with female state lawmakers at the state Capitol to push for early voting and automatic registration to be included in the budget. The press conference, which coincided with Women’s History Month and framed voter inclusion as a women’s issue, was followed by a rally on Sunday in New York City’s Battery Park.

Susan Lerner, executive director of Common Cause NY, who helped organized the press conference and the rally, criticized the governor’s Tuesday revelation.

“It's not enough to ‘try like heck,’” Lerner said in a statement. “New Yorkers deserve the same rights as voters in Alaska and Vermont. We need voting reform now, and that means including funding in the 2017 budget to ensure that the next election cycle is an example for the nation, not a national embarrassment."

Lerner noted that New York ranked 41st in the nation for voter turnout (based on the 2016 presidential election), with less than a third of eligible voters participating. “Far from the progressive symbol the Governor likes to tout, we are out of step with 34 other states that have some form of early voting, and nowhere near California which also has Automatic Voter Registration,” Lerner said.

On Tuesday Cuomo did not cast blame on anyone for what he was foreshadowing as a failure to move voting reform through the budget. At the press conference, however, he did tout how well he has been able to work with Republicans over the past six years. He did not indicate that he planned to try to convince Senate Republicans to back his voting reform agenda.

A few days ago, Scott Reif, a spokesperson for Senate Republicans, told WNYC radio, "There are many bills out there which seek to boost voter participation. We'll take a look at all of them."

***
by Ben Max and Rachel Silberstein