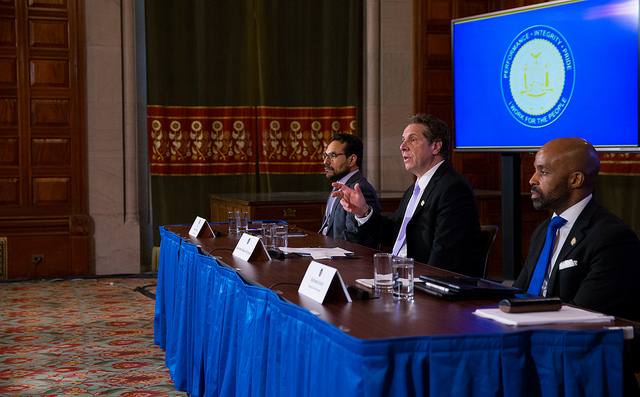 At just before 9 p.m. Friday night, Governor Andrew Cuomo announced that he had reached a deal with state legislative leaders on a $153 billion budget for the new fiscal year, which began one week ago.

Cuomo and the Legislature had passed a budget “extender” on Monday to keep state operations running, but continued to negotiate throughout the week in order to put a full fiscal year budget together. After several fits and starts, many rumors, and several late nights, a deal was reached Friday on the most contentious issues. The two legislative houses are expected to vote the final budget bills through over the next several days.

Speaking from the Capitol’s Red Room on Friday evening, Cuomo said that the deal included a great deal to boast about, and that state leaders had met “all challenges” facing them. He took the most time on four items.

First, calling it a “legacy accomplishment,” Cuomo highlighted a deal on raising the age of adult criminal responsibility from 16 to 18 years old for most crimes, an issue that had been a major sticking point in negotiations. According to the presentation Cuomo gave, it appears the policy will be implemented as of October 1, 2018.

Cuomo also spoke highly of an agreement on a “first-ever federal funding response plan,” which gives his budget office the opportunity to make mid-year budget adjustments based on cuts from Washington, D.C. The policy allows the Legislature to pass its own response plan within 90 days, or the executive branch proposal would go into effect.

Third, the governor highlighted an agreed upon plan to find county-level efficiencies. And fourth, Cuomo touted a college affordability plan that will, when phased in over three years, make public colleges and universities tuition-free for students from families making $125,000 per year or less. Cuomo had launched his 2017 agenda with this proposal, alongside Senator Bernie Sanders, known as the Excelsior Scholarship.

The governor also announced agreements on almost all other measures that had been causing a budget hold-up or that were on the table generally, including but not limited to a new 421-a property tax abatement program meant to spur affordable housing in New York City; education aid to municipalities; a measured increase in aid to charter schools; release of $2 billion in affordable and supportive housing funds; extension of the millionaires’ tax for two years; legalizing ride-hailing apps outside New York City, where they are already legal; indigent legal defense funding; a major clean water infrastructure plan; union dues tax deductions; and more.

Notably, there is no extension of mayoral control of New York City schools in the budget, meaning Mayor Bill de Blasio will have to seek an extension in the legislative session to come between now and mid-June.

And, there was no movement on government ethics, campaign finance, or voting reforms. At the Friday press conference, Cuomo told Gotham Gazette that he was not able to get the Legislature to agree on reforms. “By the way,” Cuomo added, “if you think Raise the Age was hard, you have to see ethics." Cuomo, who had outlined an ambitious reform agenda in January, did little to push it thereafter and even appeared to forget its existence on Wednesday night at his prior Red Room press conference.

Despite their recalcitrance on ethics, Cuomo was still full of praise for legislative leaders, however. "It's easy to be political. It's not always easy to be a responsible government leader,” Cuomo said in praising Democratic Assembly Speaker Carl Heastie, Republican Senate Majority Leader John Flanagan, and Senate Independent Democratic Conference Leader Jeff Klein, the men who were Cuomo’s top negotiating counterparts. None were in attendance as Cuomo briefed reporters Friday night. The governor was instead flanked by his budget director, Robert Mujica, and his counsel, Alphonso David.

The budget, Cuomo said in a statement, “advances the core progressive principles that built New York: investing in the middle class, strengthening the economy and creating opportunity for all.”

The agreement keeps spending growth to 2 percent, Cuomo also made sure to note, which continues his self-imposed cap. The governor was able to do this by freezing the budgets of most state agencies, as he has done in the past. The budget includes state operating funds spending of $98.1 billion -- this excludes federal funds and capital spending. With federal funds included, the plan reaches $153.1 billion. It includes an increase in overall education aid of $1.1 billion, bringing the total to $25.8 billion, or an increase of 4.4 percent, according to Cuomo’s office. Another area of growth in spending is Medicaid, on which the state will spend $23.5 billion.

In the budget extender, Cuomo had already pushed through billions in funding to continue his economic development and infrastructure programs across the state -- these funds remain, the governor said, and he highlighted the fact that there is funding in the budget to build the Empire State Trail, his proposal to connect a biking, walking, and hiking trail from New York City to Albany, and Albany north to Canada and west to Buffalo.

The millionaires’ tax extension will affect 45,000 taxpayers, Cuomo’s office says, 50 percent of whom are non-residents, and will preserve $3.4 billion in revenue for the year. This helps offset a middle class tax cut that is being phased in.

For his part, Senate Majority Leader Flanagan highlighted, in a statement, that “our state spending plan meets the needs of middle-class taxpayers and their families and advances key initiatives to make our state more affordable.” Flanagan touted that the budget “rejects new fees and protects one of the biggest and boldest tax cuts in state history, makes the largest ever investment in clean water, helps families better afford the high costs of college and ensures all of our schools have the resources they need to give students a high-quality education.”

He also highlighted “workers’ compensation reforms to cut costs and help businesses create jobs,” full funding for “direct care professionals who treat our most vulnerable citizens” and “more than $200 million available to fight and win the battle against heroin and opioid addiction.”

It will require more complete review of budget bills to know if a variety of funding cuts and cost shifts from the state to New York City are included. As is typical in Albany, the budget will be passed with little review of the details by legislators or the public, helped along by "messages of necessity" from the governor, which waive the otherwise-required three-day aging period for bills.

With reporting from Albany by Rachel Silberstein.